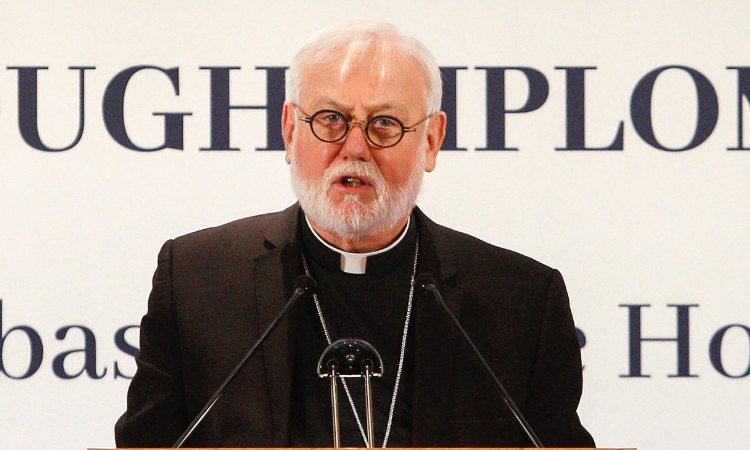 Secretary for Relations with States of the Holy See

I am grateful for the invitation to offer brief remarks at the opening of this Symposium on “Advancing and Defending International Religious Freedom through Diplomacy” and wish to thank Ambassador Gingrich and her staff in the Embassy for organizing this event.  I happily extend to you all the greetings of His Holiness, Pope Francis, who is aware of this meeting on a topic of great importance for the Holy See, especially in its diplomatic activities on both the bilateral and multilateral levels.

Over the past couple of decades, there has been a growing recognition of the important role that religions play in the questions of international peace and security and of mutual coexistence among peoples.  More recently, a number of Governments, including the United States of America, have launched initiatives that seek to defend and promote this fundamental human right, the respect of which is a sine qua non for giving full respect to each person and in building the common good of humanity.

It should come as no surprise that the protection and promotion of religious liberty is one of the main “political priorities” of the Holy See.  In its bilateral relations, the question of protecting religious freedom so as to allow the local Catholic Church to exercise its mission, remains an indispensable part of the scope and activity of the Holy See.  Likewise, in various multilateral fora, the Holy See is attentive to the trends and attitudes of the international community as it addresses issues related to the freedom of religion and belief. It also pays particular attention to how other so-called “new rights” limit the full enjoyment of religious freedom, as well as the important role that the Church and other faith-based organizations play in numerous charitable, health, educational and humanitarian efforts throughout the world.

Religious freedom is not only important to the Holy See because it is governed by the Supreme Pontiff of the Catholic Church. Instead, the motivation for defending religious freedom rests primarily on its understanding and concern for the ontological reality of the human person, created in the image and likeness of God, the foundation of man’s inviolable dignity.  The Creator has endowed human nature with knowledge and free will in order to come to know, to love and to serve Him in complete liberty.  Freedom, and in particular freedom of conscience and religious liberty, is an essential component of man’s transcendent dignity.  As such, coercion, violence and discrimination against religious liberty constitutes an attack upon the human person, his relationship with his Creator, and, indeed, an attack against society.  It is from this perspective that the Holy See has even sought to defend this fundamental human right, because it is foundational to each person’s identity and to the free exercise of one’s liberty for the integral development of each person and of society as a whole.

It is in this context that the Holy See has been assiduously and constantly attentive to abuses to religious liberty, whether on the level of authoritarian/dictatorial State or non-State actors, most vividly witnessed in those instances where there is physical persecution and even murder of “religious minorities”, or whether through the ever more common tendency, especially found in the West, which promotes ideologies and even national legislation that conflicts with the exercise of religious liberty.  I think it is important to be aware of the fact that attacks against religious liberty are not only coming in the form of physical persecution, but ever more through ideological trends and “silencing”, through what has often been called “political correctness”, which are taking ever larger liberties in the name of “tolerance” and “non-discrimination”.  Rather, these inflexible ideologies, which are quick to denounce religious beliefs and persons that do not accept their position as “hateful”, are themselves rather “intolerable” and “discriminatory” against the freedom of religion.

There are a growing number of examples of this phenomenon, including a number of States passing legislation aggressively attacking both the freedom of conscience and the freedom of religion.  It is even present within the certain sectors of multilateral diplomacy.  A recent report from the UN Human Rights Council regarding the freedom of religion and belief actually claimed that “The Special Rapporteur is deeply concerned at numerous reports he has received, and at information provided to other United Nations human rights mechanisms, alleging that religious interest groups are engaged in campaigns characterizing rights advocates working to combat gender-based discrimination as ‘immoral’ actors, seeking to undermine society by espousing ‘a gender ideology’ that is harmful to children, families, tradition and religion. Invoking religious tenets as well as pseudoscience, such actors argue for the defence of traditional values rooted in interpretations of religious teachings about the social roles for men and women in accordance with their alleged naturally different physical and mental capacities; often calling on governments to enact discriminatory policies.” (n. 34).

The Holy See responded clearly to this report during the interactive debate with the following: “Particularly unacceptable and offensive are the numerous references that recommend that freedom of religion and belief and conscientious objection must be surrendered for the promotion of other so-called “human rights”, which certainly do not enjoy consensus, thus being a sort of “ideological colonization” on the part of some States and international institutions. As such, the report, at least in part, is actually an attack on freedom of religion and belief as well as freedom of conscience” (Holy See Mission, Geneva, 2 March 2020).

If I were a cynic, I would say that it seems that some of those who should be defending and promoting religious liberty either lack the willingness truly to do so or seem to be kowtowing to the prevalent ideological forces that see the exercise of religious liberty as a threat their own concept of liberty, which is understood in large part as the ability do whatever one wants, affirming oneself without any restriction whatsoever, including civil, natural and especially divine law.

Notwithstanding these difficulties and threats to religious liberty, including to the other fundamental human rights connected to it, the Holy See is convinced that remaining present and active in the debates and discussions on this topic must continue.  Pulling away from the discussion is not only a disservice to those who are the voiceless, who are persecuted, mocked, discriminated against or even killed because of their religious convictions, but to those who disagree with us. They also need to understand the gravity of what is at stake.  The Holy See, with its unique mission and according to its particular nature, utilizes the diplomatic tools at its disposal, especially that of providing a sort of “moral compass”, in building religious freedom and other fundamental human rights among other States and within the family of nations.  While the Holy See lacks the “customary” diplomatic tools employed by most States, it does have a rich and long-standing body of social teaching that has been developed over the centuries and which it brings to the political and diplomatic discussion.

The commitment of the Holy See in the defence and promotion of religious liberty is guided by the teaching and engagement of Pope Francis, who has continually stressed the importance of dialogue and mutual understanding among peoples and societies, among those of different religious convictions, or those without, to work towards peaceful coexistence and reciprocal respect.  This is the heart of the message on the Document on Human Fraternity of 4 February 2019 and will undoubtedly be a prominent theme in the Encyclical Letter “All Brothers” which the Holy Father will release in a few days’ time.

In closing, I would like to cite a line from the Document on Human Fraternity: “This divine wisdom is the source from which the right to freedom of belief and the freedom to be different derives. Therefore, the fact that people are forced to adhere to a certain religion or culture must be rejected, as too the imposition of a cultural way of life that others do not accept.”

I hope that discussions and exchanges that take place here today may be productive, insightful and facilitate the protection and promotion of religious liberty, which we all hold very dearly.

Thank you for your kind attention.