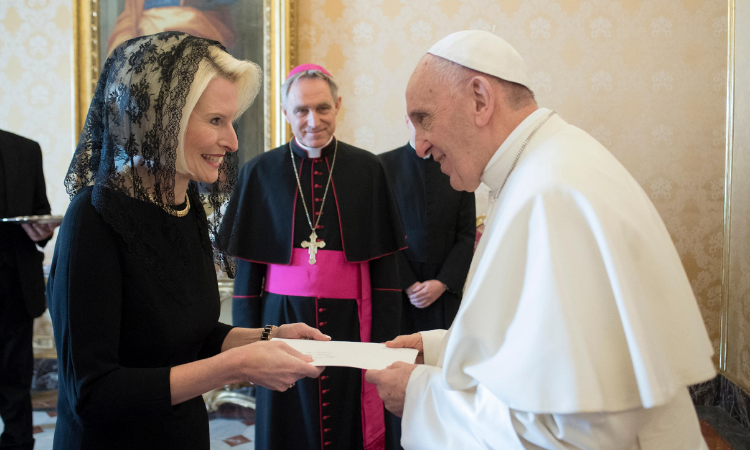 Callista Gingrich, the U.S. ambassador designate to the Holy See, presents her credentials to Pope Francis during a private audience at the Vatican, Friday, Dec. 22, 2017. (Credit: L'Osservatore Romano/Pool Via AP.)

ROME – Perhaps illustrating part of the logic for a new “ministerial” on religious freedom, meaning a gathering of government representatives at the minister’s level to be hosted by U.S. Secretary of State Mike Pompeo in July, U.S. Ambassador to the Holy See Callista Gingrich says it’s critical that China be pressured to clean up its act.

“We need to continue to speak the truth and call out religious persecution, regardless of where it occurs,” Gingrich told Crux. “Until the Chinese government alters its counterproductive policies towards people of faith, the United States will continue to voice its concern.”

Gingrich, who’s served as U.S. President Donald Trump’s envoy to the Vatican since December 2017, spoke ahead of an April 3 event titled “Stand Together to Defend International Religious Freedom,” co-sponsored by her embassy and the #StandTogether Project, a digital platform devoted to publicizing anti-Christian persecution.

Italian Cardinal Pietro Parolin, the Vatican’s Secretary of State and hence the pope’s top diplomat, is scheduled to speak at the event.

At a first-ever ministerial conference on religious freedom convened by Pompeo last year, among the featured speakers was a Chinese Uighur Muslim forced to serve in a labor camp for several years. Gingrich insisted that’s not an isolated case.

“What’s happening in the Xinjiang Uighur Autonomous Region in China is truly shocking,” she said. “We estimate that Chinese authorities have detained more than one million Uighurs, ethnic Kazakhs, and other Muslim and minority groups, in what can only be described as internment camps. These groups are subjected to torture, repressive surveillance measures, confiscations of Qurans, and instances of sexual abuse and death.”

“China’s claims that these camps are ‘humane job-training centers’ are outright falsehoods,” Gingrich said, “and are disproven even by evidence from China’s own government documents.”

In late March, U.S. Ambassador for International Religious Freedom Sam Brownback was critical of China’s record during a trip to Hong Kong and Taiwan – and also critical of the Vatican for making a deal with China last September regulating the appointment of bishops.

In a speech in Hong Kong, Brownback warned that the Vatican accord will embolden a “war on faith” throughout the country.

“Remember, it had never been done before,” she said. “Over 80 foreign delegations were present, including the Holy See, which was represented by [British] Archbishop [Paul] Gallagher [the Vatican’s Secretary for Relations with States.]”

What made it work, she said, “was the courageous participation of victims of religious persecution. Individuals from numerous faiths and backgrounds were present.”

“I remember vividly hearing Nadia Murad talk about what she went through at the hands of ISIS in Iraq, and I hope survivors of religious persecution will play a major role in this year’s gathering as well,” she said.

Gingrich said the protection and promotion of religious freedom is a core principle of Trump’s foreign policy.

“Religious freedom is America’s first freedom,” she said. “The earliest pilgrims sailed to our shores looking for a new world where they could practice their faith without persecution.”

“President Trump values the fact that religious liberty is a foundational part of our nation’s history and identity, [and] he’s committed to leading the world by example,” Gingrich said. “The Trump Administration also understands that religious freedom is in the interest of global peace and security. Countries that protect and promote religious freedom are more peaceful, prosperous, and secure.”

As a concrete for-instance, Gingrich pointed to the financial assistance the U.S. is now delivering to Iraq and Syria – more than $300 million since 2017 to Iraq, and the U.S. is the largest single humanitarian donor to Syria.

“The aid is helping persecuted minorities heal and restore their communities, improve security, support economic recovery, and prevent future atrocities from groups such as ISIS,” she said.

“We’re making sure U.S. assistance is getting to the right place and is being implemented urgently in close partnership with local faith and community leaders,” Gingrich said. “The Trump Administration has demonstrated that our commitment to improving the humanitarian crises in Iraq and Syria is ironclad.”

In general, Gingrich said, the relationship between the United States, by consensus the world’s most important “hard power,” and the Vatican, arguably the most influential “soft power,” is critical.

“Our relationship is crucial to advancing religious freedom and human rights in general around the world,” she said.

On the 14th anniversary of the death of St. John Paul II in 2005, Gingrich offered an example from the John Paul era.

“Religious freedom was one of the foundational reasons our partnership was formalized by President [Ronald] Reagan and John Paul II in 1984,” she said. “The President and the Pope saw the clear need for the United States and the Holy See to work together to roll back the devastation of Soviet Communism, which had already claimed tens of millions of lives, and we ultimately succeeded.”

“We may have different approaches,” Gingrich said, “but we fundamentally agree on the need for everyone, in every nation, to be afforded the God-given right to practice their faith freely.”

Gingrich said inter-faith dialogue is another area where Trump and the Vatican see eye-to-eye.

“I think recent visits to the UAE and Morocco were fantastic examples of the pope’s commitment to this endeavor,” she said.

“President Trump fully appreciates the importance of interfaith dialogue to build bridges in order to facilitate peace and fraternity,” Gingrich said. “His first official overseas trip was to the three centers of Abrahamic faith – Saudi Arabia, Israel, and Vatican City.”