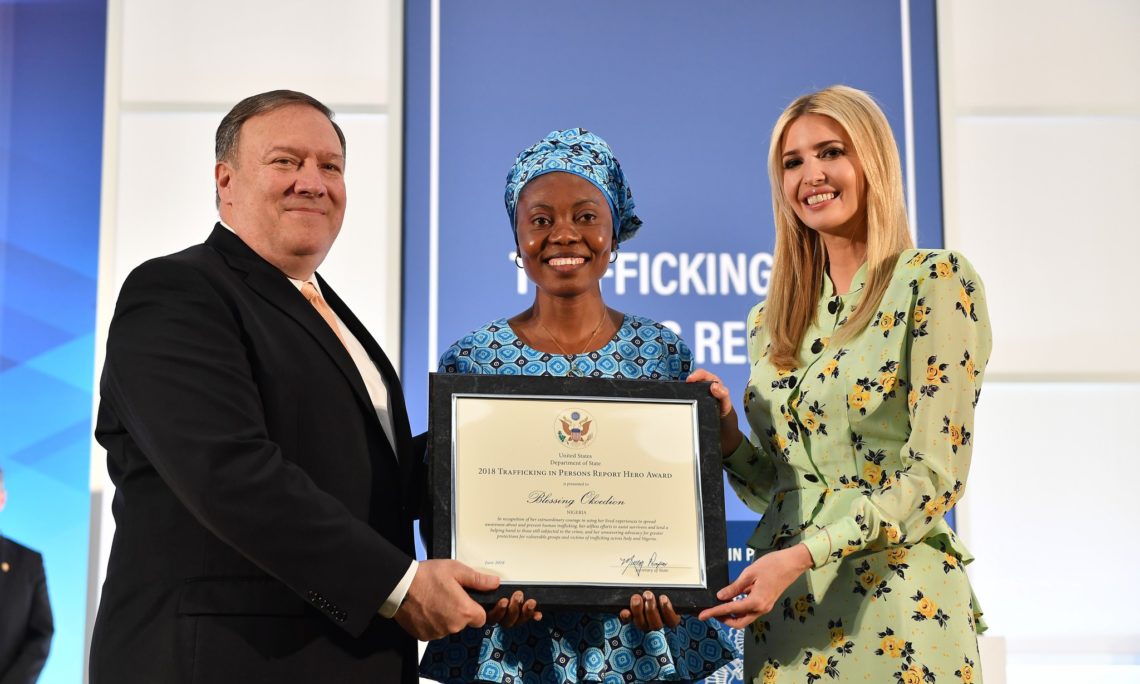 Human trafficking, also known as modern slavery, is a global crime that deprives millions around the world of their human dignity and freedom. Its victims are often lured with false promises by people they trust – including family members – and are forced into prostitution, debt bondage, domestic servitude, and other forms of modern slavery.

The United States is fighting human trafficking on all fronts, engaging in robust domestic and international efforts.

On October 11, President Trump convened this Administration’s first meeting of the President’s Interagency Task Force to Monitor and Combat Trafficking in Persons (PITF). He vowed that America “will not rest until we have put these vile organizations out of business and rescued every last victim.”

The Trump Administration understands that the path to ending human trafficking demands action, but also cooperation.  No single government or individual can fight it alone. Governments, faith-based organizations, civil society, and survivors must work together.

This is why members of the U.S. Advisory Council on Human Trafficking, comprised of survivor leaders representing a diverse range of backgrounds and experiences participated in last week’s meeting.  These leaders, appointed by President Trump, provide a formal platform for trafficking survivors to advise and make recommendations on federal anti-trafficking policies to the Task Force.

It’s also why each year, the U.S. Department of State recognizes the Trafficking in Persons (TIP) Report Heroes – brave individuals who dedicate their lives to this cause. They are celebrated for their tireless efforts – despite resistance, opposition, and even threats to their lives – to protect victims, punish offenders, and raise awareness of ongoing criminal practices in their countries and abroad.

As U.S. Ambassador to the Holy See, I’ve had the privilege and honor of working with one of these extraordinary individuals: Blessing Okoedion.

Blessing is a survivor, an activist, an author, and a fierce protector of victims suffering under the evil of human trafficking.  She has helped a multitude of women escape this horror.  Her advocacy on their behalf has saved numerous lives.

In June, Secretary of State Mike Pompeo recognized Blessing and nine other individuals with the 2018 TIP Report Heroes award.  I couldn’t have been more proud of her selection.

Prior to her work in fighting human trafficking, Blessing worked as a computer technician in Nigeria.  A recruiter found her through her local church and offered Blessing, a college graduate, a job in Spain in a tech store, where she could have a better life.  When Blessing arrived at the airport in Benin City, an immigration agent told her that her visa was fake.  She was allowed to board the flight anyway.

Blessing never stepped foot inside the tech store.  After arriving in Spain, her exploiters took her to Naples, Italy and forced her into prostitution.  Her traffickers told her that she owed them over $70,000 to cover travel and recruitment costs.  After four days on the street, Blessing managed to escape.  Her perseverance took her to Casa Rut, a shelter operated by Ursuline nuns in nearby Caserta, Italy.

During an April 11 symposium hosted by our embassy, Blessing explained how the sisters of Casa Rut provided her with shelter and care.  Blessing has written a book, Il Coraggio della Libertà – The Courage of Freedom, to help others better understand the horrors of human trafficking.  Today she works as a cultural mediator and an advocate for women forced into human trafficking networks.

We desperately need heroes like Blessing Okoedion in the fight against modern slavery.  Her perseverance and advocacy is an example of how trafficking victims can overcome, thrive, and help others to do so as well.

Leveraging input from human trafficking survivors is critical to combating human trafficking.  Doing so strengthens federal policy and programming efforts.  As Secretary of State Pompeo explained at last week’s Task Force meeting, survivors, “set a courageous example of service for the United States, and for the world, by choosing to transform their harrowing experiences into powerful advocacy.”

The Holy See, like the United States, understands and appreciates the crucial role survivors play in the fight against this global evil.  Pope Francis has called for a victim-centered approach to this endeavor, a method U.S. law enforcement has adopted for some time.

Under President Trump’s leadership, the United States will not rest until human trafficking is eradicated.  And the U.S. Embassy to the Holy See will continue to join heroes like Blessing Okoedion and our Vatican partners in this cause.

Editor’s Note: This entry also appears in the U.S. Department of State’s publication on Medium.