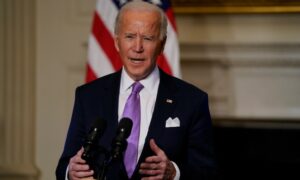 Today, we join together with people from nations around the world to commemorate International Holocaust Remembrance Day by remembering the 6 million Jews, as well as the Roma and Sinti, Slavs, disabled persons, LGBTQ+ individuals, and many others, who were murdered by the Nazis and their collaborators during the Shoah. We must never forget the truth of what happened across Europe or brush aside the horrors inflicted on our fellow humans because of the doctrines of hatred and division.

I first learned about the horrors of the Holocaust listening to my father at the dinner table. The passion he felt that we should have done more to prevent the Nazi campaign of systematic mass murder has stayed with me my entire life. It’s why I took my children to visit Dachau in Germany, and why I hope to do the same for each of my grandchildren — so they too would see for themselves the millions of futures stolen away by unchecked hatred and understand in their bones what can happen when people turn their heads and fail to act.

We must pass the history of the Holocaust on to our grandchildren and their grandchildren in order to keep real the promise of “never again.” That is how we prevent future genocides. Remembering the victims, heroes, and lessons of the Holocaust is particularly important today as Holocaust deniers and minimizers are growing louder in our public discourse. But the facts are not up for question, and each of us must remain vigilant and speak out against the resurgent tide of anti-Semitism, and other forms of bigotry and intolerance, here at home and around the world.

The horrors we saw and heard in Charlottesville in 2017, with white nationalists and neo-Nazis spewing the same anti-Semitic bile we heard in the 1930s in Europe, are the reason I ran for president. Today, I recommit to the simple truth that preventing future genocides remains both our moral duty and a matter of national and global importance.

The Holocaust was no accident of history. It occurred because too many governments cold-bloodedly adopted and implemented hate-fueled laws, policies, and practices to vilify and dehumanize entire groups of people, and too many individuals stood by silently. Silence is complicity. As my late friend and Holocaust survivor Tom Lantos so frequently reminded us: “The veneer of civilization is paper thin. We are its guardians, and we can never rest.”

When hatred goes unchecked, and when the checks and balances in government and society that protect fundamental freedoms are lost, violence and mass atrocities can result. The United States will continue to champion justice for Holocaust survivors and their heirs. We are committed to helping build a world in which the lessons of the Holocaust are taught and in which all human lives are valued.