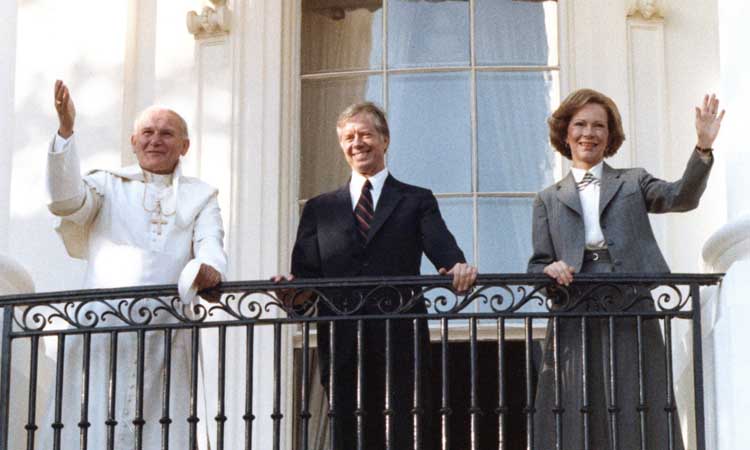 On October 6, 1979, during the first of seven apostolic journeys to the United States, Pope John Paul II became the first pontiff to visit the White House. After meeting with President Jimmy Carter, the two leaders addressed nearly 10,000 guests on the South Lawn. In his address, the 59-year-old Polish pope said to the adoring crowd, “I wish to commend those in public authority and all the people of the United States for having given, from the very beginning of the existence of the nation, a special place to some of the most important concerns of the common good.”

Saint John Paul II’s visit to our nation’s capital was the final stop of a weeklong visit to the United States. In all he visited six cities and delivered 69 sermons and speeches.

Less than three years after this historic journey, in 1982, Saint John Paul II welcomed President Ronald Reagan to Vatican City; their first meeting after years of correspondence and friendship. Two years later, in 1984, these visionary leaders established formal diplomatic relations between the United States and the Holy See.