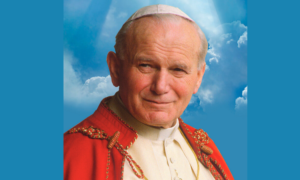 On May 18, we commemorate the 100th anniversary of the birth of Saint John Paul II and celebrate his remarkable legacy.

Born Karol Józef Wojtyła on May 18, 1920, in Wadowice, Poland, Saint John Paul II overcame astonishing difficulties with grace and perseverance. As a young man in Nazi-occupied Poland, he studied for the priesthood in secret and was ordained in 1946. First as a priest and then as the Archbishop of Krakow, he and millions of his compatriots suffered under Soviet occupation, which for decades caused despair and destruction.

In 1978, this beloved son of Poland made history by becoming Pope John Paul II, the first non-Italian pontiff in more than four hundred years. Less than a year later, the new Pope embarked on a nine-day visit to his homeland that would change the course of history.

Millions of Poles, almost one-third of the nation, turned out to see the Holy Father in Warsaw on June 2, 1979, while the rest of the country and the world followed his trip on television and radio. On the first day of his pilgrimage, Pope John Paul II declared, “There can be no just Europe without the independence of Poland marked on its map!” His cry for freedom was a source of strength to millions throughout the world.

Inspired by the Pope’s example and meeting him in Vatican City in 1982, President Ronald Reagan found in John Paul II a cherished ally in the fight for freedom.

Throughout his 26-year pontificate, Saint John Paul II worked tirelessly to defend liberty and to promote human dignity. He was the most widely traveled Pope in history, visiting 129 countries.

He was the first pope to visit the White House in 1979, and made seven apostolic visits to the United States. In June 2004, President George W. Bush presented him with our nation’s highest civilian honor, the Presidential Medal of Freedom.

On April 27, 2014, Pope John Paul II was canonized, along with Pope John XXIII, marking an extraordinary moment in the Catholic Church. Newt and I had the honor of being present in St. Peter’s Square for this historic occasion.

As we celebrate the life and legacy of Saint John Paul II, may we continue to be inspired and strengthened by his example.