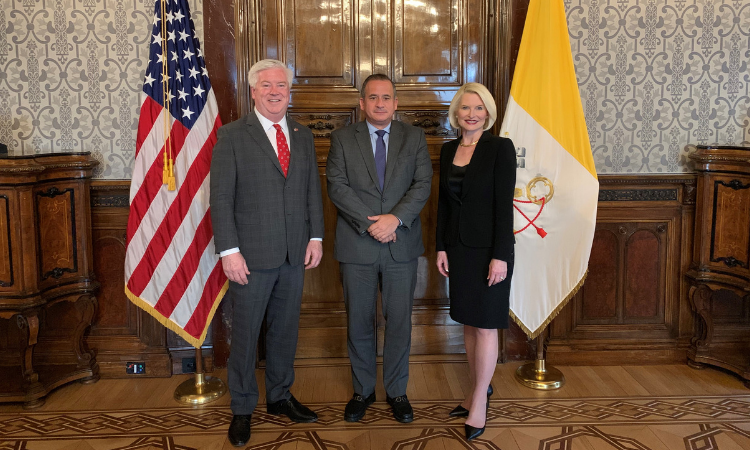 Today I had the honor to welcome Francisco Sucre, President of the Permanent Commission of Foreign Policy, Sovereignty, and Integration of the National Assembly of Venezuela, to the United States Embassy to the Holy See. I reaffirmed America’s ironclad support for interim President Juan Guaidó, the democratically elected National Assembly, and the people of Venezuela as they restore constitutional order and democracy to their country.

To date, more than 50 countries have joined in supporting interim President Guaidó. The United States hopes that others in the international community will stand up for the rule of law and support the leader whom the Venezuelan people have affirmed as their legitimate interim President.

In response to the dire humanitarian crisis caused by former President Nicolas Maduro’s economic mismanagement, corruption, and violent oppression, the United States is providing emergency assistance in response to Interim President Guaidó’s request for aid.  The United States has provided more than $145 million in humanitarian assistance to the people of Venezuela and will be mobilizing additional life-saving aid.

I was also pleased that Ambassador George Glass, U.S. Ambassador to Portugal, was able to join today’s meeting. Together we expressed to Mr. Sucre America’s unwavering support for interim President Juan Guaidó as he establishes a transitional government and carries out his duties as the only legitimate leader of Venezuela.