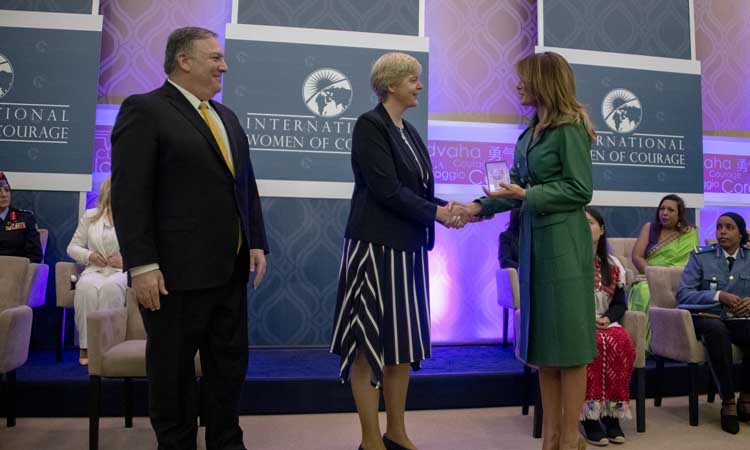 U.S. Secretary of State Michael R. Pompeo and First Lady of the United States Melania Trump present Sister Orla Treacy, Ireland (nominated by the U.S. Embassy to the Holy See) with the 2019 International Women of Courage (IWOC) Award during the ceremony at the U.S. Department of State in Washington,

Now in its 13th year, the Secretary of State’s International Women of Courage (IWOC) Award recognizes women around the globe who have demonstrated exceptional courage and leadership in advocating for peace, justice, human rights, gender equality, and women’s empowerment, often at great personal risk and sacrifice.  Since the inception of this award in March 2007, the State Department has recognized over 120 women from more than 65 different countries.  This year, the U.S. Embassy to the Holy See successfully nominated Sister Orla Treacy of Ireland.

A member of the congregation of the Institute of the Blessed Virgin Mary, known as the Loreto Sisters, Sister Orla serves as the head administrator of the Loreto Rumbek Mission in South Sudan, overseeing a boarding secondary school for girls, a co-educational primary school, and a women and child-centric primary healthcare facility.

At a ceremony on March 7 in Washington D.C., Secretary of State Pompeo and First Lady of the United States Melania Trump recognized Sister Orla and nine other inspiring women as 2019 International Women of Courage.

“Sister Orla, like so many extraordinary religious sisters working on the frontlines of conflict, embodies the finest qualities of an international woman of courage,” said Callista Gingrich, U.S. ambassador to the Holy See. “It was an honor to nominate her for this prestigious award and join her in Washington for the ceremony.”

Sister Orla is a part of a diverse multinational team of religious sisters, educators, nurses, and other support staff, who all share a vision for improving the lives of the most vulnerable in the community. Despite the devastating consequences of war in Rumbek, and the many barriers to women and girls in the community, Sister Orla remains filled with hope, and the Loreto Schools stand as a beacon of light for future South Sudanese generations.