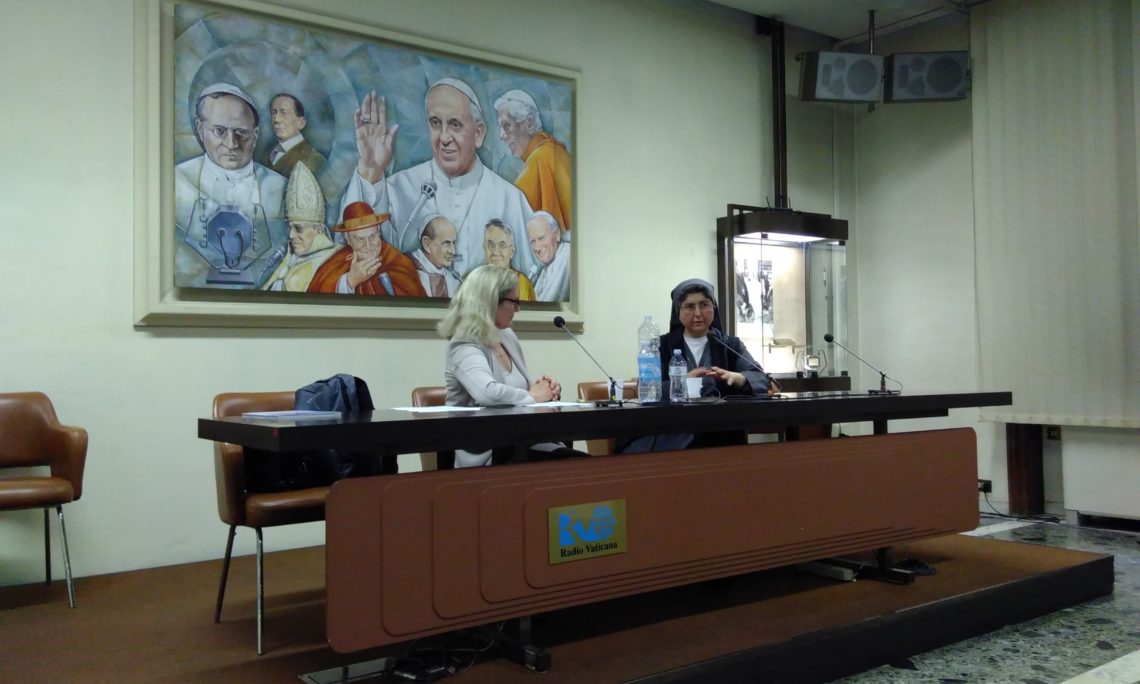 While in Rome, Sister Carol Tahhan, recipient of the 2017 International Woman of Courage Award, had the opportunity to meet with Embassy officials, Vatican press, and attend a papal audience and meet Pope Francis. Additionally, she was present at several meetings with religious leaders and organizations including the International Union of Superiors General (UISG), and the Vatican Women’s Association (D.VA).

On the morning of April 11, Sr. Carol, who belongs to the congregation of Daughters of Mary Help of Christians (Salesians), attended an event in her honor at the UISG Headquarters where she spoke about her mission in Damascus working particularly with women and young children. Sr. Carol shared the challenges of her mission in war-torn Syria: “There are no safe places in Syria,” and “Every day, we walk in the streets and death walks right beside us.” She acknowledged the importance of courage and faith in God to persevere, “I cannot be afraid. The Church must offer hope and enthusiasm.”  Despite Sr. Carol’s many hardships, and the difficulties faced by all women religious, the discussion emphasized a message of hope, as Sr. Carol called for all women in attendance to work together for peace, “Let us all be peace-makers, because peace is possible.”

Later that afternoon, Sr. Carol was invited to a meeting at Vatican Radio, hosted by Donne in Vaticano (Women in the Vatican), in short D.VA. This association of women working at the Vatican was created in September 2016, and Sr. Carol was happy to accept their invitation to speak. Interviewed by D.VA’s president, Tracey McClure, Sr. Carol captured the audience talking about the many difficulties of working in Syria, and the impact the work of the Sisters is having in the city. At the nursery she directs, only 24 of the 200 children are Christian, the rest are Muslim. Religious affiliation matters very little to Sr. Carol; in her words: “our home is always open to all.” She also shared about the tailoring workshop she started for Syrians and Iraqi refugee women. Through the program, the women who enroll receive a sewing machine upon graduating so they can begin to support themselves with their own through trade. During the interview, Sr. Carol shared what happened at a recent graduation ceremony: Upon receiving her diploma, one refugee woman approached Sister Carol, crying, telling her that, “this was the first time I have gotten a diploma in my life.”