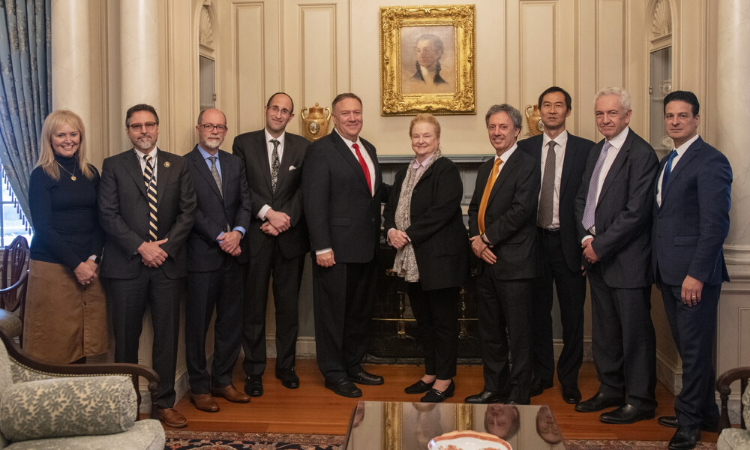 (Photo: US Department of State)

I first want to thank Dr. Peter Berkowitz and my friend and mentor, Ambassador Mary Ann Glendon, for their leadership of the Commission, and all their hard work. You’ll hear from both of them in a moment.

I’m also grateful to the members of the Commission for taking on this important task, for examining what unalienable rights really are, and what they mean for us today.

And I’m exceedingly thankful to the members of the public in attendance. The health of a democracy depends on the care and concern of the demos – the people. You’re taking it seriously.

It’s in the best traditions of American democracy that this meeting is a public one. One thing that makes America special is that our civic deliberations take place openly. We are not governed by the private writ of kings. We always have the debate – think of the Lincoln-Douglas debates, President Wilson’s 14 Points, the civil rights movement, and many other issues.

It heartens me that you all are here to consider the ideas and arguments made before you. I pray they will improve our understanding and profit our nation.

This meeting of the Commission extends America’s unmatched national commitment to fundamental human rights. It began with the words of the Declaration of Independence, which made clear governments must honor “unalienable rights.” It continued when Abraham Lincoln – inspired by the words of the Declaration – signed the Emancipation Proclamation. In 1947, Eleanor Roosevelt led the creation of the UN Declaration of Universal Human Rights – a document that substantially drew on our Constitution’s Bill of Rights. We upheld fundamental rights in the civil rights era, when the promise of liberty and equality was realized for Americans who had previously been treated as second-class citizens, or worse. And we upheld human rights internationally in the fight against apartheid, and communism.

But in the last few decades, we’ve become confused about “rights.” Claims of “rights” have shaped our political debates, but it isn’t always clear whether we’re talking about fundamental, universal rights; or debatable political priorities; or merely personal preferences.

Claims of “rights” have exploded. One research group has found that between the United Nations and the Council of Europe, there are a combined 64 human rights-related agreements, encompassing 1,377 provisions.

International bodies designated to protect human rights have drifted from their missions, or have been outright corrupted. Authoritarian governments often misuse these bodies. Just last week, China and Russia, for instance, voted Venezuela onto the UN Human Rights Council.  What hypocrisy.

And our kids aren’t taught about the role of “unalienable rights” in the American Founding – if they learn about the Founding at all. Perhaps Professor McClay will have something to say about that.

So it’s time to ask some key questions:

These are the types of questions the Commission will explore.

I expect the Commission’s distinguished members will produce worthy answers. I want to be clear that the Commission is an advisory body. Its focus is on principle, not policy formulation ‒ although we hope it will inform policy-making in the future. Its mission isn’t to discover new principles, but to ground our discussion of human rights in America’s founding principles. I would also note its work is nonpartisan – there are registered Republicans, Democrats, and Independents serving.

That composition reflects a consensus across American politics that fundamental human rights – human dignity – must be protected. It’s why the State Department has put out a Human Rights Report every year since 1977. It’s why we have an entire bureau dedicated to fighting human trafficking. It’s why both left and right are sounding the alarm on China’s abuse and detainment of Uighur Muslims in the Xinjiang region of China.

I am confident that the Commission will be a vital new voice in the American chorus of freedom. We hope it will prompt a serious debate about human rights that extends across party lines and national borders. And we trust that it will extend America’s legacy as a nation without peer in upholding freedom and human dignity.