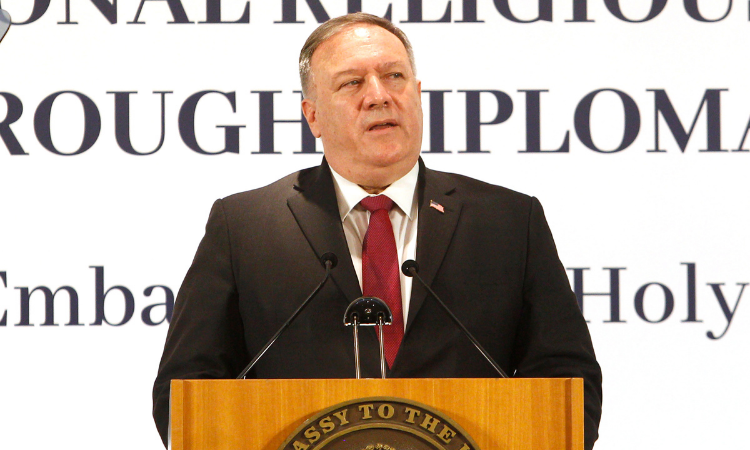 Thank you, Ambassador Gingrich, for that incredibly kind introduction.  You’ve done wonderful work with this important symposium.  I’m glad to be here for the second time.

To Your Eminence Cardinal Parolin, thank you for being here.

It’s great to see you again too, Archbishop Gallagher.

It’s wonderful to be with a lot of good friends, old friends.

I want to also welcome other members of the clergy, members of the diplomatic corps who are here as well, and all of the distinguished guests.  It’s an honor to be here.  It truly is.

I especially want to recognize many of the leaders of faith-based groups we have in the audience today.  You reflect the grace of God in serving others.  Thank you for what you do, and may God bless all of you.

And I’m humbled too by those of you here who have spent your entire lives in service of God in full-time pastoral ministry, makes my job look easy.

2020 marks the 75th anniversary of the end of World War II in Europe, an anniversary that I’ve reflected on quite a bit as I’ve traveled throughout Europe several times this year.

That life or death struggle was a crucible, a proving ground of moral witness.  Individual stories of valor were legion.  But I remember especially Father Bernhard Lichtenberg.

In 1938, in the aftermath of Kristallnacht, he began to speak up more loudly on their behalf, proclaiming at St. Hedwig’s Cathedral in Berlin, quote, “Outside the synagogue is burning, and that too, is a house of God.”

Father Lichtenberg didn’t stop with mere words.  From then on, he fearlessly prayed each day publicly for the Jews and other victims of Nazi brutality.

Eventually, the Nazis arrested him in 1941, October.  They offered that he could make a deal: He could go free in exchange for stopping his subversive preaching.  Instead, he asked to accompany deported Jews and Jewish Christians to Poland, so he could minister to them.

In May of 1942, some eight months later, he was given a two-year prison sentence.  When asked if he had anything to add when the sentence was read, he said, quote, “I submit that no harm results to the state by citizens who pray for the Jews.”

Towards the end of his sentence, the Nazis realized they could never break his spirit.  They ordered him sent to Dachau concentration camp, but he died on the way before he reached that grim destination.

Father Lichtenberg bore an incredible moral witness, and in 2004 he was honored by the State of Israel as one of the Righteous Among the Nations, a non-Jew who risked his life to save Jews from Nazis.

Today, as we think about that man, I urge all faith leaders to exhibit a similarly moral, bold witness for the sake of religious freedom, for human dignity, and for peace.

Now, many of you know when I was here last year, I spoke about religious freedom at length.

It was important for me to attend this year, because the mission of defending human dignity – and religious freedom in particular – remains at the core of American foreign policy.

That’s because it’s at the heart of the American experiment.  Our founders regarded religious freedom as an absolutely essential right of mankind and central to our founding.

Indeed, I would say it’s an integral part to what Pope John Paul II described as the “universal longing for freedom” at the United Nations when he spoke in 1995.  Billions of people today – as Ambassador Gingrich said, people have always seeked to worship according to their conscience.

But sadly, authoritarian regimes, terrorists, and even secularists, free societies are – in their different ways – trampling religious freedom all around the world.

Vast swathes of humanity live in countries where religious freedom is restricted, from places like Iran, to Nigeria, and to Cuba, and beyond.

The State Department spends ample resources at chronicling these horrific situations in an annual report that extends to the thousands of pages.

Nowhere, however – nowhere is religious freedom under assault more than it is inside of China today.  That’s because, as with all communist regimes, the Chinese Communist Party deems itself the ultimate moral authority.

An increasingly repressive CCP, frightened by its own lack of democratic legitimacy, works day and night to snuff out the lamp of freedom, especially religious freedom, on a horrifying scale.

I spoke on this topic last year for a bit, and I paid special attention last year to the Uyghur Muslims of Xinjiang.

But they’re not the only victims.  The Chinese Communist Party has battered every religious community in China: Protestant house churches, Tibetan Buddhists, Falun Gong devotees, and more.

Nor, of course, have Catholics been spared this wave of repression:

Catholic churches and shrines have been desecrated and destroyed.

Catholic bishops like Augustine Cui Tai have been imprisoned, as have priests in Italy.[1]

And Catholic lay leaders in the human rights movement, not least in Hong Kong, have been arrested.

Authorities order residents to replace pictures of Jesus with those of Chairman Mao and those of General Secretary Xi Jinping.

All of these believers are the heirs of those Pope John Paul celebrated in his speech to the UN, those who had “taken the risk of freedom, asking to be given a place in social, political, and economic life which is commensurate with their dignity as free human beings.”

We must support those demanding freedoms in our time, like Father Lichtenberg did.

Now, the United States can and does play its part in speaking up for those oppressed, although we too can do more.  But we work hard to shine the light on abuses, punish those responsible, and encourage others to join us in this advocacy.

But for all that nation-states can do, ultimately, our efforts are constrained by the realities of world politics.  Countries must sometimes make compromises to advance good ends, leaders come and go, and indeed priorities change.

The Church is in a different position.  Earthly considerations shouldn’t discourage principled stances based on eternal truths.  And as history shows, Catholics have often deployed their principles in glorious, glorious service of human dignity.

The French Catholic philosopher Jacques Maritain helped lay the intellectual foundation for the Universal Declaration of Human Rights in 1948.

In the wake of the Second Vatican Council in the 1960s, the bishops of Poland and West Germany led the way towards reconciliation between their countries.

And every serious scholar of the Cold War now acknowledges that Pope John Paul II played a pivotal role in igniting the revolution of conscience that brought down the Iron Curtain.

Pope Emeritus Benedict described religious freedom as “an essential element of a constitutional state,” and indeed, “the litmus test for the respect of all human rights.”

And just like Pope Benedict, Pope Francis has spoken eloquently about the “human ecology” essential to decent societies.

And in my own country, movements to end slavery in the 19th century and expand civil rights for African Americans in the 20th century were largely led by Christians of many denominations who appealed to our nation’s Judeo-Christian heritage, as well to our core founding principles.

These examples, these remarkable examples of Christian action for freedom, justice, and human dignity shame those who are trying to drive faith from the public square.

But even more importantly, they should inspire us today, and especially those of you who hold spiritual authority of any faith, to lead in our own time.

Pope Francis has exhorted the Church to be “permanently in a state of mission.”  It’s a hope that resonates with this evangelical Protestant who believes, as the Holy Father does, that those of us given the gift of Christian faith have an obligation to do our best to bless others.

A Church permanently in opposition to tyrannical regimes.

A Church permanently engaged in support of those who wish to take “the risk of freedom” of which Pope John Paul II spoke, especially, most especially where religious freedom is denied, or limited, or even crushed.

As Christians, we all know we live in a fallen world.  That means that those who have responsibility for the common good must sometimes deal with wicked men and indeed with wicked regimes.  But in doing so – in doing so, statesmen representing democracies must never lose sight of the moral truths and human dignity that make democracy itself possible.

And this call to witness extends to all faiths, not just to Christians and Catholics.  It’s for leaders of all faiths at – indeed, at every level.

It’s my fervent hope that Muslim leaders will speak up for the Uyghurs and other oppressed Muslims in China, including ethnic Kazakhs and the Krygyz.

Jewish leaders, too, must stand up for the dwindling Jewish community in Yemen.

Christian leaders have an obligation to speak up for their brothers and sisters in Iraq, in North Korea, and in Cuba.

I call on every faith leader to find the courage to confront religious persecution against their own communities, as well as Father Lichtenberg did against members of other faiths as well.

At the time, he said the following:  He said that “the Church intends merely to recognize that those martyrs are an example of courage and consistency to us all, and that they honor the noble Chinese people.”

Brave men and women all over the world, taking that “risk of freedom,” continue to fight for respect for their right to worship, because their conscience demands it.

Pope John Paul II bore witness to his flock’s suffering, and he challenged tyranny.  By doing so, he demonstrated how the Holy See can move our world in a more humane direction, like almost no other institution.

And may God bless each and every one of you who are here today.