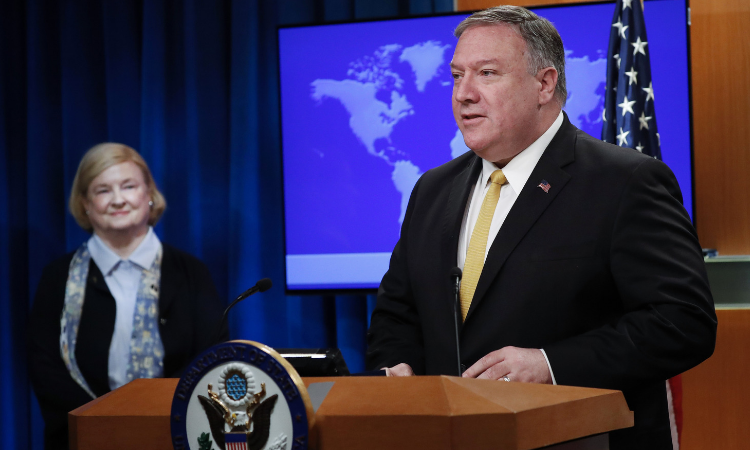 Secretary of State Mike Pompeo, right, unveils the creation of Commission on Unalienable Rights, headed by Mary Ann Glendon, left, a Harvard Law School professor and a former U.S. Ambassador to the Holy See, during an announcement at the US State Department in Washington, Monday, July 8, 2019. (AP P

On Monday, July 8, Secretary of State Mike Pompeo announced the creation of a new Commission on Unalienable Rights to examine the role of human rights in U.S. foreign policy.  The group is composed of human rights experts, philosophers, activists, and lawmakers from both sides of the aisle, and will be chaired by Harvard Law Professor Mary Ann Glendon, a former U.S. ambassador to the Holy See.

SECRETARY POMPEO: Good morning, everyone. In my address at the Claremont Institute back in May, called “A Foreign Policy from the Founding,” I made clear that the Trump administration has embarked on a foreign policy that takes seriously the founders’ ideas of individual liberty and constitutional government. Those principles have long played a prominent role in our country’s foreign policy, and rightly so. But as that great admirer of the American experiment Alex de Tocqueville noted, democracies have a tendency to lose sight of the big picture in the hurly-burly of everyday affairs. Every once in a while, we need to step back and reflect seriously on where we are, where we’ve been, and whether we’re headed in the right direction, and that’s why I’m pleased to announce today the formation of a Commission on Unalienable Rights.

The commission is composed of human rights experts, philosophers, and activists, Republicans, Democrats, and Independents of varied background and beliefs, who will provide me with advice on human rights grounded in our nation’s founding principles and the principles of the 1948 Universal Declaration of Human Rights. An American commitment to uphold human rights played a major role in transforming the moral landscape of the international relations after World War II, something all Americans can rightly be proud of. Under the leadership of Eleanor Roosevelt, the 1948 Universal Declaration on Human Rights ended forever the notion that nations could abuse their citizens without attracting notice or repercussions.

With the indispensable support of President Ronald Reagan, a human rights revolution toppled the totalitarian regimes of the former Soviet Union. Today the language of human rights has become the common vernacular for discussions of human freedom and dignity all around the world, and these are truly great achievements.

But we should never lose sight of the warnings of Vaclav Havel, a hero of the late-20th-century human rights movement, that words like “rights” can be used for good or evil; “they can be rays of light in a realm of darkness … [but] they can also be lethal arrows.” And as Rabbi Jonathan Sacks has observed, the evils of any time and place will be justified in whatever is the dominant discourse of that time and of that place. We must, therefore, be vigilant that human rights discourse not be corrupted or hijacked or used for dubious or malignant purposes.

It’s a sad commentary on our times that more than 70 years after the Universal Declaration of Human Rights, gross violations continue throughout the world, sometimes even in the name of human rights. International institutions designed and built to protect human rights have drifted from their original mission. As human rights claims have proliferated, some claims have come into tension with one another, provoking questions and clashes about which rights are entitled to gain respect. Nation-states and international institutions remain confused about their respective responsibilities concerning human rights.

With that as background and with all of this in mind, the time is right for an informed review of the role of human rights in American foreign policy. And I’m pleased to introduce to you today the chair of the commission, Professor Mary Ann Glendon, the Learned Hand Professor of Law at Harvard Law School. Mary Ann is a world-renowned author, beloved professor, an expert in the field of human rights, comparative law, and political theory. She’s the perfect person to chair this effort.

These individuals will provide the intellectual grist for what I hope will be one of the most profound reexaminations of the unalienable rights in the world since the 1948 Universal Declaration. Our own Kiron Skinner will serve as the head of the executive secretary of the committee, and Cartright Weiland will serve as Rapporteur.

I hope that the commission will revisit the most basic of questions: What does it mean to say or claim that something is, in fact, a human right? How do we know or how do we determine whether that claim that this or that is a human right, is it true, and therefore, ought it to be honored? How can there be human rights, rights we possess not as privileges we are granted or even earn, but simply by virtue of our humanity belong to us? Is it, in fact, true, as our Declaration of Independence asserts, that as human beings, we – all of us, every member of our human family – are endowed by our creator with certain unalienable rights?

Each of these is an important question, and the mission of the commission is to provide advice on them and others not as purely abstract academic matters, but in a manner deeply informed by the timeless truths embedded in the American founding with a view to guiding our nation’s foreign policy. Or to put it another way, the commission’s charge is to point the way toward that more perfect fidelity to our nation’s founding principles to which President Lincoln called us at Gettysburg and to which Dr. King called us while standing in front of the Lincoln Memorial on the mall in Washington, D.C., not so very far from where we are here today.

Thank you. With that, I’d like to introduce Professor Mary Ann Glendon to say a few words.

PROFESSOR GLENDON: Mr. Secretary, I am deeply grateful for the honor of chairing this new commission, and I wanted to thank you especially for giving a priority to human rights at this moment when basic human rights are being misunderstood by many, manipulated by many, and ignored by the world’s worst human rights violators. At the same time, I understand that the mission that you have set us is a challenging one. You’ve asked us to work at the level of principle, not policy, and you’ve asked us to take our bearings from the distinctive rights tradition of the United States of America, a tradition that is grounded in the institutions without which rights would not be possible: constitutional government and the rule of law. I want to assure you, Mr. Secretary, that we will do our very best to carry out your marching orders and to do so in a way that will assist you in your difficult task of transmuting principle into policy. Thank you very much.