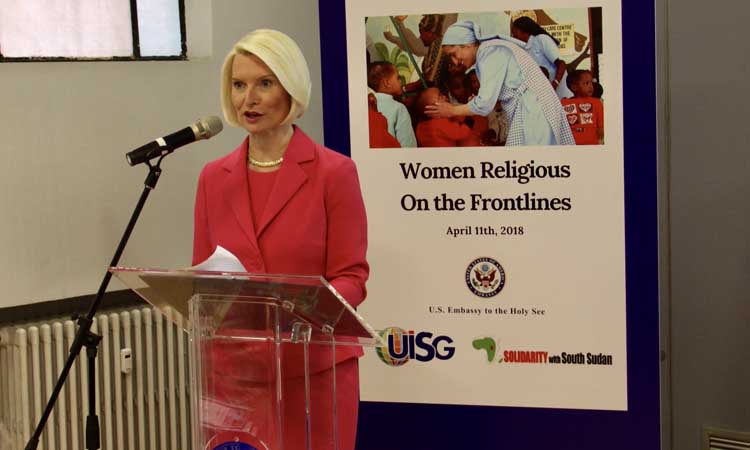 Good morning.  I am pleased to welcome you as we recognize the extraordinary contributions of Women religious on the frontlines.

I am especially grateful to Sister Patricia Murray and her dedicated staff at the UISG for co-hosting this symposium.  The United States Embassy to the Holy See has been a longtime friend and supporter of the UISG and its work.

I’d also like to thank Sister Yudith Pereira Rico and Solidarity with South Sudan for collaborating with us today.  We appreciate your dedication to the tireless pursuit of peace.

And finally, I’m honored that we’ll be joined by His Excellency, Archbishop Paul Gallagher, the Vatican’s Secretary for Relations with States.

We are here today to recognize and celebrate women religious – often the unsung heroes of the Catholic Church.

Women religious are the last beacon of hope for millions of people suffering from famine, disease, and conflict.

They serve the displaced and the desperate, frequently at the risk of personal harm.

They work in countries like South Sudan and Syria, where governments have failed and humanitarian organizations struggle to operate.

They also play a critical role in the global fight against human trafficking – a cause close to my heart.

When I recently visited the Ursuline sisters in Caserta at Casa Rut, I saw firsthand how women religious provide support and dignity to victims of human trafficking.

Over 400 survivors of this horrific crime, including Blessing Okeidon, one of our distinguished panelists here today, have found refuge at Casa Rut.

Too often, the work of women religious is under appreciated and unnoticed.  It is my hope that this symposium will illustrate the remarkable contributions women religious make to advance peace and human rights around the world.

I am honored that we are joined today by Sister Maria Elena Berini.  For over four decades,

Sister Berini has served in war-torn communities in Africa – first in Chad and now in the Central African Republic.

For the last ten years, Sister Berini has performed astonishing acts of charity from her mission in Bocaranga, demonstrating courage, grace, and compassion.

When armed militants entered her mission in 2014, she told them: “I am here. Kill me. I am not afraid.”  As the group ransacked the mission, Sister Berini sent the youngest sisters and villagers into the hills and stayed behind to help a woman give birth.

Sister Berini’s incredible devotion to human dignity is born simply out of her faithful desire to serve.  Her cause is peace and her devotion is unconditional.

Sister Berini is one of the many inspiring women religious – in this room and around the world – who work tirelessly to advance human dignity and freedom.

Women religious are the educators, entrepreneurs, and humanitarians on the frontlines.  Their service and sacrifice should be emulated and celebrated.

The United States Embassy to the Holy See will continue to shine a bright light on women religious and their extraordinary achievements.