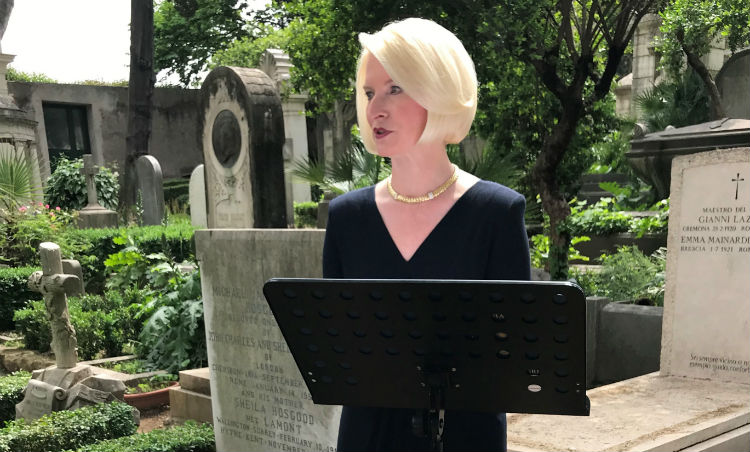 Good morning.  I’d like to thank the Pax Romana Chapter of the Daughters of the American Revolution for the opportunity to be with you today.

I know that one of my predecessors, Ambassador Shakespeare, attended a similar ceremony in 1988 – the last time this grave site was restored.

In 1848 Jacob Martin was appointed by President Polk to serve as our nation’s first Chargé d’Affaires to the Papal States.  Sadly he passed away just days after presenting his credentials to Pope Pius IX.

At that time, the United States was reeling from the aftermath of the Mexican-American war, and still trying to determine its place in the world.

Today, America stands as a beacon of hope and freedom, in no small part due to the sacrifices made by countless brave Americans, from Bunker Hill and Concord to Normandy and Anzio.

So it’s a great honor and privilege for me to be here in the presence of the Daughters of the American Revolution, whose ancestors fought in our war for independence from Great Britain.

I was impressed to learn that your chapter actively works to find and mark DAR graves in Italy, while also restoring the graves of other Americans.  I commend you for your support of U.S. military cemeteries; your work on Italian earthquake relief; and your efforts to assist underprivileged children in Rome.

As we honor the memory of Jacob Martin, we are reminded of our nation’s longstanding relationship with the Vatican – one that spans centuries.

And while the challenges we face today and the objectives we prioritize are different than they were in 1848, our relationship with the Holy See centers on an enduring theme, best explained by President Reagan:

“As a people and as a government, we seek to pursue the same goals of peace, freedom, and humanity… that the Church pursues in its spiritual role.”

The influence of the Holy See extends to over 1.3 billion Catholics worldwide and to millions of non-Catholics as well.  Today, 183 countries have diplomatic relations with the Holy See – only the United States has a larger diplomatic presence in the world.

This global influence allows the Catholic Church to gather information and deliver messages in places traditional governments cannot reach.  Working closely with the Holy See, our embassy serves as a global engagement post to promote peace, freedom, and human dignity.

Although Chargé d’Affaires Martin’s tenure was cut short, his memory serves as reminder of the long-standing alliance between the United States and the Holy See – an alliance that remains strong today.