Home Home | News & Events | Remarks by U.S. Ambassador to the Holy See Callista L. Gingrich at the “Life Across the Occupation Line in Georgia” Exhibition 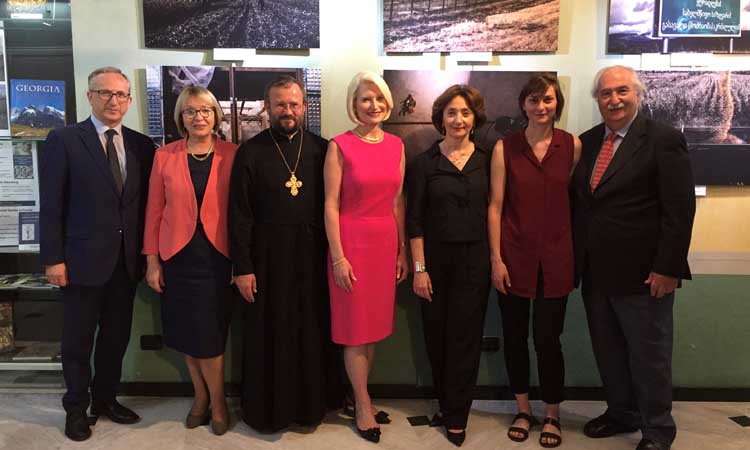 As Prepared For Delivery

Thank you.  It is a pleasure to be with you as we open this important photo exhibition.

Georgia and the United States have shared a special bond of friendship for more than a quarter century, based on common values and shared interests.  The United States, under the leadership of President Trump, steadfastly supports Georgia’s sovereignty and territorial integrity.

This summer marks the tenth anniversary of NATO’s Bucharest declaration that Georgia will become a member of NATO.  Year after year, Georgia has made valuable contributions to the Alliance, and as part of the NATO Response Force.  On a per capita basis, Georgia has contributed more troops to Afghanistan than any other country.

NATO depends upon capable and resilient partners like Georgia to safeguard our shared security interests around the world.  Secretary Pompeo underscored our support of Georgia on its path to NATO and the European Union during the recent NATO Foreign Ministerial in Brussels.  I am delighted to reaffirm our support this evening.

This summer marks another, unwelcome anniversary.  Ten years ago, Russia invaded Georgia.  The United States unequivocally condemns Russia’s illegal occupation of Georgian soil.  The photos we see in this remarkable exhibition capture the brutality of that invasion.

The United States further condemns the Russia-backed Syrian regime’s intention to establish diplomatic relations with the Russian-occupied regions of Abkhazia and South Ossetia.  These territories are, and always will be, Georgia.

2008 ceasefire agreement to withdraw its forces to pre-conflict positions, to drop its recognition of the Georgian regions of Abkhazia and South Ossetia as independent states, and to provide free access for humanitarian assistance to those regions.

We commend and support the Georgian government’s efforts to protect itself from illegal Russian aggression.  Your peace initiative to engage citizens in Abkhazia and South Ossetia will help strengthen communication and dialogue, leading to a more unified Georgian future.

The destabilizing activities of the Russian Federation and its proxies will not go unanswered.

As President Trump has made clear, we want to have a constructive relationship with Russia.

But until President Putin’s government chooses peace, we will continue to defend the values of freedom and respect for international norms.

Countering Russia’s malign influence requires Western unity.  There is no country more aware of the Russian threat and the need for a long-term strategy to counter it than Georgia.

As Vice President Pence said during his visit to Georgia last July, “We are with you.  We stand with you.  We are proud of our friendship and strategic partnership with the nation and the people of Georgia.”

Beyond our undivided security partnership, our two countries share a common belief in democracy and the rule of law.  Georgia is a powerful symbol of freedom and stands as a bulwark against efforts to erode Western values.

May God bless Georgia and the United States of America.  Thank you.