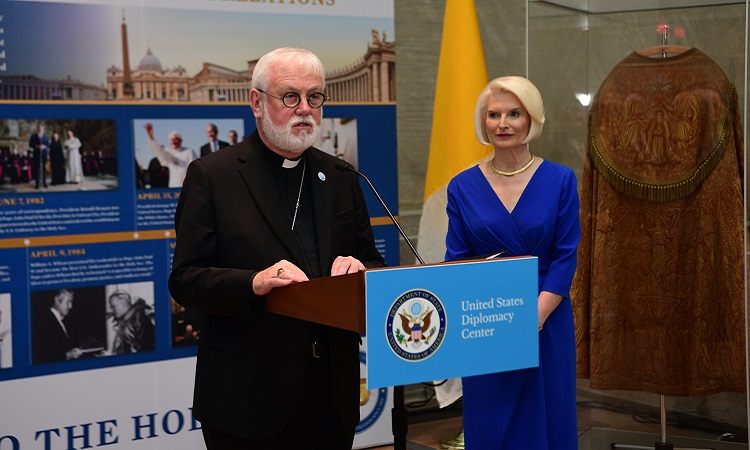 As Delivered by Archbishop Paul Gallagher, Holy See Secretary for Relations with States:

The history of the relations between the Holy See and the United States of America goes back for more than two centuries. We cherish the long tradition of friendship and mutually beneficial cooperation that we have enjoyed.

At the very beginning of the institutional establishment of the United States of America, President George Washington assured Pope Pius VI, in 1788, that the Pope would have no need of permission from the United States’ Government for the appointment of bishops. Shortly thereafter, the Most Reverend John Carroll was appointed the first Bishop of Baltimore on November 6, 1789. This initial exchange between the two governments was important as it clearly and happily affirmed the principle of libertas ecclesiae, affirming the autonomy of the Church in her internal governance.

From 1797 to 1867, the United States maintained consular relations with the Papal States. Diplomatic relations existed with the Pope, from 1848 under President James K. Polk to 1867 under President Andrew Johnson, though not at ambassadorial level. These relations lapsed when on February 28, 1867 Congress passed legislation that prohibited any future funding to United States diplomatic missions to the Holy See. This decision was taken within the context of mounting anti-Catholic sentiment in the United States.

Even though there were no formal diplomatic relations between the Holy See and the USA from 1867 to 1984, some Presidents (since the time of President Franklin D. Roosevelt) have sent personal representatives to the Holy See for discussions of international, humanitarian and political issues. Many Presidents of the USA (Eisenhower, Kennedy, Johnson, Nixon, Ford, Carter, Reagan) have visited the Pope in the Vatican.

Under the leadership of Pope Saint John Paul II and President Ronald Reagan, collaboration between the Holy See and the United States of America was further strengthened. The visit of President Reagan to the Vatican on 7th June 1982 was an important moment. The two leaders shared their common concerns and manifested their strong will to work together, among others, to protect human dignity. Saint John Paul II rightly emphasized that “anything that wounds, weakens or dishonours human dignity, in any aspect, imperils the cause of the human person and, at the same time, the peace of the world”.

As an example of the strong connection that our two States share, I wish to mention a few recent events: in September 2015 there was the memorable visit of Pope Francis to the USA and then on May 24, 2017, President Donald Trump made a visit to the Vatican.  Moreover, in June 2015, the United States and the Holy See concluded their first inter-governmental agreement aimed at curtailing offshore tax evasion through an automatic exchange of tax information.

At the Secretariat of State, we regularly have meetings with high-level government officials, Senators and Representatives. We thus have good opportunities to exchange views, build strong relations and engage in practical cooperation.

The Apostolic Nunciature in Washington has regular contacts and pursues dialogue with the US administration, just as the American Embassy to the Holy See does with the various offices of the Roman Curia.

This is an appropriate occasion to commend Her Excellency Callista Gingrich and the staff of the US Embassy to the Holy See for their commitment and for the many well-organized initiatives to promote religious freedom and to encourage women religious commitment against trafficking in persons, to mention but a few. For the celebration of the 35th Anniversary of the Diplomatic Relations between the Holy See and the United States of America, Ambassador Gingrich has been promoting many important activities: a Holy Mass at the Basilica of Saint Paul Outside-the-Walls; the 35th Anniversary Concert in Rome by the Choir of the Basilica of the National Shrine from Washington, DC; the gift of the Statue of Mary, Mater Ecclesiae, installed in the Vatican Gardens; as well as today’s exhibition and a Symposium that will be held in Rome, on October 2, 2019.

Allow me to also extend my gratitude to the Apostolic Nuncio to the United States of America, Archbishop Christophe Pierre, to his collaborators and to the Catholic Church in the USA for their commitment to advancing and promoting human dignity and social justice. I also wish to thank the Knights of Columbus, who are always most generous and dedicated in their support of the Catholic Church, for sponsoring this celebration. Thank you very much.

I am confident that the good diplomatic relations between the Holy See and the United States of America will continue to strengthen, as we share common views on a variety of issues. As Pope Francis emphasized on the occasion of his Apostolic visit to the United States in September 2015, the aim of our collaboration is to build a society which is truly tolerant and inclusive, to safeguarding the rights of individuals and communities, to build a just and wisely ordered society which respects the right to religious liberty. The protection and promotion of that fundamental human freedom remains one of America’s most precious values. And we are all called to be vigilant in preserving and defending that freedom from everything that would threaten or compromise it (Cf. Pope Francis, Washington, 23 September 2015). We also collaborate in efforts to build peace, to reduce poverty, to fight human trafficking and other contemporary forms of slavery, and we share a common concern for religious minorities, especially in the Middle East.