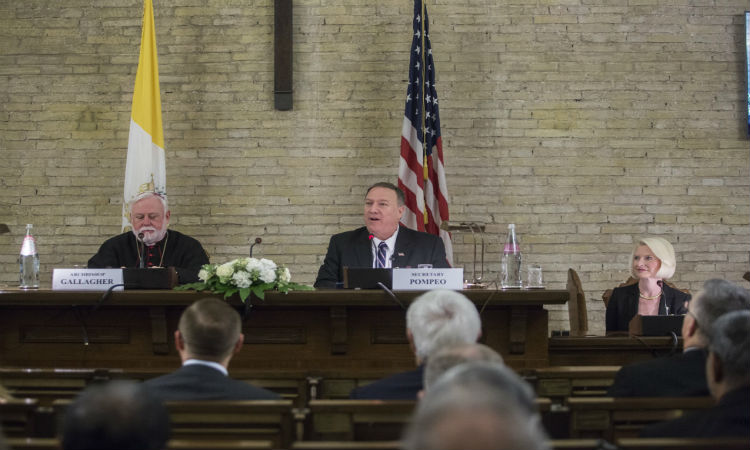 Archbishop Gallagher, it’s great to be with you again. You brought the lamp over just a little bit closer. You always bring a little more light into my world. So thank you. Thank you for that.

Your Excellencies, members of the clergy, and ladies and gentlemen, it’s my great honor to be here today to truly mark an amazing 35 years of diplomatic relations between the United States and the Holy See.

I also want to welcome the many members of faith-based organizations here today. You are truly Good Samaritans to the world.

And it is an incredible blessing to be here in this very special place, this magnificent Old Synod Hall.

And what an important subject we’re here today to discuss: human dignity, and how we can – and indeed, how we must – cooperate to promote it.

A story. Last week in New York City, in a packed conference room in the Palace Hotel, three ethnic Uighurs took the stage at an event organized by the United States Department of State. One of them was a woman named Zumrat Dawat.

In April of last year, Mrs. Dawat – a 30-something, mother of three – was summoned to the local police station in Xinjiang, China. She was shackled, interrogated, and taken to an internment camp, where she was forced to recite Chinese propaganda and beaten for giving an ailing fellow prisoner her food. She was injected with unknown drugs.

All of this for the crime of being Muslim. For worshipping her God. For exercising her conscience.

Her husband managed to advocate for her release. Before she left the camp, she was forced to renounce her faith and promise not to speak about what had happened to her. Chinese officials monitored her family and forced them to eat pork.

But Mrs. Dawat was one of the lucky ones. She made it to the United States. In front of that crowd in New York City, she cried while recounting her torture.

But she wasn’t alone. God was with her. And America was with her, too. It’s what we do, and it’s who we are.

Indeed, more than 30 nations attended that gathering. Canada, Germany, the Netherlands, and the United Kingdom co-sponsored the event. The Washington Post that day told Mrs. Dawat’s story in print.

Nations are paying attention to the sweeping violations of human rights and human dignity in Xinjiang now. They are standing up and speaking honestly about it. They’re following the wisdom of Jesus: “Be not afraid.”

This growing solidarity gives us hope of strength in numbers. Countries of the world can rally together to promote religious freedom and human dignity.

We’ve done it before, fortified by God’s grace.

Then-Pope – now Saint – John Paul II and President Ronald Reagan combined the moral authority of the Holy See with the prosperity and example of the United States, the freest nation on earth, to fight the evil empire. Through patience and unity of purpose, they prevailed.

Their words and deeds helped save – helped leave the Soviet leviathan on that ash heap of history.

Think of the millions of believers who can live with dignity and purpose, who can now worship without fear, thanks to the joint efforts of a pope and a president.

What a blessing to the world.

Today each of us must gird ourselves for another battle in defense of human dignity and religious freedom. The stakes today are arguably higher than they were even during the Cold War, because the threats to it are more diverse and more numerous.

More than 80 percent of mankind lives in places where religious freedom is threatened or entirely denied. Approximately 71 million people around the world are displaced as refugees. Roughly 25 million people are caught in human trafficking situations.

And it’s no coincidence that it has happened as unfree societies have proliferated.

Because when the state rules absolutely, God becomes an absolute threat to authority. That’s why Cuba cancelled National Catholic Youth Day back in August.

When the state rules absolutely, human dignity is trampled, not cherished. That’s why Assad kills his own people, and has no regard for the 11 million Syrians suffering today as displaced persons and refugees.

When the state rules absolutely, moral norms are crushed completely. That’s why the Islamic Republic of Iran has jailed, tortured, and killed thousands of its own citizens for four decades. It’s why China has put more than a million Uighur Muslims – Muslims like Mrs. Dawat – in internment camps. It’s why it throws Christian pastors in jail.

Freedom of religion can also be threatened when an intolerant majority rules. That’s how the Burmese security forces have been able to drive hundreds of thousands of Rohingya Muslims out of their homes, in the most violent and brutal ways.

We must recognize the roots of religious repression. Authoritarian regimes and autocrats will never accept a power higher than their own. And that causes all sorts of assaults on human dignity.

We must exercise our moral voice to confront them.

The Holy See and the United States have had our differences over the years. Good people can disagree.

But on the issues most fundamental, on the issues of human dignity and religious freedom, these issues that transcend everyday politics, on the enduring struggle of the individual’s right to believe and worship, we must – and I know we will – march together.

His Holiness leads a church that has carried on the mission of Christ for centuries. Sister Gabriella Bottani – who is with us today – leads more than 2,000 nuns around the world who fight human trafficking.

Catholic Relief Services helps students in areas of Iraq devastated by ISIS get back in school and recover a normal life. The voice of Catholics around the world, led by Pope Benedict, and Pope Francis, drew attention to the case of Asia Bibi in Pakistan, saving her – certainly saving her – from execution for her faith.

The United States came along just a little bit later than St. Peter, but protecting human dignity has long been essential to our foreign policy.

We led the creation of the Universal Declaration of Human Rights back in 1948.

After World War II, Pope Pius the Twelfth said after the war, quote, “Into the hands of America, God has placed the destinies of an afflicted mankind.” We used our power after World War II to rescue a starving Europe.

Today, we deploy humanitarian missions all over the world, such as the rescue efforts after the 2004 tsunami, or after the – in the aftermath of Hurricane Dorian just this past August.

And in the Trump administration, you have the strongest advocates of religious freedom in the history of our country.

The President and I have met with many victims of religious persecution. We’ve prioritized life in our foreign aid. We’ve devoted nearly $340 million to help Iraq’s ethnic and religious minorities recover from the scourge of ISIS.

We’ve used relentless diplomacy to secure the release of hostages like Pastor Andrew Brunson, and three men held in North Korea who I was proud to bring home last year.

Last week, President Trump became the first American president ever to host a religious freedom event at the United Nations.

But perhaps most importantly, at our Ministerial to Advance Religious Freedom this past July, we launched the International Religious Freedom Alliance, the first multilateral organization, multilateral body of its kind. We aim to make it the premier body in the world for advancing the issues of religious freedom.

We humbly ask the Holy See to join us. We ask the representatives of all nations present here today to join us. What could be more powerful than our voices all together, calling for the freedom to worship God?

In closing, I want to return to the story of Mrs. Dawat.

In her written testimony at the UN General Assembly, she stated that she was “tremendously grateful to the democratic countries of the world… for your deep concern for the plight of the Uighurs. I am asking all governments to save the suffering Uighur people.”

Our faith-based partners here today – each of you, all of you – have led not just as hearers of the word, but as doers, as the book of James urges us.

You are easing the suffering of many every day. Bless you for that.

I pray that the world will follow your lead, and set its hands to the vital work, the significance of which extends far beyond this life. 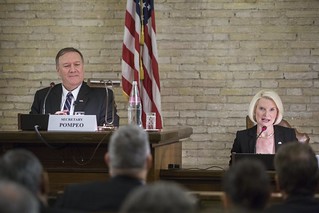