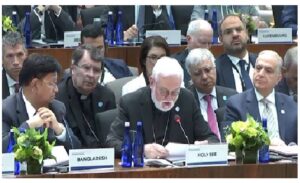 The Holy See is grateful for the invitation to take part in this second annual Ministerial to Advance Religious Freedom and I appreciate this opportunity to offer some brief remarks on the enjoyment of this most fundamental and essential human right, religious liberty.

The Holy See is committed and actively engaged in bringing a unified and strong collaborative voice among religious leaders. A good example of that may be found in the joint declaration signed by Pope Francis and the Grand Imam of Al-Azhar, Ahmad Al-Tayyeb, on “Human Fraternity” this past 4 February in Abu Dhabi.  In that declaration, among many other interesting points, they “resolutely declare that religions must never incite war, hateful attitudes, hostility and extremism, nor must they incite violence or the shedding of blood. These tragic realities are the consequence of a deviation from religious teachings.

Another point from the declaration that merits being mentioned is the need to develop and respect the concept of citizenship.  “The concept of citizenship is based on the equality of rights and duties, under which all enjoy justice. It is therefore crucial to establish in our societies the concept of full citizenship and reject the discriminatory use of the term minorities which engenders feelings of isolation and inferiority.  Indeed, the equal protection and rights under the law remains an essential ingredient of the fair application of justice for all, underscoring the equal dignity of every person.

A few weeks after the Papal trip to the United Arab Emirates, the Holy Father made a visit to Morocco and there, among other things, made an appeal together with His Majesty King Mohammed VI, recognizing the unique and sacred character of Jerusalem / Al-Quds Acharif, and expressing their deep concern for its spiritual significance and its special vocation as a city of peace.

There needs to be both mutual autonomy and constructive collaboration between religious communities and the State.  Although independent, both entities are striving to promote the wellbeing of the human person who is at once both a citizen and religious.  When the State and religion become conflated or blurred, as Pope Francis has rightly warned, “religion risks being absorbed into the administration of temporal affairs and tempted by the allure of worldly powers that in fact exploit it.”  The obfuscation of the freedom to exercise one’s religion freely in some places of the world remains a serious concern for the Holy See.  On his return from Morocco, the Holy Father said: “Today, we Christians face the danger that some governments will take away our freedom of conscience, which is the first step [towards taking away] freedom of worship. The answer is not easy, but let us not just accuse Muslims, let us also accuse ourselves for these countries where this is happening, and this should make us feel ashamed.”

Having considered a number of the more significant developments coming from the Holy See in the past year, I would like to offer a couple of other points for consideration.

One is the indispensable role of religious education as a key to the prevention of any radicalization that could then lead to extremism.  It is necessary that teaching in schools, from the pulpits and through the media, especially through digital technology and social media, do not foment intransigence and extremist ideologies, but rather foster mutual respect, dialogue and reconciliation.

In the condemnation of the abuse of religious freedom, especially when religious sentiment is used in an attempt to justify terrorism, there must also be a concomitant conviction and real commitment to stopping the market and flow of weapons and financing that fuels these atrocities against religious targets, whether persons or sites.  Governments need to do everything possible to ensure that they are not collaborating with State- or non-State actors that are involved in such reprehensible activities.

Finally, the involvement of religious leaders in the collaborative effort with States and international organizations in the search for effective solutions to avoid further abuses to the freedom of religion and advancing this fundamental human right should not be limited to the level of dialogue.

Thank you for your attention.