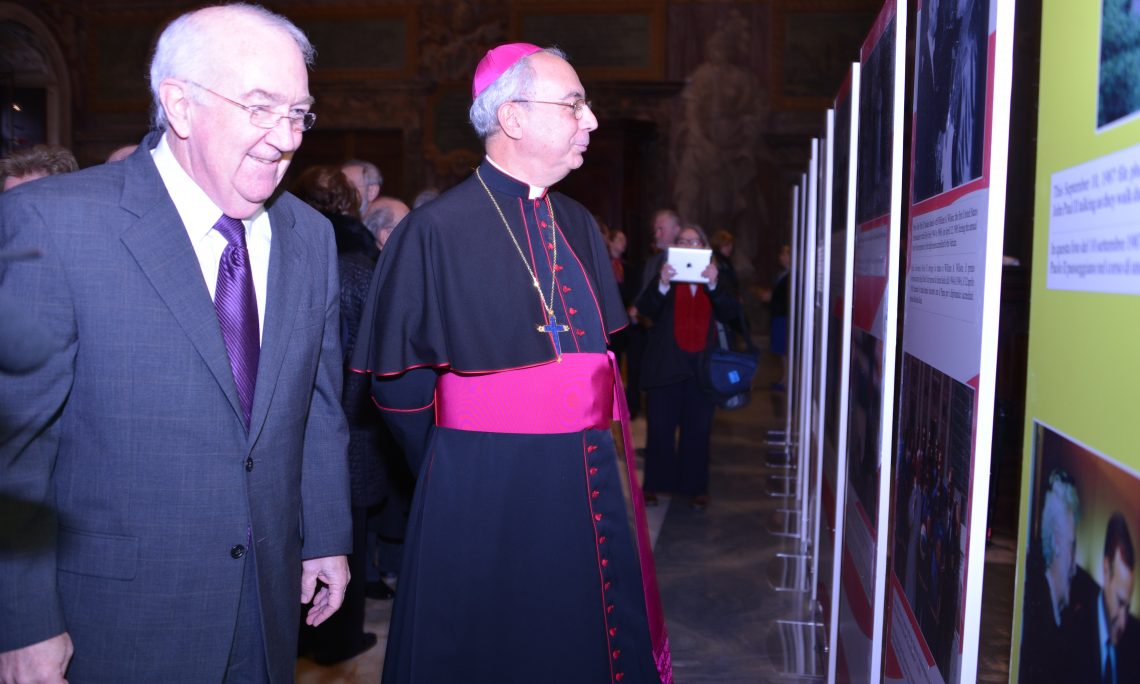 Mr Ambassador,
Your Eminences,
Your Excellencies, Ladies and Gentlemen,

I am happy to extend my sincerest thanks to you, Mr Ambassador, for the kind invitation to speak on the occasion of the commemoration of the 30th Anniversary of the establishment of diplomatic relations between the United States of America and the Holy See.

As we are all aware, relations existed long before then. The first high-level contact between the Holy See and the United States of America was made in 1788, when George Washington informed Pope Pius VI, through Benjamin Franklin, that in the newly-born Republic there was no need for authorization from the State for the appointment of a Bishop, in that the Revolution had brought freedom to the colonies, first and foremost, that of religious freedom. The Pope then appointed Fr John Carroll, a Jesuit priest, as the first Catholic Bishop in the United States of America, constituting thus the Catholic hierarchy in the newly independent Country. From that first diocese, the Premier See of Baltimore, there are now more than 200 dioceses in the United States. Nevertheless, almost two centuries would pass before diplomatic relations were established. This occurred in 1984, thanks to Blessed John Paul II and to President Ronald Reagan, who appointed William Wilson, at that time already his Personal Representative to the Holy See, as the first US Ambassador to the Holy See, while Archbishop Pio Laghi, later Cardinal, already serving in Washington as Apostolic Delegate, became the first Apostolic Nuncio to the United States. Since then there have been ten Ambassadors, including Ambassador Hackett, and five Apostolic Nuncios, including the present one, Archbishop Carlo Maria Viganò.

The relations between the Holy See and the United States have grown, slowly but steadily, stronger over time. This has been demonstrated by the Papal Visits to the United States: since the Visit of Pope Paul VI to New York in 1965 there have been seven visits by Blessed John Paul II and, in 2008, the Visit of Pope Benedict XVI. Since the first visit of a US President to the Vatican, by Woodrow Wilson in 1919, there have been numerous visits. President Barack Obama visited Pope Benedict XVI in 2009 and he will shortly be coming again to meet Pope Francis, at the end of March.

The building of relations between the Holy See and the United States down through the years has enabled an important dialogue also on the international level. If indeed the United States represents one of the principal actors on the international scene, and the Church and the Holy See share in the joys and the hopes, the sorrows and the anxieties of humanity, the Church “offers to mankind the honest assistance…in fostering that brotherhood of all men which corresponds to this destiny of theirs.” (Gaudium et Spes 3).

On the 21 March 1848, the United States Senate debated a budgetary proposal for the allocation of funds for the Chargé d’Affaires to Pope Pius IX, appointed by President James Polk. During the debate, Senator Lewis Cass, in referring to Pope Pius IX, said the following: “The eyes of Christendom are upon its sovereign…Much is expected of him…The diplomacy of Europe will find full employment at his Court, and its ablest professors will be there in the Vatican”.

I don’t think that it would be out of place to say that the claims of Senator Cass are also being proven true today with Pope Francis, who continues to encourage the Church and the international community to not be mere onlookers concerning the great challenges that afflict humanity but to engage in tackling them. This has been demonstrated by the numerous meetings that the Holy Father has had from the very first days of his pontificate with Heads of State, Heads of Government, and leaders of international organizations, who have all desired to meet with him and to discuss with him the problems of our times, which are many and serious. These require determination and consultation by all the actors of the international scene. Here, then, is the necessity and importance of an ever closer dialogue between the Holy See and the United States of America. The Holy Father, in his Apostolic Exhortation Evangelii Gaudium points out that “for the Church today, three areas of dialogue stand out where she needs to be present in order to promote full human development and to pursue the common good: dialogue with states, dialogue with society – including dialogue with cultures and the sciences – and dialogue with other believers who are not part of the Catholic Church” (N° 238).

Pope Leo XIII, in his Encyclical Longinqua of 1895, referred to the earliest relations between the Holy See and the United States of America. And I quote: “…at the epoch when the American colonies, having, with Catholic aid, achieved liberty and independence, coalesced into a constitutional Republic the ecclesiastical authority was happily established amongst you; and at the very time when the popular suffrage placed the great Washington at the helm of the Republic, the first Bishop was set by apostolic authority over the American Church. The well-known friendship and familiar intercourse which subsisted between these two men seems to be an evidence that the United States ought to be conjoined in concord and friendship with the Catholic Church.” (Pope Leo XIII, Longinqua, (1895), n. 4).

It is my wish, therefore, that the friendship and cooperation between the Holy See and the United States be ever more strengthened within the family of Nations, in order that the world may progress in building peace, justice and fraternity.