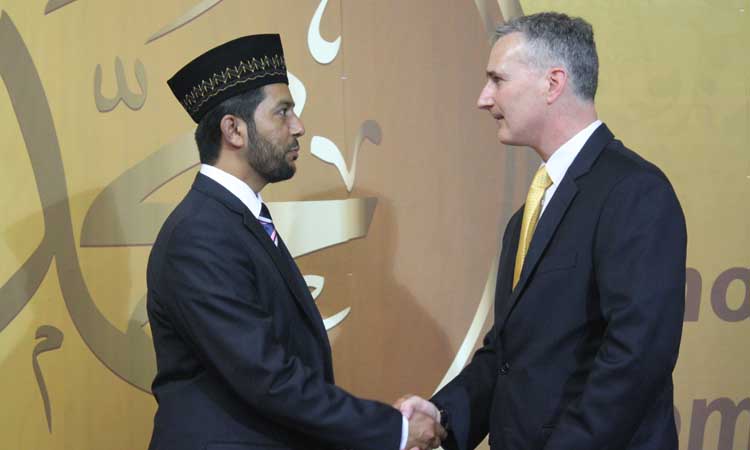 Good afternoon.  I’d like to thank Imam Tariq for the invitation to be here for your annual meeting.

It’s an honor for me to be here to learn more about the Ahamdiyya Community.  What began more than a century ago in a remote village in Punjab, India, has grown into a global network, with tens of millions of worshippers in nearly two hundred countries.

It’s a movement that focuses on the benevolent message of Islam ─ on promoting the values ​​of peace, brotherhood, and charity.  It speaks to the strength of your motto, “love for all, hatred for none,” that more than ten nationalities are represented here today.

As part of a global community of worshippers, you know too well that for many millions of minority religious communities around the world, persecution, repression, and discrimination are daily realities.

Far too often and in far too many countries, believers and non-believers are targeted for violence, and their human rights are limited or restricted entirely.

The United States cares deeply about advocating for religious freedom around the world.  Protecting and defending this basic and fundamental human right – to worship freely – is fundamental to who we are as a nation, and as a people.  Freedom of religion is among the most cherished rights of Americans, codified in our Bill of Rights – the First Amendment to our founding Constitution.

And history has shown that when governments safeguard every person’s freedom to worship peacefully, society is more just, free, and stable.

Religious understanding and tolerance are bulwarks against the forces of extremism – they are the necessary foundations of peace and security.  This is not an opinion, but a fact:  When governments favor or sanction a specific religious, ethnic, or sectarian group over others, violent radicalism thrives.

When you look around the world, religious freedom is under threat:  The jailing of Christian pastors and Baha’is in Iran; the imprisonment of non-Muslims and Muslims alike in Egypt; the prosecution of members of minority groups for blasphemy in Pakistan; anti-Semitic incidents rising globally; the Chinese government’s control of religious beliefs and activities; and Muslim communities, including the Rohingya in Burma, facing violence, discrimination, and anti-Muslim sentiment.

President Trump has made clear that the protection and promotion of religious freedom is a foreign policy priority of the United States.  It’s also one of the top priorities of our diplomatic relationship with the Holy See.

We work closely with the Vatican to secure the future of not just Christian minorities, but all religious minorities who are persecuted simply for professing their faith.

I think of Pope Francis’ visit to Burma and Bangladesh, after which he professed that the Church “won’t close [its] hearts or look away,” at the plight of the Rohingya.  And during his visit to Egypt, calling on humanity to not hold entire religions “accountable for the crimes of any small group of followers.”  The United States and our Embassy in particular remain vigilant for threats to human rights, particularly the denial of the free practice of religion.

In this context, I would like to recall one stark reminder:  The case of Asad Shah, a member of the Ahmadiyya community.  Mr. Shah was a well-respected businessman in Glasgow, Scotland.  But another man, intent on denying him his basic right to practice his faith, traveled to Glasgow for the sole purpose of his murder.  Just hours before he was brutally murdered, Mr. Shah sent a “Happy Easter” message to his Christian friends.

There is much more work to be done.  We must not let Asad Shah’s death be in vain.  I hope that together, we will secure this basic right for the millions that do not have it, for our children, and for future generations.

Thank you again for having me here.  Thank you.