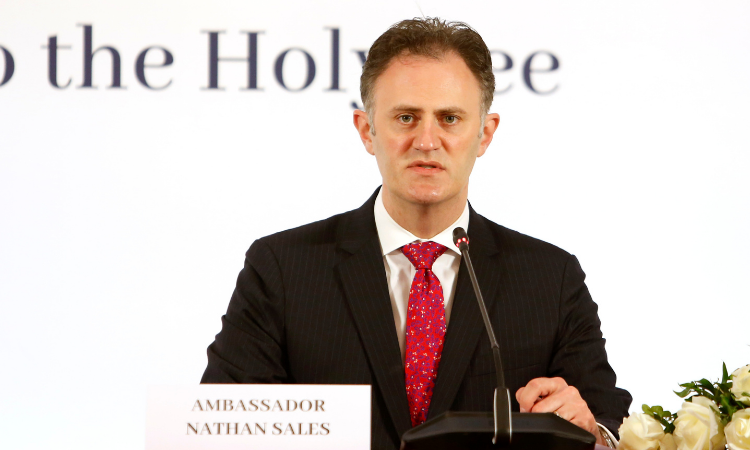 • Thank you to our gracious host, Ambassador Gingrich, and our Vatican counterparts for joining this symposium for a third year.

• I appreciate your dedication to this event and more broadly to the partnership between the United States and the Holy See to defend religious liberty around the world. It is a measure of the importance the United States attaches to this issue that we are here, in person, despite the global COVID crisis.

I. IMPORTANCE OF RELIGIOUS FREEDOM

• Nearly 55 years ago, not far from here – in St. Peter’s Basilica – bishops from over 100 countries convened at the end of the Second Vatican Council to promulgate Dignitatis Humanae, which declared, “the human person has a right to religious freedom.”

• Our country was settled by believers who fled religious persecution in Europe. They knew that there are limits on what demands the state can legitimately place on the faithful, and that the government has no moral authority to interfere with the rights of conscience. They knew what should be rendered unto Caesar, and what should not.

• Our first president, George Washington, wrote to Jewish citizens in Newport, Rhode Island, in 1790 to emphasize to them that the United States “gives to bigotry no sanction, to persecution no assistance.”

• Religious liberty is worth defending because it is essential to human flourishing. It is intrinsically valuable. But it also must be preserved because of the social benefits it produces. Religious freedom is the foundation of a society that promotes human dignity, and therefore it is essential for achieving peace and stability within and among nations.

• We know that, where governments uphold the right of people to believe what they will, speak about their beliefs, gather, worship and teach their beliefs to their children, we see greater political freedom, vibrant economic development, and flourishing rule of law. Where religious freedom is repressed, we find conflict, instability, violence, and terrorism.

• Therefore, for reasons of both morality and security, the United States and the Holy See have championed the right to religious freedom for all. Indeed, the heart of the relationship between the U.S. and the Vatican is our longstanding cooperation on defending and promoting international religious freedom, based on our shared values and interests.

• Yet despite these efforts, religious freedom continues to face threats around the world. We see people persecuted or denied their right to practice their faith around the world. The list, I’m sorry to say, is a long one.

• In Burma, security forces have committed horrific acts of violence and ethnic cleansing of Rohingya Muslims in northern Rakhine State that caused more than 740,000 Rohingya to flee to Bangladesh and many others to be displaced within Burma.

• In Nigeria, ISIS and Boko Haram continue to attack Muslims and Christians alike.

• And, of course, we can’t speak about threats to religious freedom without mentioning China.

• Since its founding, the Chinese Communist Party has seen religion as a threat to its authoritarian grip on power. That’s why for decades it has shown extreme hostility to members of all religious faiths and beliefs, including Uyghurs and other Muslims, Tibetan Buddhists, Christians, and Falun Gong practitioners.

• Things have only gotten worse under General Secretary Xi Jinping, who has presided over a veritable war on faith.

• The Chinese Communist Party has undertaken massive abuses against Uyghurs, ethnic Kazakhs, ethnic Kyrgyz, and members of other minority groups in Xinjiang.

• The CCP has detained more than one million people in internment camps. Its campaign of repression also includes credible reports of torture and forced labor, and attempts to “Sinicize” the practice of the Islamic faith.

• There are disturbing and horrific reports of the CCP’s use of coercive population control methods, including forced abortion, forced sterilization, and involuntary implantation of birth control. The CCP’s abuses against women also include forced marriage, sexual assault, and detention for violations of its draconian population control policies.

• Others face horrific treatment, too, including Christians, Tibetan Buddhists, and Falun Gong practitioners. Communist authorities continue to shutter houses of worship, spy on and harass the faithful, and insist that the Party is the ultimate authority on religious affairs.

• “Let me be blunt. The world is watching. History will judge whether freedom-loving peoples met this challenge.”

• The United States will continue to speak out against the CCP’s crimes against the faithful, and we will take action to target those responsible for these abuses. We are prepared to work with any likeminded partner that is willing to join us in defending religious freedom.

• Let me say a few words about the concrete steps we’ve taken to counter religious persecution, not just in China, but around the world.

• One important way we do this is by exposing abuses when they occur, and shining a spotlight on their perpetrators.

• My colleague, Ambassador Brownback, leads the State Department’s Office of International Religious Freedom, which produces the most comprehensive reports on religious freedom available for the public.

• The United States also uses designations of “Countries of Particular Concern” and “Special Watch List” countries as part of our efforts to end particularly severe violations of religious freedom and hold perpetrators accountable.

• In addition to our public diplomacy, we’ve also made great strides through our work with likeminded governments and stakeholders.

• Again, I’d like to commend Ambassador Brownback for spearheading the creation of the International Religious Freedom or Belief Alliance. This is the first-ever international network devoted exclusively to religious freedom, with 33 countries currently as members.

• Finally, where diplomacy has failed to end religious persecution, the United States has not hesitated to use punitive measures to impose costs for the worst abusers of religious freedom.

• On July 9, the Secretary imposed visa restrictions on three senior CCP officials and their immediate family members for their role in human rights abuses in Xinjiang, in parallel to Treasury Department financial sanctions on those officials and the Xinjiang Public Security Bureau.

• These and other measures demonstrate U.S. resolve to protect religious freedom for all and uphold our shared values.

• President Trump signed an Executive Order on Advancing International Religious Freedom on June 2, which cements the vigorous defense of international religious freedom as a key aspect of American foreign policy and diplomacy.

• The Executive Order also requires the use of economic and other tools, including foreign assistance, visa restrictions, and sanctions, to advance religious freedom abroad.

• In leveraging these tools, it is critically important that the United States be able to count on our allies and partners to join us in this righteous cause. All who believe in the importance of religious freedom have a role to play in pressing for religious freedom around the world. We can accomplish more when we speak and act collectively.

• The United States has had no greater partner on the defense and promotion of religious freedom everywhere in recent decades than the Holy See. I look forward to continuing our work together in defense of the defenseless and on behalf of persecuted religious groups for years to come.

• Once again, I want to express my thanks and appreciation to Ambassador Gingrich s for the opportunity to speak on this panel today, and to our Vatican counterparts for your commitment and partnership to advance religious freedom around the world.