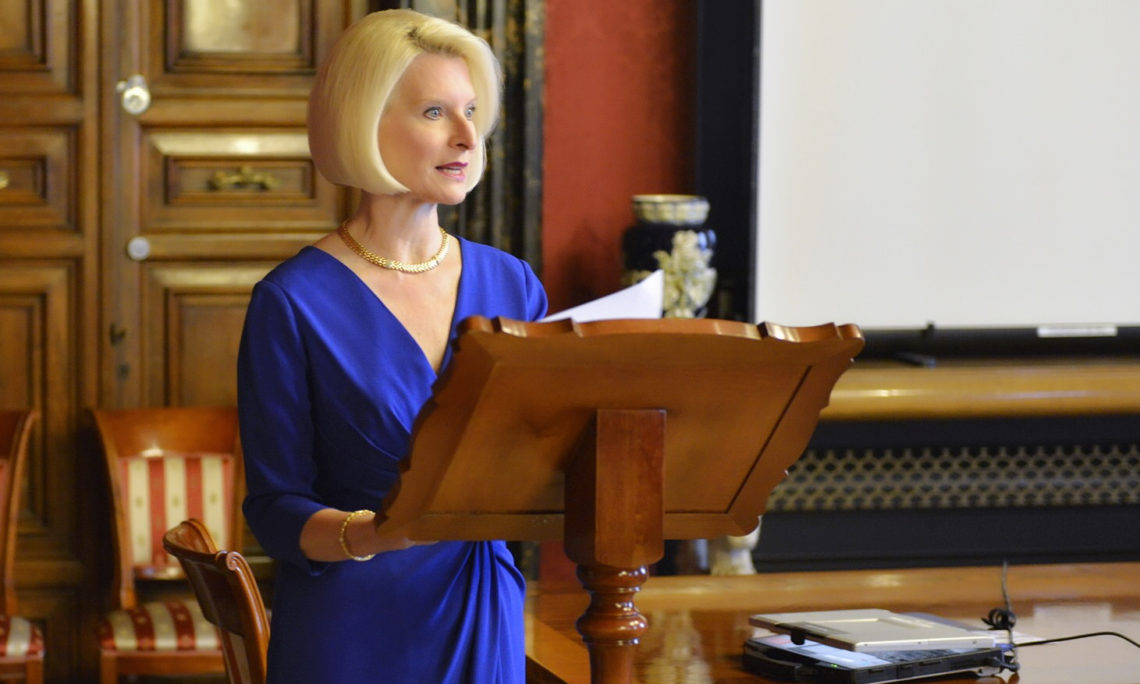 Good morning.  I am honored to be with you today.

I would like to recognize two members of our Embassy Vatican team – Legal Attaché, Kieran Ramsey, and Assistant Legal Attaché, Liz Rosato.  Thank you for all of your hard work and support.

The FBI’s motto is “Fidelity, Bravery, Integrity.”  I cannot imagine a more fitting description of what you do in the service of our nation.

Every day, FBI special agents and professional staff courageously confront the most dangerous threats America faces, keeping her citizens, at home and abroad, safe and secure.

When the FBI was created in 1908, every employee worked out of a single building in Washington, D.C.  Today, field offices are located throughout our nation and in countries around the world.

In this room alone, we have special agents and professional staff who serve at posts across Europe and Eurasia – and others who serve in Washington, D.C.

The FBI currently has 64 legal attaché offices in key cities around the globe – covering more than 200 countries, territories, and islands.

The profound importance of the FBI in confronting the challenges of the 21st century cannot be overstated.  From human trafficking, to hostage recovery to international terrorism – the threats America faces are as complex and perilous as ever in our nation’s history.

Here in Rome, the FBI works closely with the Vatican, sharing information regarding religious officials being held in conflict areas around the world.

The State Department and the Holy See routinely exchange information on hostage cases of mutual concern.

In Syria, one of the most fertile grounds for cooperation, Vatican officials have had great success working with our government contacts.

The Bureau is also deeply engaged on the global fight against human trafficking.  I have had the opportunity to witness firsthand the capability and expertise the FBI brings to this cause.

The United States government is committed to ending this horrific practice.  President Trump pledged to bring the “full force and weight” of the U.S. government to combat this “epidemic.”

“Human trafficking,” as Secretary Tillerson noted in last year’s Trafficking-in-Persons Report, “is one of the most tragic human rights issues of our time.  It splinters families, distorts global markets, undermines the rule of law, and spurs other transnational criminal activity.”

Last year, Secretary Tillerson announced a $25 million award from the State Department to the Global Fund to End Modern Slavery.  Congress has since appropriated an additional $25 million to this cause.

As the United States Ambassador to the Holy See, I am fully dedicated to combatting this global scourge.

The United States and the Catholic Church share a common commitment to this endeavor.  Last month I highlighted America’s victim-centered approach at the Santa Marta Conference here in Rome.  The conference brought together law enforcement leaders, Catholic clergy, and others to exchange best practices in fighting modern slavery.

The victim-centered approach has made a significant impact on the prosecution of traffickers and the recovery of survivors.

This approach ensures that trauma experts, who fully understand the psychological and physical manifestations of trafficking, work directly with law enforcement on survivor recovery.

I also recently visited the Human Smuggling and Trafficking Center in Washington, D.C.  I learned about the joint efforts of the Federal Bureau of Investigation and Homeland Security Investigation to dismantle and disrupt trafficking networks.

During my visit I was briefed on Operation Safe Haven, which, to date, has led to the arrest of dozens of traffickers from Mexico and Central America.

The victim-centered approach of Operation Safe Haven has been used to stabilize and care for survivors.  Because of testimony provided by the victims, all of the arrested perpetrators were convicted on human trafficking charges.

It is crucial that law enforcement develop strong and enduring partnerships with NGOs, faith-based organizations, and others on the front lines of survivor support.

Catholic shelters, for instance, play a crucial role in survivor care and recovery.

Recently, I had the privilege of meeting with survivors from Nigeria, the Ivory Coast, and Romania, during a visit to Casa Rut in Caserta, Italy.  Hundreds of migrant women and human trafficking survivors have found refuge and support at this Catholic shelter.  I am grateful to Liz Rosato for accompanying me on this important visit.

In the United States, over three hundred NGOs and faith based organizations are engaged in survivor care and recovery.

No single government can end the global scourge of human trafficking.  Governments, NGOs, faith-based communities, and survivors must work together to eradicate this horror.

Our Embassy to the Holy See works diligently to advance America’s foreign policy interests by leveraging the Church’s vast global reach and influence.  We uniquely serve as a global engagement post to advance shared values and interests.

President Reagan described our mission perfectly when he said, “As a people and as a government, we seek to pursue the same goals of peace, freedom, and humanity, along political and economic lines that the Church pursues in its spiritual role.”

Although its territory is less than one quarter of a square mile, the Holy See’s influence extends to over 1.3 billion Catholics worldwide and to hundreds of millions of non-Catholics as well.

183 countries have diplomatic relations with the Holy See – only the United States has a larger diplomatic presence in the world.

The collaboration between the United States and the Vatican, like the partnership between the State Department and the FBI, is critical in advancing America’s policies and priorities.

The United States Embassy to the Holy See will continue to work closely with the FBI to promote freedom, justice, and peace around the world.

Thank you for the opportunity to be with you today.