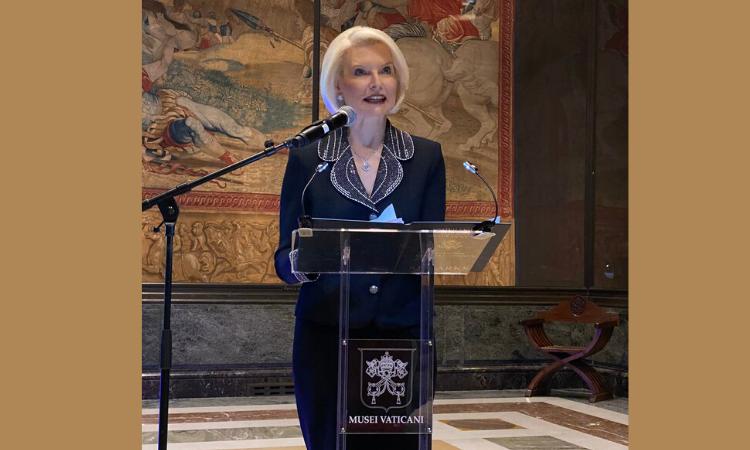 Remarks by Ambassador Gingrich at the opening of “Crivelli’s Gold,” an exhibit Commemorating the 35th Anniversary of Formal Diplomatic Relations Between the U.S. and the Holy See

Your Eminences, your Excellencies, distinguished guests, and friends – good evening and welcome! It is my honor to participate in the opening of Crivelli’s Gold, commemorating the 35th anniversary of formal diplomatic relations between the United States and the Holy See.

On behalf of the U.S. Embassy, I would like to extend my gratitude to His Eminence Cardinal Bertello for making this exhibit and reception possible.

I would like to thank my friend, Dr. Barbara Jatta, and her team at the Vatican Museums, for organizing this evening’s event. Under Dr. Jatta’s leadership, the Vatican Museums has excelled in its mission to preserve and share the extraordinary legacy of culture, history, and art collected by popes over the centuries.

I would also like to thank Father Kevin Lixey, the International Director of the Patrons of the Arts in the Vatican Museums, for his work with the Patrons in the United States and around the world.

This event would not have been possible without the patrimony of the California and New England Chapters of the Vatican Museums Patrons of the Arts, responsible for restoring the three Crivelli paintings featured in this exhibit.

The Patrons are part of a long tradition of American generosity, dedicated to preserving and restoring the vast collection of art in the Vatican Museums. This tradition is what brings us together this evening.

Today, U.S. Patrons fund approximately 80 percent of all restoration projects at the Vatican Museums. It’s an inspiring statistic. And it illustrates the close bond between the United States and the Holy See.

American generosity is vital to preserving the Vatican’s priceless works of art – all sensitive to the effects of time.

American Patrons and other individual donors help ensure that the unique spiritual and cultural mission of the Vatican Museums continues to flourish; and that these works of art endure and inspire generations to come.

As Pope Francis said to U.S. Patrons last year, “You have continued a centuries-long tradition, imitating the achievements of those who contributed to the Church’s history through art.”

Of course, there are other ways that Americans contribute to the Vatican Museums.

The museum’s collection of masterpieces includes works by American artists, such as Will Barnet, Leonard Baskin, and Abraham Rattner, as well as precious artifacts donated by missionaries in North America.

American contributions to the Vatican Museums are part of what makes our partnership with the Vatican a world-wide force for good.

In doing so, they formally recognized a bond that existed since the founding of our nation.

Our friendship with the Holy See has grown over the centuries into a global partnership based on common values, mutual respect, and moral leadership.

And as this exhibit illustrates, our ties extend to cultural and artistic preservation, which is vital to our sense of shared history, values, and identity.

On behalf of the U.S. Embassy to the Holy See, I thank you all for being here to celebrate our 35th anniversary, and the enduring diplomatic and cultural ties between the United States and the Holy See. 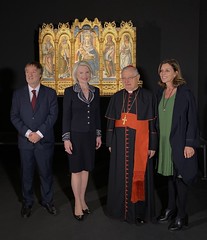