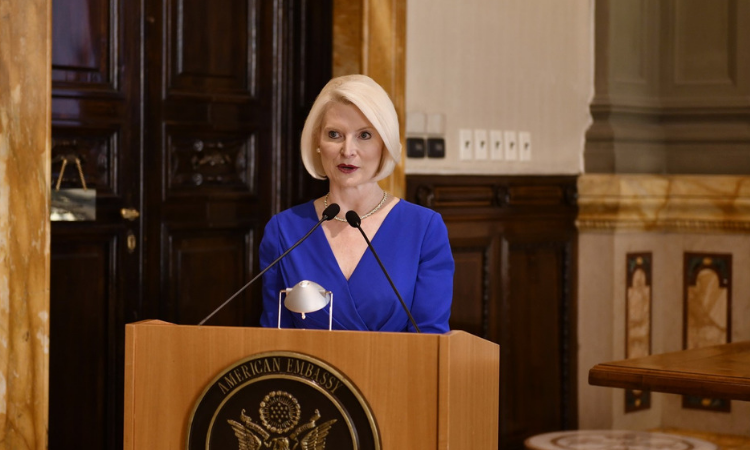 I’d like to thank Kelly Degnan, Jillian Itharat, and Cassandra Hamblin for organizing this conference and for the opportunity to be with you.

I would also like to thank Ambassador Eisenberg for his thoughtful remarks and participation today.

The Ambassador and I agree on the need for greater opportunities for women to fully participate in leadership roles.

I’d like to begin by talking about the importance of strong mentorship, something I’ve been fortunate to experience throughout my career.

Both as an aide in Congressman Steve Gunderson’s office and as Chief Clerk on the House Agriculture Committee, I was mentored by strong women.  In many ways my mentors were real pioneers, serving in roles that were historically held by men.

I quickly learned from them that hard work, personal integrity, and cheerful persistence were essential to success.

When I left Capitol Hill and became the CEO of Gingrich Productions, I found myself fortunate to have mentors and colleagues who helped me become a better leader and creative thinker.

Kevin Knoblock was one of those mentors – a Los Angeles based filmmaker who helped me produce nine documentary films.

When I first met Kevin, I wanted to learn everything I could about filmmaking – from fundraising, to script writing, to narration, to b-roll, to music.

Kevin had spent his entire professional career in the business.  He was instrumental in teaching me about the film industry.  I was most fortunate to have him as a mentor.

As the author of a children’s American history series, I was blessed to work with a great team of women, including Kathy Lubbers, an accomplished agent, Marji Ross, a visionary publisher, and Susan Arciero, a talented illustrator.

I also had a great writing partner in Ross Worthington.  We debated endlessly over exact language and storytelling.  Today Ross is one of President Trump’s senior speechwriters.

Of course, here at the Embassy to the Holy See, I could not succeed without the incredible support and guidance from the women and men on our hardworking team.

Having strong mentorship is only one important part of ensuring an environment of opportunity for women.

Empowering women and girls, across all sectors, is fundamental to the betterment of society.  It requires a comprehensive and dedicated approach from us all.

Today, women comprise half of the world’s population, yet own only one-third of the world’s businesses.  Women provide the majority of the world’s unpaid care, yet have less access than men to finance, markets, and property.

Throughout my career, whether it was working on the House Agriculture Committee, running a business, authoring books, producing documentary films, or helping my husband run for President, I’ve learned that success is not about adjusting to the status quo, but actively working to change it.

Success takes hard work, preparation, personal commitment, mental toughness, and a willingness to argue for your point of view.

Leading a successful career over a lifetime is tough.  All of us have faced and will continue to face challenges.  But some obstacles are specific to women.

Women must be encouraged to embrace challenges and to realize their greatest potential.

Gender disparity is a challenge unique to women.  This has historically been an issue in the foreign service.

Of more than 4,000 U.S. ambassadors that have served abroad, only nine percent have been women.

We can and must do better.

President Trump’s National Security Strategy clearly identifies women’s empowerment as integral for our national security and a priority for this administration.

The President is backing this up with concrete initiatives, including helping more women enter STEM fields in the United States, mobilizing over $1.6 billion dollars to support women entrepreneurs in the developing world, and signing the bipartisan Women, Peace, and Security Act of 2017 into law.

This law requires that our government include women’s participation in peace negotiations and conflict prevention.  The United States is in fact the first country in the world with comprehensive legislation on women, peace, and security.

As the U.S. Ambassador to the Holy See, I’ve seen firsthand how women leaders can facilitate peace, justice, and human dignity in the most harrowing environments imaginable.

For the past two years, our embassy successfully nominated Catholic nuns working on the frontlines of conflict, for the State Department’s International Women of Courage Award.

We also successfully nominated a Trafficking in Persons Hero this year.

These women do heroic work on a daily basis and their efforts should be amplified.

I am dedicated to being a voice for them.

In my role as U.S. Ambassador to the Holy See, I am committed to promoting women in the workplace and beyond.

I’m also fortunate to partner with other female Ambassador’s to the Holy See on this effort.

The Ambassadors of the United Kingdom, Australia, the Philippines, Ukraine, Georgia, Peru, Panama, Sweden, Austria, and Benin – just to name a few – are all women.  We work together to support and encourage women leaders at the Holy See and across the Catholic Church.

We do so because equality and women’s empowerment are not superficial issues.  They are critical to building resilient, democratic societies, to supporting open and accountable governance, to ending extreme poverty, and to furthering international peace and security.

As we help each other succeed we help create a system and an environment in which women will have more opportunities.

So to the women here today, know that your conversations in this conference, and your own awareness and determination, will accelerate the process of creating new opportunities for each of you.

And to all of you, thank you for participation, your enthusiasm, and for your commitment to create greater opportunities for women.