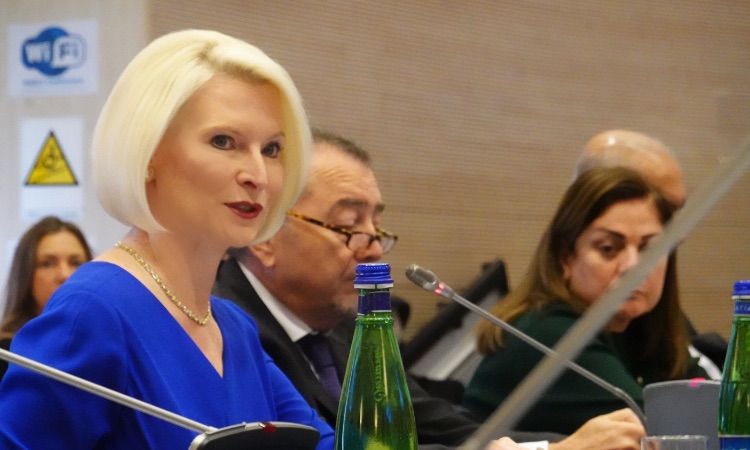 Remarks by Ambassador Gingrich at the “Women, Faith, and Culture” Seminar

Good morning.  I’d like to thank the International Foundation for Interreligious and Intercultural Education for the opportunity to be with you.

I’d also like to thank Foreign Minister Milanesi for his thoughtful remarks, and the Italian Ministry of Foreign Affairs for hosting this timely discussion.  Understanding the intersection of faith, culture, and the role of women is critically important.

Today, I’m delighted to speak about the United States’ commitment to religious freedom, and how it influences U.S. foreign policy and strengthens women’s rights.

The relationship between religious liberty and the rights of women is often misunderstood.  A better understanding of this connection is integral to building peaceful, prosperous, and secure societies.

The right to worship freely is codified in the First Amendment to the Constitution of the United States.  It is therefore regarded as America’s first freedom.

Since the earliest days of our nation, America has understood religious liberty as a necessary element of a free society.

Last month the United States celebrated the 20th anniversary of the signing of the 1998 International Religious Freedom Act.  This act expands U.S. foreign policy capabilities to promote and defend religious freedom around the world.

But we are also mindful of the many challenges that remain – of those places around the world where millions are unable to worship freely.

Even in countries where religious freedom is regularly defended, people of faith continue to face violence and persecution, as we witnessed in Pittsburgh, Pennsylvania on October 27. The attack on peaceful worshippers at the Tree of Life Synagogue was an act of anti-Semitism and pure evil.

As this horrific attack illustrated, it’s a dangerous time to be a person of faith.  Unfortunately, repression, violence, and discrimination are far too common for millions of believers throughout the world.

Today, 80 percent of all people live in a religiously repressed environment.  This reality is unacceptable and cannot be tolerated.  All of us, from governments to faith communities to civil society, must work together to address this crisis.

The United States government is doing its part to advance and defend the right of religious freedom around the world.  The Department of State’s annual International Religious Freedom Report is a great example of this effort.

The International Religious Freedom Report is a fact-based assessment of violations and abuses of religious freedom across 200 countries.  It relies on evidence, not assumptions, of religious persecution throughout the world, and holds governments accountable.

The United States is leading a comprehensive, international effort to promote this fundamental human right.  In July, Secretary of State Mike Pompeo convened the first-ever Ministerial to Advance Religious Freedom in Washington D.C., which brought together representatives from 87 governments, religious leaders, members of civil society, and survivors of religious persecution.

At the Ministerial, delegations announced actions to protect and promote religious freedom and committed to host regional follow-up conferences in the coming months.

President Trump and his Administration understand that these efforts are necessary to combat persecution, discrimination, and violence.

Unfortunately, women and girls are uniquely vulnerable to these threats, from early or forced marriages, to human trafficking, to sexual and gender-based violence.

At the Ministerial, I had the privilege to chair a panel that examined challenges women face today, and the intersection between women’s rights and religious freedom.  What we found is that governments and others often perpetrate or tolerate abuses against women in order to intimidate, destroy, or drive out religious minorities.

While these acts are often committed in the name of religion, they in fact represent perversions of religious faith.  They also encourage a misconception that freedom of religion and women’s rights are incompatible – that increased religious freedom restricts equality and justice for women.

This could not be further from the truth.  Harmful practices and traditions affecting women and girls are illegitimate – including those performed in the name of religion.  The assertion of one human right cannot justify violations or abuses of another.

When religious freedom is protected, women’s rights are strengthened and societies flourish.  To appreciate why this is the case, it’s important to understand the true definition of religious freedom.

Religious freedom is a human right experienced by individuals – not religions.  When properly recognized by governments, religious freedom can and should allow for members of peaceful religious groups – of all faiths and denominations – to form and carry out their ministry.

The practice of religion is personal.  For many women and girls around the world it is an empowering and meaningful part of their lives.

Engaging with faith communities and religious leaders on women’s issues can be an effective means for advancing the rights of women.  These communities, for example, play a powerful role in health education in areas with high rates of illiteracy, especially among women and girls.

One of the best examples of this is Sister Maria Elena Berini, who for the last four decades has served in war-torn communities in Africa – first in Chad and now in the Central African Republic.

For the last 10 years, Sister Berini has performed astonishing acts of charity from her mission in Bocaranga, demonstrating grace and compassion.  During the worst periods of violence – when aid organizations recalled their staffs and embassies evacuated their citizens – Sister Berini remained.

Earlier this year, Sister Berini was honored by First Lady Melania Trump with the 2018 International Woman of Courage Award.  This award recognizes women around the world who have demonstrated exceptional leadership in advocating for peace, justice, and human rights – often at a great sacrifice.

Sister Berini is just one example of how women can be powerful leaders in their communities and beyond.

We know that when governments respect and protect religious freedom, they have greater protections and opportunities for women.

Millions of women and young girls are depending on us to be their advocates – to help them live better lives.

The U.S. Embassy to the Holy See will continue to defend and advance religious freedom and the empowerment of women and girls throughout the world.