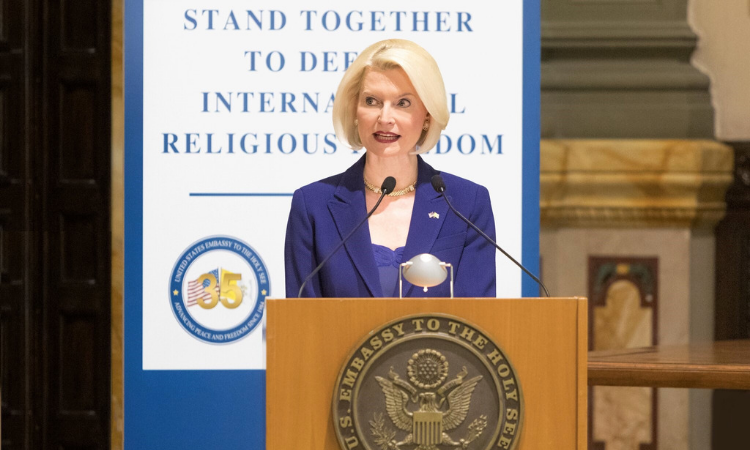 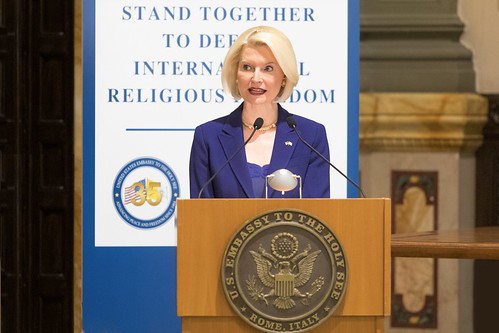 Remarks by Ambassador Gingrich at the “Stand Together to Defend International Religious Freedom” symposium.

Good morning.  Your Excellencies, distinguished guests, and friends – welcome to the U.S. Embassy to the Holy See!

I’m delighted to see so many of you here today, who are committed to advancing and defending religious freedom around the world.

I’d like to thank the Stand Together Project for partnering with us on this symposium. Stand Together was created to highlight the importance of religious freedom and to give a voice to persecuted Christians, especially those living in the Middle East.

Finally, I’d like to recognize our colleagues from the Holy See who are with us this morning. We are honored that His Eminence, Cardinal Parolin, will deliver closing remarks today. This year marks the 35th Anniversary of formal diplomatic relations between the United States and the Holy See.

This symposium is the first official event marking our anniversary, because securing and defending religious freedom is a fundamental priority for the United States and the Holy See.

The right to worship freely is often called America’s first freedom – a necessary component of U.S. foreign policy and our commitment to ensuring a more peaceful, prosperous, and secure world.

Safeguarding religious freedom is fundamental to the founding principles of the United States.  It’s part of who we are as a people and a nation.

Our symposium today comes at an urgent time. Unfortunately, for millions around the world, religious freedom is currently under threat or restricted entirely.

According to the Pew Research Center, more than 80 percent of the global population lives in places with “high” or “very high” religious restrictions, mostly targeting minority faiths.

This is not acceptable. And the United States is taking all necessary steps to address it.

The key speakers at the Ministerial were survivors of religious persecution and repression, including: A Christian woman who suffered extraordinary atrocities at the hands of North Korean authorities; a Yazidi woman who was cruelly treated by ISIS in Iraq; members of the Baha’I faith who were targeted by the regime in Iran; and a Uighur Muslim who was consigned to years in a labor camp in China, simply for practicing his faith.

Since 2017, Chinese authorities have detained more than one million ethnic Muslims. Uighurs, Kazakhs, and members of other Muslim minority groups have been targeted and forcibly relocated to internment camps. Family members pray and search for their missing loved ones.

The Trump Administration is deeply concerned, and considers this a deliberate attempt to persecute and control these Muslim minority groups.

In a few moments, we’ll see a video of a Uighur mother who was separated from her children and subjected to severe torture at the hands of Chinese authorities. Last week, Secretary Pompeo met with this mother, Mihrigul Tursun, and three other Uighurs, to reaffirm the steadfast support of the United States.

Of course, China is not the only center of such hostility. Religious persecution is a borderless phenomenon – and exists on every continent: Today, Anti-Semitism is on the rise around the world; Saudi Arabia routinely imprisons individuals for apostasy and blasphemy; Rohingya continue to suffer ethnic cleansing in Burma; and Russian authorities target and persecute peaceful religious groups at home and abroad – from Christians and Jehovah’s Witnesses, to Orthodox Ukrainians and Crimean Tatars.

These examples represent just a portion of religious persecution and repression today. The United States will not hesitate to speak out against these atrocities. We will continue to be a voice for those who are persecuted and repressed.

All of us gathered here today understand that religious liberty and tolerance are central to national security.

They are the bulwarks against the forces of extremism — the foundation of peace and security. History has shown that governments and societies that champion religious liberty are safer, more prosperous, and secure.

Together we must confront and counter those who practice, enable, or export religious persecution or violent extremism. All of us, across governments, civil society, faith organizations, and media, must work together to advance and defend this cause.

Global crises require global solutions. This is why Secretary Pompeo will once again convene the International Religious Freedom Ministerial in Washington D.C., from July 16th-18th. Given widespread interest, we anticipate that participation in this ministerial will be even greater than last year.

When it comes to religious freedom, President Trump’s Administration is combining principle with action.

In 2018 the United States announced over $178 million dollars in foreign assistance to support ethnic and religious minorities in Iraq. This brings the total U.S. assistance for these vulnerable communities to nearly $300 million dollars since 2017 – implemented by both the State Department and the U.S. Agency for International Development.

Beyond humanitarian efforts, the United States also understands the importance of interfaith dialogue to build bridges in order to facilitate peace.

In a speech in Riyadh to the Arab Islamic American Summit, the president advocated for religious tolerance, freedom, and dialogue. He said that, “For many centuries the Middle East has been home to Christians, Muslims and Jews living side-by-side (and that) we must practice tolerance and respect for each other once again.”

The Holy See also has a long history of encouraging religious freedom and tolerance through interreligious dialogue.

After Pope Francis’s visits to Burma and Bangladesh, he professed that the church “won’t close (its) heart or look away” from the plight of the Rohingya.

During his visit to Egypt, Pope Francis called on humanity not to hold entire religions “accountable for the crimes of any small group of followers.”

And the Holy Father’s recent visits to the United Arab Emirates and Morocco are great examples of the power of interfaith engagement. They mark a significant step toward coexistence, tolerance, and understanding between two of the world’s great religions.

The U.S. Embassy to the Holy See looks forward to continuing our important work with Pope Francis and the Vatican to advance interfaith dialogue and religious freedom.

And our embassy looks forward to working with all of you.  Together we can defeat the forces of religious persecution and intolerance, and advance and defend religious freedom around the world.