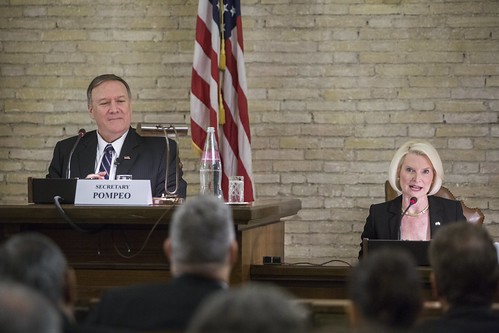 Your Excellencies, distinguished guests, and friends – good morning and welcome!

I’d like to thank His Eminence Cardinal Parolin, His Excellency Archbishop Gallagher, and the Holy See’s Secretariat of State for their partnership and support in making this symposium possible.

I’d also like to thank Secretary and Mrs. Pompeo for traveling to Vatican City to be here today.

Secretary Pompeo’s participation in this symposium illustrates the importance that the United States places on its diplomatic partnership with the Holy See.

For thirty-five years, the United States and the Holy See have shared a deep and enduring commitment to advancing peace, freedom, and human dignity.  Together we share one of the most consequential diplomatic relationships in the world.

When President Ronald Reagan and Saint John Paul II established official diplomatic relations in 1984, they understood that, together, the United States and the Holy See would be a world-wide force for good.

As President Reagan said, “This partnership would exist to the benefit of peace loving people, everywhere.”  And for thirty-five years it has done just that.  Our work impacts a wide range of global issues, from promoting religious freedom, to combatting human trafficking, to preventing conflict and violence.

Today’s symposium, “Pathways to Achieving Human Dignity: Partnering with Faith-Based Organizations,” is yet another chapter in our great legacy of friendship and collaboration.

We’ve convened this symposium because there has never been a more critical time to work with and to support faith-based organizations.

As President Trump has said, “These organizations lift people up, keep families strong, and solve problems at the local level.”

Today, religious freedom is under attack in nearly every part of the world. Faith based organizations, through their unique ability to build trust and encourage dialogue, can play a critical role in turning the tide.

Faith-based organizations are advocates for the most vulnerable among us, including those enslaved by human trafficking. They are also providers of humanitarian assistance, helping governments deliver aid effectively and honestly to those most in need.

For these reasons and more, I’m pleased to announce that the U.S. Embassy to the Holy See will award financial grants to each of the faith-based organizations participating in today’s symposium, to help support their work in the coming year.

Like President Trump, Secretary Pompeo has played a leading role in recognizing the importance of faith-based organizations.

Indeed, today’s symposium is a direct result of the Secretary’s Ministerial to Advance Religious Freedom, which was held this summer in Washington D.C.  We were delighted that Archbishop Gallagher was able to participate in this historic Ministerial – the largest human rights event ever held by the U.S. Department of State.

On behalf of the U.S. Embassy to the Holy See, we are honored to have Secretary Pompeo with us today and at the helm of the State Department.

Secretary Pompeo graduated first in his class at the U.S. Military Academy at West Point in 1986 and served with distinction in the U.S. Army.

After leaving active duty, he graduated from Harvard Law School, having been an editor of the Harvard Law Review.

Prior to joining the Trump Administration, he served in the U.S. Congress, representing the Fourth Congressional District of Kansas.

In 2017, President Trump appointed him Director of the Central Intelligence Agency.