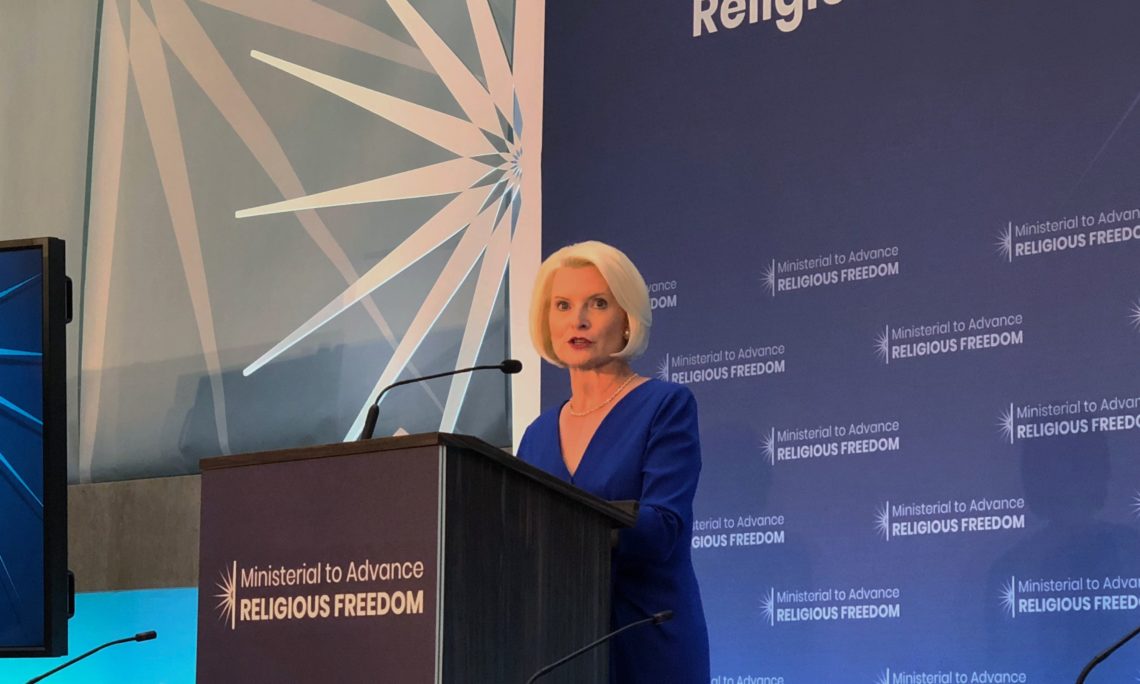 (As prepared for delivery)

Good afternoon.  I’d like to thank Secretary Pompeo and Ambassador Brownback for inviting me to speak on this important topic ahead of our panel.

This discussion, examining the intersections between religious freedom and women’s rights, could not come at a more pressing time.

Religious freedom is often called America’s first freedom.  Respect for religious freedom also facilitates and strengthens many other human rights, including freedom of expression, peaceful assembly and association, and, as this panel will explore, the rights of women.

This Ministerial to Advance Religious Freedom is about action across governments, religious institutions, and civil society to safeguard religious freedom.  It’s about identifying concrete ways to restrain persecution and combat the forces of discrimination, marginalization, and violence.

Sadly, women and girls are uniquely vulnerable to these threats, from early or forced marriages, to human trafficking, to sexual and gender-based violence.  Governments and others often perpetrate or tolerate these abuses in order to intimidate, destroy, or drive out disfavored religious groups.

And Rohingya, including thousands of women and girls, have faced ethnic cleansing in Burma, where the military has perpetrated brutal killings, widespread rape and sexual assault, and burned hundreds of villages.

While these and other repulsive acts have in part been committed on the basis of religion, they in fact represent perversions of religious faith.  These abuses have encouraged a misconception that freedom of religion and women’s rights are incompatible – that increased religious freedom restricts equality and justice for women.

These unfair and misled characterizations could not be further from the truth. When religious freedom is protected, women’s rights are strengthened, and societies flourish.

To appreciate why this is the case, it’s important to understand what religious freedom is in the first place.  Religious freedom is a human right enjoyed by individuals, not “religions.”  When properly recognized by governments, religious freedom can and should allow for members of peaceful religious groups – of all faiths and denominations – to form and carry out their ministry.

The human rights of women and religious freedom operate in concert with all other human rights – universal, indivisible, and interdependent.

However, harmful practices and traditions affecting women and girls cannot be accepted as legitimate, including those performed in the name of religion. The assertion of one human right cannot justify violations or abuses of other human rights.

Respect for religious freedom, according to a recent report by the United States Commission on International Religious Freedom, can play a role in responding to these harmful practices by mobilizing faith leaders and creating the conditions necessary for the peaceful practice of religion.

In many countries, engaging with highly influential faith communities and religious leaders can be an effective means for advancing the rights of women.

These communities, for example, play a powerful role in public education in areas with high rates of illiteracy, especially among women and girls.

Women religious leaders have long fostered inter-faith dialogue and conflict resolution.  One of the best examples of this is Sister Maria Elena Berini, a 2018 International Woman of Courage nominated by the U.S. Embassy to the Holy See.

For the last four decades, Sister Berini has served in war-torn communities in Africa – first in Chad and now in the Central African Republic.

For the last ten years, Sister Berini has dedicated herself to profound acts of charity at her mission in Bocaranga, demonstrating courage, grace, and compassion.

She is just one example of how women religious can be powerful advocates for reform within their communities and beyond.

And yet, persistent social and political barriers within many countries prevent or limit women from fulfilling their roles as agents of change and progress.

The facts are simple.  Governments that respect and protect religious freedom often have greater protections and opportunities for women.

Countries that do not compel religious conversion, and protect young girls from early or forced marriages, are more likely to defend women’s rights.

I am honored to be with you today, and excited to hear from our panel of experts.  This discussion is a perfect example of America’s enduring commitment to advancing religious freedom and the empowerment of women and girls through U.S. foreign policy.