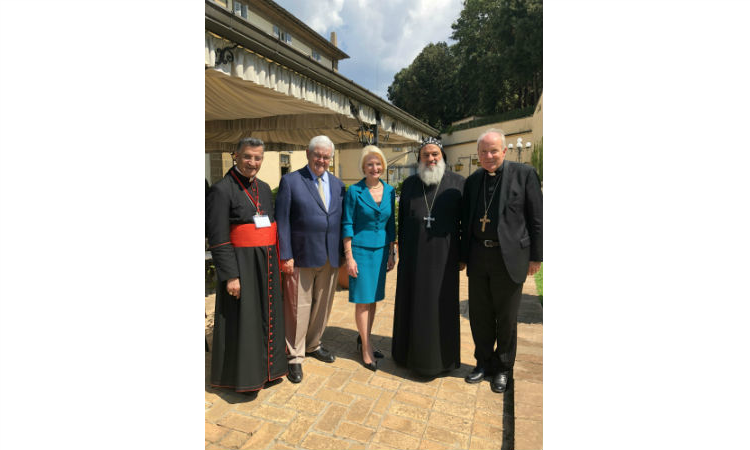 Good afternoon.  It’s an honor to be here.

I’d like to thank His Eminence Cardinal Schönborn and Dr. Christiaan Alting von Geusau for the opportunity to be with you today.

In 2010, Newt and I attended the first-annual meeting of the International Catholic Legislators Network.  I’m so pleased to see that this important gathering continues to grow and flourish.

This year’s meeting is devoted to protecting religious freedom around the world.  Unfortunately, this fundamental human right is increasingly under threat.

Today, eight out of every ten people live in countries where religious freedom is either nonexistent or threatened.

Meetings like this play an important role in turning the tide.  The honest and non-partisan exchange of ideas between like-minded leaders can help in effectively dealing with the critical issues of our time.

This understanding was the basis for last month’s Ministerial to Advance Religious Freedom, convened by Secretary Pompeo and Ambassador Brownback in Washington D.C.

This historic ministerial was the first of its kind, assembling leaders from around the world to discuss the challenges facing religious freedom, to identify concrete means to address persecution, and to promote greater respect for universal religious liberty.

The Ministerial to Advance Religious Freedom was the start of an international endeavor, by countries, faith organizations, and civil society, to coordinate and advance religious liberty for all.

As U.S. Ambassador to the Holy See and a lifelong Catholic, I was honored that His Excellency Archbishop Paul Gallagher, the Vatican’s Secretary for Relations with States, participated in the ministerial.

Promoting and securing religious freedom is a shared priority between the United States and the Holy See.

Recently, the U.S. Embassy to the Holy See partnered with the Vatican, Aid to the Church in Need, and the Community of Sant’Edigio, to host a symposium on defending religious freedom.  His Eminence Cardinal Parolin delivered compelling remarks, and the event featured powerful testimony from Yazidi and Rohingya survivors.

Together, the United States and the Holy See continue to defend and support those persecuted for professing their faith.  Under President Trump’s leadership, the Vatican can count on the United States to be a key ally in this endeavor.

The right to worship freely is America’s first freedom, codified in the First Amendment to our Constitution.  America’s defense of religious freedom is as old as our nation itself.  Our Founders understood religious freedom not as the state’s creation, but as an inalienable right from God.

Since we are joined today by current and former members of the U.S. Congress, including my husband Newt, I’d like to note that this year marks the 20th anniversary of America’s International Religious Freedom Act, which made the promotion of religious freedom a U.S. foreign policy priority.

As part of this law, the State Department delivers an annual report on International Religious Freedom to the U.S. Congress.

This assessment of violations and abuses of religious freedom, across 200 countries, serves as a crucial account of facts, not assumptions, of just how dangerous our present situation is.

There’s no point in sugar coating it.

Repression, violence, and discrimination are daily realities for millions of believers in nearly every region of the world.

What is most astonishing is that these examples represent just a portion of religious persecution and repression today.  It’s a dangerous time to be a person of faith.  We are at a critical moment.  We can and must do more.

All of us gathered here understand that religious liberty and tolerance are bulwarks against the forces of extremism — the foundation of peace and security.  History has shown that governments and societies that champion religious liberty are safer, more prosperous, and secure.

Governments, civil society, faith groups, and individuals must work together to defend and advance this cause.  Together we must confront and counter those who practice, enable, or export religious persecution or violent extremism.

Global crises require global solutions.  This is why Vice President Pence announced the launch of the Genocide Recovery and Persecution Response Program.  Through this program, the State Department and USAID will partner with local faith and community leaders to deliver aid to persecuted faith communities around the world, beginning in Iraq.

Moreover, Secretary Pompeo announced $17 million dollars of additional funding for clearing land mines in the Nineveh region of Iraq.  This is above the $90 million dollars, delivered earlier this year.

In addition, the State Department recently released the Potomac Declaration and the Potomac Plan of Action, which outline America’s vision for the international community to safeguard religious freedom.

The U.S. Embassy to the Holy See will continue to work closely with our Vatican partners and the International Catholic Legislators Network to support these and other initiatives, to defend and advance the cause of religious freedom for all.