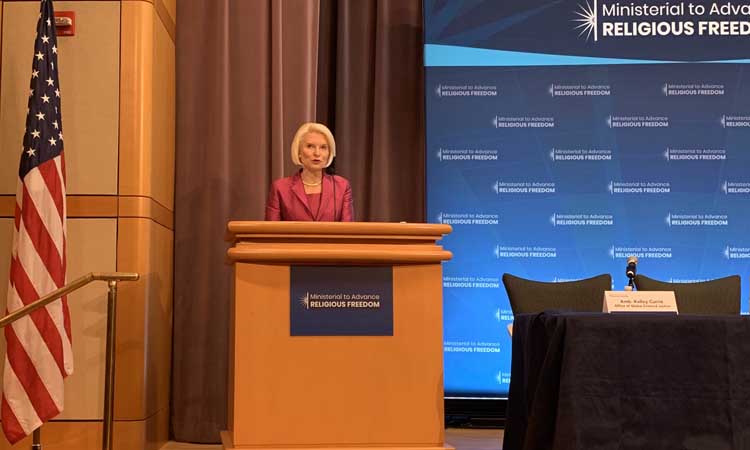 Remarks by Ambassador Gingrich at the 2019 Ministerial to Advance Religious Freedom.

Good morning. On behalf of Secretary Pompeo, I’m delighted to welcome you to the Department of State for the second day of the Ministerial to Advance Religious Freedom.

It’s an honor to address this distinguished gathering of civil society leaders and champions of religious liberty.

As the U.S. Ambassador to the Holy See, I work closely with the Vatican to advance and defend religious freedom.

I’m pleased to announce, that on October 2nd, as a direct result of this ministerial, the United States and the Holy See will co-host a symposium in Rome, highlighting the importance of working with faith-based organizations to support and protect religious freedom.

A crucial part of this week’s Ministerial is the opportunity to hear directly from victims and survivors of religious persecution.

If there is one fundamental goal of this ministerial, it is to rid the world of religious persecution and repression.

The United States is deeply committed to this endeavor, and will never settle for people of faith to be persecuted, repressed, or merely tolerated by governments or societies.

Religious freedom is a key building block of peace and security. It provides a foundation on which a society can thrive. It is in the interest of every nation to uphold and defend religious freedom.

Tomorrow Secretary Pompeo will emphasize this point as he addresses foreign leaders on concrete actions to protect religious minorities, and to defend religious freedom.

As we have seen throughout history, countries that respect religious freedom are safer, more prosperous, and secure.

One country that does not respect religious freedom is the People’s Republic of China.

The Chinese government has institutionalized a campaign of persecution, harassment, and imprisonment of religious minorities, including Muslims, Christians, and Buddhists.

As Ambassador Brownback said, the Chinese government is at war with faith. And it is a war they will not win.

Since 1999, the United States has designated China as a “Country of Particular Concern” under the International Religious Freedom Act of 1998. This is the most concerning category, reserved for governments engaged in severe violations of religious freedom.

And although China has emerged on the international stage, the appalling state of religious freedom on the mainland is only getting worse.

In the Xinjiang Uighur Autonomous Region, Chinese authorities have detained more than one million ethnic Muslims.

Uighurs, Kazakhs, and members of other Muslim minority groups have been targeted and forcibly relocated to internment camps.

There are reports in Henan Province that authorities have prohibited all minors from entering Catholic churches to celebrate Mass. Chinese officials are closing churches, confiscating Bibles, and persecuting their own citizens for simply practicing their faith.

Chinese authorities have banned Tibetan children from participating in religious activities. They’ve forced thousands of monks and nuns out of their homes and destroyed their monasteries. Indeed, speculation exists that the Communist Party in China will attempt to appoint the next Dalai Lama.

The international community must unequivocally insist that members of the Tibetan community, like members of all faith communities, should be able to select and revere their religious leaders without government interference.

In a few moments we’ll hear from an incredible young woman: Nyima Lhamo.

Nyima Lhamo is a human rights advocate and the niece of the late Tenzin Delek Rinpoche, a highly revered reincarnate lama, and one of the most prominent Tibetan political prisoners who died in a Chinese prison in July of 2015.

Recognized by His Holiness, the Dalai Lama, as a reincarnated lama in the 1980s, the Rinpoche was a community leader and a staunch advocate for the protection and preservation of Tibetan culture and religion for decades.

In 2002, the Rinpoche was arrested on false charges of exploding bombs and distributing dissident propaganda.

His trial was held in secret, and even though he had no independent legal counsel, and no real evidence against him, he received a death sentence.

The sentence was later commuted to life in prison, where he remained until his death.

As a result of Nyima Lhamo publicly questioning the cause of her uncle’s death, and demanding an investigation, she too was detained by Chinese authorities, along with her mother.

Nyima Lhamo subsequently fled Tibet, leaving behind her mother and her 6-year-old daughter.

Despite the risks, Nyima Lhamo continues to speak out about her uncle’s death, appealing to the international community to prevail upon the Chinese government to carry out a thorough investigation.

Her family continues to face harassment. Chinese authorities have threatened to persecute her family if she continues to advocate for transparency, accountability, and her God-given right to worship freely.