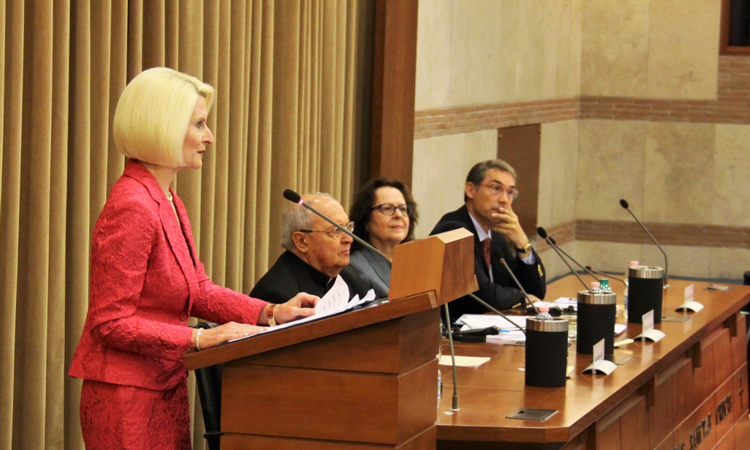 Good morning.  Your Eminence, Your Excellencies, distinguished guests, and friends – thank you for being here today.

I’d like to acknowledge Aid to the Church in Need and the Community of Sant’Egidio for helping make this symposium possible.  I am very proud of our embassy’s longstanding relationship with both of these incredible organizations.

I’d also like to thank Rector Navarro and the Pontifical University of Santa Croce for allowing us to gather in this beautiful auditorium.

Finally, I’d like to acknowledge the distinguished representatives of the Holy See who are with us this morning.  Promoting and securing religious freedom as a universal human right is a shared priority of the United States and the Holy See.  Together we will continue to defend and support those persecuted for professing their faith.

The right to worship freely is America’s first freedom, codified in the First Amendment to our Constitution. Safeguarding religious freedom is fundamental to the founding principles of the United States.  It’s part of who we are as a people and a nation.

America’s Founders understood religious freedom not as the state’s creation, but as an inalienable right from God.  Our commitment to this ideal remains steadfast.  President Trump has said that the United States will continue to be the paramount champion for religious freedom around the world.

This year marks the 20th anniversary of America’s International Religious Freedom Act, which made the promotion of religious freedom a U.S. foreign policy priority.  My husband, Newt, presided as Speaker of the House of Representatives when this law was passed in 1998.

As part of this historic act, the State Department annually delivers a report on International Religious Freedom to the United States Congress.  Recently, Secretary Pompeo released this year’s report in Washington D.C.

The International Religious Freedom Report is a fact-based assessment of violations and abuses of religious freedom across 200 countries.  It serves as a crucial account of facts, not assumptions, of religious persecution around the world.

As this year’s report shows – repression, violence, and discrimination are daily realities for millions of believers in every region of the world.  In many cases, their human rights are limited or restricted entirely.

Indeed, no religious community is immune from persecution.

What is most astonishing is that these examples represent just a small portion of religious persecution and repression around the world.

As these facts illustrate, it’s a dangerous time to be a person of faith.  We are at a critical moment.  We can and must do more.

All of us gathered here today understand that religious liberty and tolerance are bulwarks against the forces of extremism — the foundation of peace and security.  History has shown that governments and societies that champion religious liberty are safer, more prosperous, and secure.

For these reasons, Secretary Pompeo will convene the first-ever “Ministerial to Advance Religious Freedom” July 25-26 in Washington, D.C.

This Ministerial is about action across governments, religious institutions, and civil society. It’s about identifying concrete ways to restrain persecution and ensure greater religious freedom.

The Secretary’s Ministerial will be outcome oriented.  As this year marks the 70th anniversary of the Universal Declaration of Human Rights, participants will be asked to make a commitment to protect Article 18, which establishes the “right to freedom of thought, conscience and religion,” for all.

This Ministerial will seek new commitments from like-minded governments to structure a fund to support the work of those who defend religious freedom.

We will also call on participating countries to host their own religious freedom conferences with government representatives, religious leaders, members of civil society, and others over the next year and a half.

Our gathering today is a part of a comprehensive, international effort to incite action to defeat religious persecution and repression.

This symposium is, in many ways, a forerunner to the upcoming Ministerial in Washington.

Our collective collaboration with the Holy See provides a unique opportunity to advance and preserve this fundamental human right around the world.

The innovative ideas and solutions shared in this room will be delivered to Secretary Pompeo, and will be used to inform and enhance the conversation in Washington, D.C.

Governments, civil society, faith groups, and individuals must work together to advance religious freedom and to strengthen peace, stability, and security throughout the world.

Global crises require global solutions.  We must come together to confront and counter those who practice, enable, or export religious persecution or violent extremism.

Only through cooperation and understanding can we safeguard the human right of religious freedom for all those seeking to live their lives freely and in accordance with their faith.