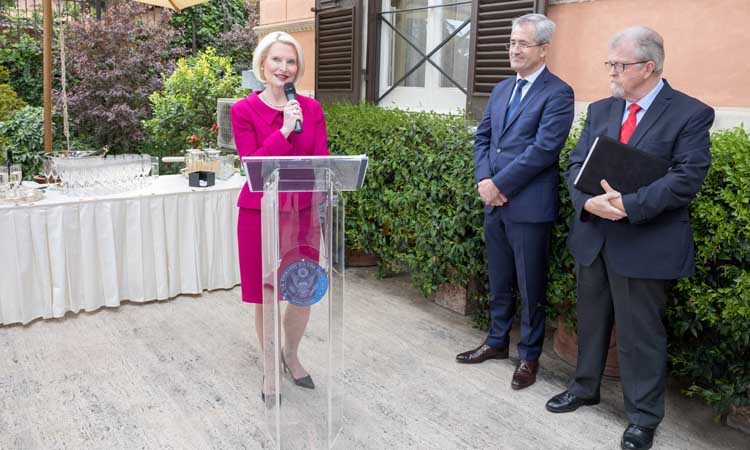 Newt and I are so pleased to have you here, and to pay tribute to the memory of Monsignor O’Flaherty.

I’m particularly delighted and honored that members of Monsignor O’Flaherty’s family are with us, as well as relatives of Major Sam Derry, Corporal Kenneth Sands, and others who helped operate the Rome Escape Line — which saved thousands of lives during World War II.

The O’Flaherty Memorial Society is dedicated to sharing the story of Monsignor’s O’Flaherty’s extraordinary life, and his bravery and selflessness during World War II. The story of this devout Irish priest from Killarney, and skilled Vatican diplomat, is incredible to behold.

For a long time, during the dark days of World War II, Monsignor O’Flaherty was the most wanted man in Rome. The Nazis tried in vain to capture him.  His ability to evade capture and disguise himself, earned him the nickname, the “Scarlet Pimpernel of the Vatican.”

By the end of the war, Monsignor O’Flaherty helped save over 6,500 Americans, Jews, and Allied soldiers. In honor of his heroism, Monsignor O’Flaherty was awarded the U.S. Medal of Freedom with Silver Palm, and received the Commander of the British Empire from the United Kingdom, among many other decorations.

Simply stated, we’re here to honor the memory of an extraordinary man, whose name will live on through history. We’re also here because your society has faithfully carried forward Monsignor O’Flaherty’s mission and values. The Hugh O’Flaherty Humanitarian Award is just one example.

I was so pleased to learn that the 2017 recipient of the O’Flaherty Humanitarian Award was none other than a Loreto sister from Ireland that I have come to know very well — Sister Orla Treacy.

Recently, I had the privilege of nominating Sister Orla for another special honor – the International Woman of Courage Award. I joined Sister Orla in Washington a few weeks ago as she was recognized for her incredible work on behalf of women and peace in South Sudan.  It’s fitting that we share this connection.

In many ways, the O’Flaherty Memorial Society and the U.S. Embassy to the Holy See share a common commitment to safeguarding freedom and human dignity. Our unique mission here in Rome, is dedicated to this purpose. We work diligently to promote U.S. values and policies around the world by building upon the vast reach and influence of the Vatican.

Our partner, the Holy See, is engaged on every continent – advancing human rights, defending religious freedom, providing health care, and educating those most in need. Today, 183 countries have diplomatic relations with the Holy See.  Only the United States has a larger diplomatic presence in the world.

America benefits from this vast reach and soft-power influence.  This is why President Reagan established an official U.S. Embassy to the Holy See in 1984. Governments alone, however, cannot solve the many challenges of the 21st century.  Organizations like the Monsignor Hugh O’Flaherty Memorial Society play a critical role.

As the U.S. Ambassador to the Holy See, and a lifelong Catholic, it is my hope that your work, in honor of Monsignor O’Flaherty, will continue to grow and flourish.