Emergency Information for American Citizens
PreviousNext
Expired Passport Information
After June 30, 2022, U.S. citizens who are overseas and planning to return to the United States will no longer be able to use an expired U.S. passport to enter the United States.
COVID Testing Requirements
Air travelers to the United States no longer need to show proof of a negative COVID-19 test for entry.
Alerts for U.S. Citizens
Read alerts for U.S. Citizens
Emergency Assistance
Local Emergency Information and Contacts
Visit Travel.State.gov for More Information
PreviousNext
Remarks by Ambassador Gingrich at a Reception in Honor of the Knights of Columbus
By U.S. Mission Holy See
5 MINUTE READ 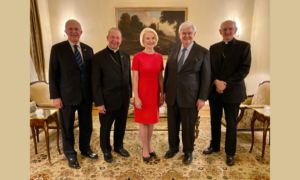 Newt and I are honored to welcome you to Villa Richardson. First, I’d like to congratulate all of you as you celebrate 100 years of charitable activity in Rome. As Pope Francis said, the Knights of Columbus “have demonstrated unswerving devotion to the Successor of Peter.”
We’re delighted to be joined this evening by Supreme Knight, Carl Anderson, and his wife, Dorian. This year marks Carl’s 20th year as the head of the world’s largest Catholic service organization.

Carl has led the Knights of Columbus to unprecedented levels of charitable giving, while overseeing the growth of the organization to nearly 2 million members.

Congratulations, Carl, on your 20th anniversary!

In 1882 Father Michael McGivney founded the Knights of Columbus – based upon the principles of charity, unity, and fraternity. Today, under Carl’s leadership, the Knights are stronger and more faithful than ever.

In 2018 the Knights of Columbus gave nearly $186 million dollars to charity and donated nearly 77 million hours of hands-on service.

This organization has a special place in my heart. For years my father was a Knight at St. John’s Catholic Church in Whitehall, Wisconsin.
And as an Ambassador, I’m often reminded of the charitable service the Knights of Columbus provide throughout the United States and around the world.

The Christian Refugee Relief Fund, for example, has raised more than $25 million dollars to benefit persecuted Christians in the Middle East.

The Food for Families Program has delivered millions of pounds of food to those who would otherwise go to bed hungry.

And the Warriors to Lourdes Pilgrimage, has sent hundreds of wounded warriors and their families to Lourdes, France, for physical and spiritual healing.

Over the years, the Knights of Columbus have also supported the work of the U.S. Embassy to the Holy See – from our annual Independence Day celebration, to our recent 35th Anniversary reception and exhibition at the U.S. Diplomacy Center.

Thank you for your most generous support of these and other important initiatives.

As you may know, the U.S. Embassy to the Holy See works with the network of the Catholic Church, which extends to more than 1.3 billion people worldwide.

Catholic organizations, like the Knights of Columbus, are crucial partners.

Over the last two years, I’ve highlighted the importance of government collaboration with faith-based organizations.

On October 2, 2019, our embassy co-hosted a symposium with the Vatican, promoting the efforts of faith-based organizations to protect religious freedom, combat human trafficking, and deliver humanitarian assistance.

Just a few weeks ago, Vice President Pence visited the Vatican and met with Pope Francis, where they discussed the importance of faith-based partnerships in supporting Christian communities in the Middle East.

And recently, I participated in President Trump’s Summit on Human Trafficking at the White House, where I highlighted the power of faith-based partnerships to eradicate the evil of modern-day slavery.

The U.S. Embassy to the Holy See will continue to stand side-by-side with faith-based organizations, like the Knights of Columbus, to advance peace, freedom, and human dignity around the world.

I now have the distinct honor of welcoming Supreme Knight Carl Anderson to say a few words.

Have a wonderful night, everyone.