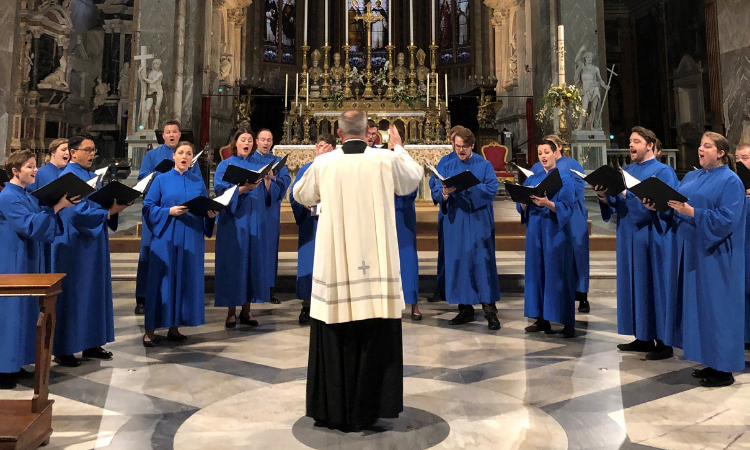 Remarks by Ambassador Gingrich at a 35th Anniversary Choir Concert.

Your Eminence, Your Excellencies, distinguished guests, and friends – good evening and welcome!

I’d like to thank Father Serra, the Rector of the Basilica of Santa Maria Sopra Minerva for the opportunity to be here this evening.

I’d also like to thank Monsignor Walter Rossi, the Rector of the Basilica of the National Shrine of the Immaculate Conception, for making this concert possible.

And finally, I’d like to thank Dr. Peter Latona and the Choir of the Basilica for sharing their talents with us tonight.

The Choir of the Basilica is a vital part of the Basilica of the National Shrine in Washington, DC – and is dedicated to performing and recording beautiful sacred choral music throughout the liturgical year.

Its gifted professional singers lift our hearts and strengthen our faith.

Throughout its illustrious history, the Choir has performed for numerous dignitaries and heads of state, including, Pope Benedict, and Pope Francis.

As the U.S. Ambassador to the Holy See, and a member of this choir for two decades, I am delighted to host tonight’s concert in honor of the 35th anniversary of diplomatic relations between the United States and the Holy See.

Thirty-five years ago, President Ronald Reagan and Saint John Paul II established one of the most consequential diplomatic relationships in history.

Over the years, the United States and the Holy See have worked together to address global challenges. Our partnership, built on a foundation of trust, mutual respect, and moral leadership, has advanced peace, freedom, and human dignity around the world.

Tonight’s concert is a celebration of this great legacy.

So without further ado, it is my honor to present Dr. Peter Latona and the Choir of the Basilica of the National Shrine of the Immaculate Conception.