Home Home | News & Events | Remarks by Ambassador Gingrich at a Screening of “The Divine Plan: John Paul II, Ronald Reagan, and the Dramatic End of the Cold War.” 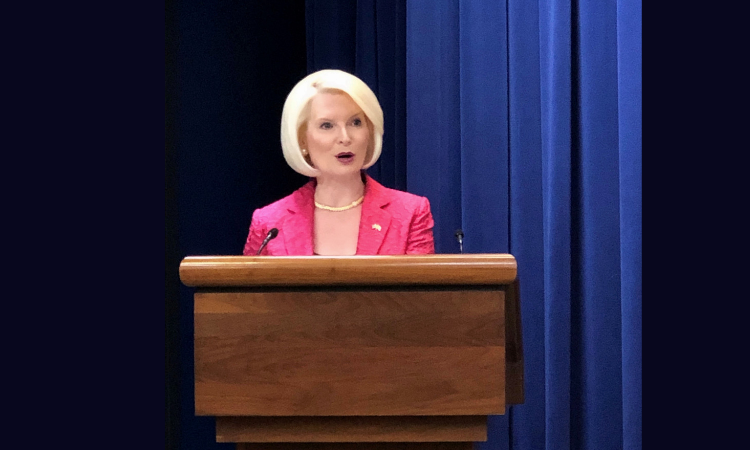 Good evening.  I’d like to thank Joseph Grogan for the opportunity to be with you.

I’d also like to thank and congratulate Robert Orlando for creating this wonderful documentary film!

As a Polish American, a lifelong Catholic, a filmmaker, and the U.S. Ambassador to the Holy See, I can attest to the extraordinary significance of Saint John Paul II’s pilgrimage to Poland in 1979, and its impact on President Ronald Reagan.

As you just witnessed, Saint John Paul II’s nine-day pilgrimage to his homeland changed the course of the 20th Century, and launched one of the most consequential diplomatic partnerships in history.

President Reagan first met with Pope John Paul II at the Vatican in 1982.  Upon returning to the United States, the President instructed the U.S. State Department to work closely with the Holy See and ordered the opening of a full-fledged embassy.

In our nation’s earliest years, consular representatives were sent to what was then the Papal States.  Even after the Papal States dissolved in 1870, the United States and the Holy See continued to engage at a distance.

Throughout much of the 20th Century, U.S. presidents recognized the importance of the Holy See in advancing peace and justice around the world.  During World War II, President Roosevelt’s envoy to the Vatican worked with the Church to mitigate the humanitarian crisis in Europe.

But as the Second World War gave way to the Cold War, the destructive forces of the Soviet Union threatened to conquer the free world.

As we just watched in this film, the Polish Pope and the American President were under no delusions about the task ahead.  They realized that an unofficial relationship between the United States and the Holy See was no longer adequate to meet the dangers posed by the Soviet Union.

That was forever changed in 1984.  This new diplomatic partnership, as President Reagan said, “Would exist to the benefit of peace-loving people, everywhere.” And for 35 years it has done just that.

Of course, the necessity of our work with the Holy See did not end with the fall of the Berlin Wall.  President Reagan not only forged a strong personal relationship with Saint John Paul II, but also an important diplomatic bond between the United States and the Holy See – one that endures to this day.

The United States views its partnership with the Holy See as critical to promoting peace, freedom, and human dignity.  Our work touches a wide range of global issues, from promoting religious freedom, to combatting human trafficking, to preventing conflict and violence.

Like the United States, the Holy See is engaged on every continent, with access and credibility in the world’s most troubled areas – including places where many governments are unable to work.

The U.S. Embassy to the Holy See relies on the enormous reach of the Vatican’s network to serve as a global engagement post, to defend and promote our shared priorities around the world.

President Ronald Reagan and Saint John Paul II understood the potential and significance of this relationship.  Their partnership paved the way; their example is ever-present.  The U.S. Embassy to the Holy See will continue to honor and uphold this great legacy.