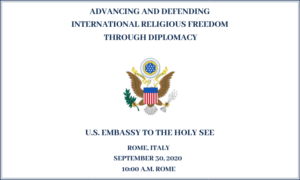 Religious persecution and restrictions on religious freedom are among the most pressing global human rights concerns today.  Promoting and securing religious freedom is a cornerstone of the United States’ diplomatic relationship with the Holy See.

“The United States understands that upholding the right to religious freedom is not just a moral necessity, it is a national security imperative.  When nations effectively promote and protect religious freedom, they are safer, more prosperous, and secure,” said U.S. Ambassador to the Holy See Callista Gingrich.

Symposium panelists will include representatives from the U.S., Holy See, and UK governments, as well as leaders from the Aid to the Church in Need and the AVSI Foundation.  The moderator for both panels will be John Allen, President and Founder of Crux.  Please see the attached list for additional details.

This symposium will be held at the Westin Excelsior in Rome.  Please note that COVID-19 health and safety precautions will be adhered to strictly.  A limited number of attendees and journalists will be allowed in-person with advance registration.  All others will be able to follow the symposium live on the U.S. Embassy to the Holy See Facebook page:  @HolySee.USembassy.