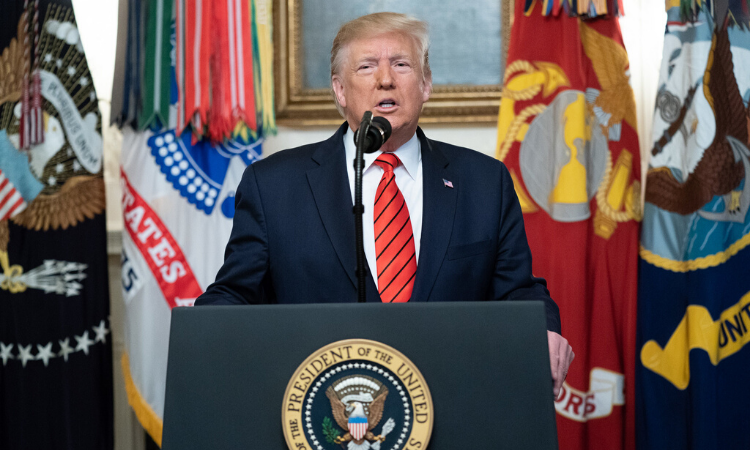 Human trafficking erodes personal dignity and destroys the moral fabric of society. It is an affront to humanity that tragically reaches all parts of the world, including communities across our Nation. Each day, in cities, suburbs, rural areas, and tribal lands, people of every age, gender, race, religion, and nationality are devastated by this grave offense. During National Slavery and Human Trafficking Prevention Month, we reaffirm our unwavering commitment to eradicate this horrific injustice.

Trafficking crimes are perpetrated by transnational criminal enterprises, gangs, and cruel individuals. Through force, fraud, coercion, and sexual exploitation of minors, traffickers rob countless individuals of their dignity and freedom, splinter families, and threaten the safety of our communities. In all its forms, human trafficking is an intolerable blight on any society dedicated to freedom, individual rights, and the rule of law.

Human trafficking is often a hidden crime that knows no boundaries. By some estimates, as many as 24.9 million people ‑- adults and children — are trapped in a form of modern slavery around the world, including in the United States. Human traffickers exploit others through forced labor or commercial sex, and traffickers profit from their victims’ horrific suffering. The evil of human trafficking must be defeated. We remain relentless in our resolve to bring perpetrators to justice, to protect survivors and help them heal, and to prevent further victimization and destruction of innocent lives.

This year marks nearly 20 years since our Nation took decisive steps in the global fight against human trafficking by enacting the Trafficking Victims Protection Act of 2000 (TVPA) and nearly 15 years since the United States ratified the United Nations’ Palermo Protocol to Prevent, Suppress, and Punish Trafficking in Persons, Especially Women and Children (Palermo Protocol). Both the TVPA and the Palermo Protocol established a comprehensive framework for combating human trafficking by establishing prevention programs, creating victim protections, and advancing prosecutions under expanded criminal statutes to usher in the modern anti-trafficking movement domestically and globally. These two measures illustrate a global consensus on the issue, and yet as a Nation we must continue to work proactively to foster a culture of justice and accountability for this horrific crime.

My Administration is committed to using every available resource, strengthening strategic partnerships, collaborating with State, local, and tribal entities, and by introducing innovative anti-trafficking strategies to bring the full force of the United States Government to help end this barbaric practice once and for all. In January 2019, I was proud to sign both the Frederick Douglass Trafficking Victims Prevention and Protection Reauthorization Act and the Trafficking Victims Protection Reauthorization Act, reaffirming our commitment to preventing trafficking in all forms.

With my resolute support, executive departments and agencies are steadfastly continuing the battle to abolish this form of modern slavery. In October 2019, the 19 members of my Interagency Task Force to Monitor and Combat Trafficking in Persons convened to highlight significant accomplishments in our sustained, whole-of-Government fight against human trafficking. The Anti-Trafficking Coordination Team (ACTeam) initiative, led by the Department of Justice, more than doubled convictions of human traffickers in ACTeam districts. Additionally, the Department of Homeland Security initiated more than 800 investigations related to human trafficking and the Department of State launched its Human Trafficking Expert Consultant Network, comprised of survivors and other subject matter experts, to inform its anti-trafficking policies and programs. The Department of Health and Human Services continues to provide funding for the National Human Trafficking Hotline, and in Fiscal Year 2018 it funded victim assistance programs that provided benefits and services to more than 2,400 victims. For the first time, the Department of Transportation committed $5.4 million in grants to the prevention of human trafficking and other crimes that may occur on buses, trains, and other forms of public transportation. The Office of Management and Budget also published new anti-trafficking guidance for Government procurement officials to more effectively combat human trafficking in Federal contracting.

The inherent dignity, freedom, and autonomy of every person must be respected and protected. Despite the progress we have made and the momentum we have built toward ending human trafficking, there is still more to be done. This month, we renew our resolve to redouble our efforts to deliver justice to all who contribute to the cruelty of human trafficking, and we will tenaciously pursue the promise of freedom for all victims of this terrible crime.

NOW, THEREFORE, I, DONALD J. TRUMP, President of the United States of America, by virtue of the authority vested in me by the Constitution and the laws of the United States, do hereby proclaim January 2020 as National Slavery and Human Trafficking Prevention Month, culminating in the annual observation of National Freedom Day on February 1, 2020. I call upon industry associations, law enforcement, private businesses, faith-based and other organizations of civil society, schools, families, and all Americans to recognize our vital roles in ending all forms of modern slavery and to observe this month with appropriate programs and activities aimed at ending and preventing all forms of human trafficking.

IN WITNESS WHEREOF, I have hereunto set my hand this thirty‑first day of December, in the year of our Lord two thousand nineteen, and of the Independence of the United States of America the two hundred and forty-fourth.