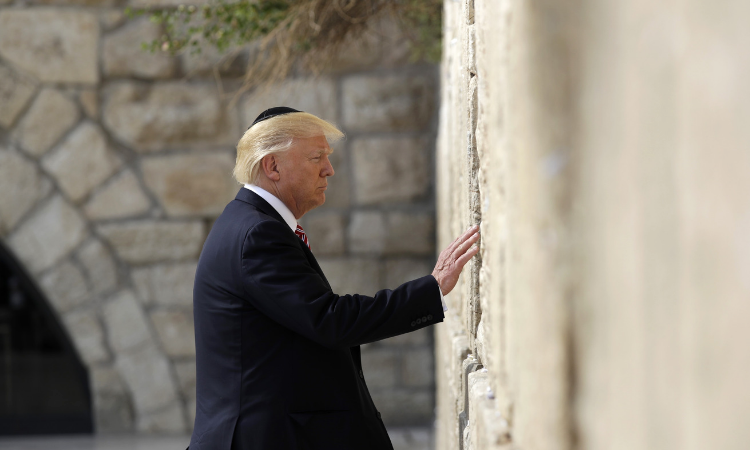 BY THE PRESIDENT OF THE UNITED STATES OF AMERICA

As we observe Jewish American Heritage Month, our Nation celebrates nearly 4,000 years of Jewish history and honors the numerous contributions of Jewish Americans to our country and the world.  Rabbi Akiva, a great Jewish scholar, declared that a central principle of the Torah is to “love thy neighbor as thyself.”  Jewish Americans have repeatedly demonstrated their dedication to this commandment, helping the downtrodden and pursue justice, sanctifying the name of God, and embodying the best of America.

During a Jewish wedding ceremony, it is customary for the newlywed couple to shatter a glass.  This longstanding tradition commemorates the destruction of the Temple in Jerusalem and symbolizes that even during times of heightened joy, one should remember the painful losses Jews suffered throughout history.  In the same way, all Americans bear a moral responsibility to stand alongside our Jewish communities and learn the lessons of tolerance that run through the tragedies that have befallen the Jewish people — both long ago and, sadly, in recent times.  Reflecting on these events steels our resolve that they never happen again.

Unconscionably, rates of anti-Semitic hate crimes have risen globally, and Jewish institutions have been vandalized and violently attacked.  This past October, we mourned alongside our Jewish brothers and sisters following the attack at the Tree of Life Synagogue in Pittsburgh, Pennsylvania, in which 11 worshippers were killed, making it the deadliest attack against Jews in American history.  Then, on the sixth-month anniversary of that horrific attack and on the last day of Passover, we grieved as the Chabad of Poway Synagogue was the target of yet another act of anti-Semitic violence, in which one worshipper lost her life and three others were wounded.  As Americans, we unequivocally condemn the pernicious, baseless hatred that is anti-Semitism.

Our American tradition compels us to reject the source of anti-Semitism.  Following the Revolutionary War, the Jewish community of Newport, Rhode Island, was unsure if the new American Government would grant them equal rights, given the persecution and expulsion the Jewish people had faced in so many times and in so many places.  In response, George Washington penned his famous 1790 letter to the members of Newport’s Touro Synagogue, reassuring American Jews that, in the United States, their religious liberty would be protected.  He further invoked the prophet Micah, hoping that the “Children of the Stock of Abraham, who dwell in this land, continue to merit and enjoy the good will of the other Inhabitants; while everyone shall sit in safety under his own vine and fig tree, and there shall be none to make him afraid.”  Since then, the unique American promise of religious liberty for people of all faiths has remained a proud hallmark of our Republic.

Today, we recognize the resilience of the Jewish community in the face of great adversity and celebrate the countless ways Jewish Americans have strengthened our Nation.  We echo the words of President Washington and Rabbi Akiva and stand in solidarity with our American Jewish neighbors as we reaffirm our commitment to combat all forms of hate and anti-Semitism.

NOW, THEREFORE, I, DONALD J. TRUMP, President of the United States of America, by virtue of the authority vested in me by the Constitution and the laws of the United States, do hereby proclaim May 2019 as Jewish American Heritage Month.  I call upon Americans to celebrate the heritage and contributions of American Jews and to observe this month with appropriate programs, activities, and ceremonies.

IN WITNESS WHEREOF, I have hereunto set my hand this
thirtieth day of April, in the year of our Lord two thousand nineteen, and of the Independence of the United States of America the two hundred and forty-third.