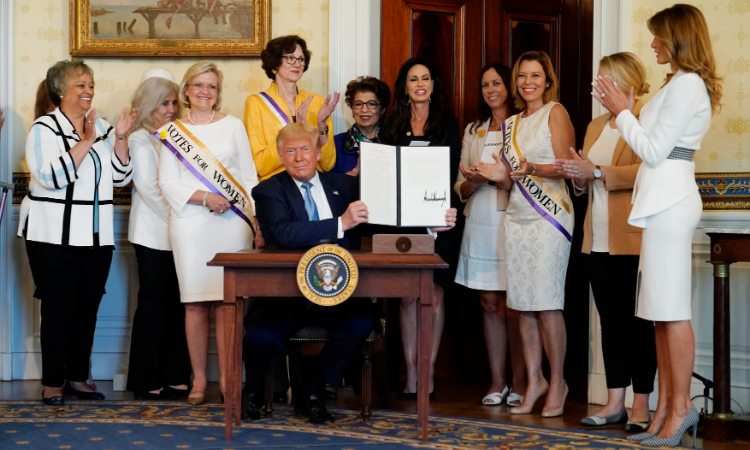 President Donald Trump holds a signed proclamation recognizing the 100th anniversary of the ratification of the 19th Amendment with first lady Melania Trump, far right, Tuesday, Aug. 18, 2020, in the Blue Room of the White House in Washington. (AP Photo/Patrick Semansky)

Proclamation on 100th Anniversary of the Ratification of the 19th Amendment
Issued on: August 18, 2020

On this day in 1920, the 19th Amendment to our Constitution was ratified, securing the right to vote for women and marking a monumental step toward the “more perfect Union” envisioned by our Founders.  This milestone in American history was the product of the tireless efforts of suffragists and other advocates for women’s rights, who steadfastly pursued their vision of a more just and equal society.

In the early days of our Nation’s fight for independence, future First Lady Abigail Adams penned a letter to her husband, John Adams, urging him to “remember the ladies” as he fought to preserve the fledgling United States.  She advised him that “if particular care and attention is not paid to the ladies, we are determined to foment a rebellion, and will not hold ourselves bound by any laws in which we have no voice or representation.”  In the decades that followed, bold trailblazers like Susan B. Anthony, Elizabeth Cady Stanton, Harriet Forten Purvis, and Frances Ellen Watkins Harper carried forward and fought for the fundamental right of women to vote.  The road to suffrage was long and challenging, but the faith, fortitude, and resolute determination of those committed to this noble cause brought about a victory that continues to inspire today.

As we commemorate this historic event, we also celebrate the incredible economic, political, and social contributions women have made to our Nation.  As President, I am committed to building on these accomplishments and empowering all women and girls to achieve their fullest potential.  As part of this effort, in February of last year, my Administration launched the Women’s Global Development and Prosperity Initiative, the first whole-of-government effort to advance women’s economic empowerment around the globe.  My Administration also released our Strategy on Women, Peace, and Security in June of last year to increase the political participation of women at home and abroad, recognizing that women’s participation in conflict resolution and ending violent extremism can set the course toward a more peaceful world.  We are also prioritizing the safety and well-being of women and girls through our commitment to combatting sex trafficking and empowering survivors, who are disproportionately women, and through Operation Lady Justice, the Presidential Task Force on Missing and Murdered American Indians and Alaska Natives.

My Adminstration also understands that empowering women means implementing an economic agenda that enhances freedom and creates opportunities for women and working families.  As part of this effort, the historic 2017 Tax Cuts and Jobs Act doubled the Child Tax Credit, and I signed legislation that provided for the largest ever increase in funding for the Child Care and Development Block Grant, which will help ease the burden of child care borne disproportionately by mothers.  Additionally, in December of last year, I signed legislation providing for 12 weeks of paid parental leave for Federal employees.  As I have since my first day in office, I continue to call on the Congress to pass a nationwide paid family leave program.

My Administration’s unprecedented investment in working families is already paying dividends.  Women’s unemployment in the United States reached the lowest level in 65 years.  And in 2019, women filled 71 percent of all new jobs in the United States.

Today, as we celebrate a major step forward for our Nation, we pay tribute to the countless women, known and unknown, throughout our history who struggled for equality.  In doing so, we recommit to ensuring our Constitution is faithfully upheld so that all Americans can pursue their dreams and fulfill their God-given potential.

IN WITNESS WHEREOF, I have hereunto set my hand this eighteenth day of August, in the year of our Lord two thousand twenty, and of the Independence of the United States of America the two hundred and forty-fifth.