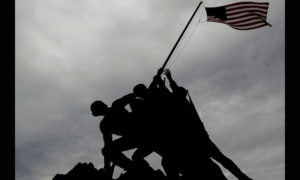 In the long record of American heroism in combat, few episodes capture the indomitable will and the stouthearted spirit of the American warrior better than the triumphs on the island of Iwo Jima in early 1945. Seventy-five years later, we pay tribute to the immeasurable sacrifice of those killed in action on Iwo Jima, and we honor the heroic efforts of all who took part in one of the most costly and significant battles in our country’s history.

By February 1945, despite American forces possessing aerial and naval supremacy, the Japanese forces at Iwo Jima were well dug-in and prepared to fight to the last man for the strategically important airfields on this small piece of land. This was the first time in World War II that the Japanese were defending what they considered home soil. For 5 weeks, our Marines and Navy sailors endured a harrowing trial by fire, fighting to secure this remote volcanic island from more than 20,000 determined Japanese soldiers. Nearly 7,000 Americans died in the effort.

The fighting on Iwo Jima was some of the bloodiest and most costly in all of World War II, but it also gave rise to some of the greatest examples of patriotism and heroism in our Nation’s history, inspiring Admiral Chester Nimitz’s famous statement that “uncommon valor was a common virtue.” Few images evoke as much emotion from the American soul as Joe Rosenthal’s photo of six Marines raising our Flag atop Mount Suribachi in the opening days of the battle. In addition, 27 Medals of Honor—the highest honor given to members of the military—were awarded for actions of conspicuous gallantry during the battle. Of these, 22 medals went to Marines, making up more than 25 percent of the total Medals of Honor awarded to Marines throughout the entirety of the war.

Among the heroes at Iwo Jima were non-combatants, like Rabbi Roland Gittelsohn. In the days following the battle, Rabbi Gittelsohn delivered a powerful, stirring message at the Fifth Marine Division cemetery on Iwo Jima. There, he stated, “Here lie officers and privates, blacks and whites, rich and poor together. Here are Protestants, Catholics, and Jews together. Here no man prefers another because of his color.” For his service ministering to men in the thick of the combat zone, Rabbi Gittelsohn was awarded three service ribbons, and today his words resonate as a powerful testament to the founding principle of our Nation that liberty and democracy are the rights of all men and women of every race, religion, and creed.

On this anniversary, we honor those who answered the call of duty and ensured that the forces of freedom emerged victorious in that fateful battle. As a Nation, we remain forever indebted to the Greatest Generation.