Home Home | News & Events | President Trump’s Proclamation on Days of Remembrance of Victims of the Holocaust, 2019 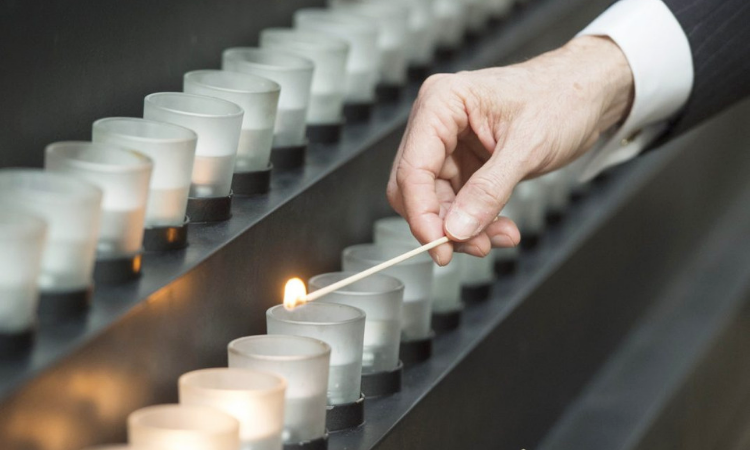 Proclamation on Days of Remembrance of Victims of the Holocaust, 2019

On Yom HaShoah, Holocaust Remembrance Day, and during this week of solemn remembrance, we honor the six million Jewish men, women, and children who were brutally murdered by the Nazi regime.  We also remember the Roma and Sinti, persons with disabilities, Poles and Slavic ethnic groups, Soviet prisoners of war, Jehovah’s Witnesses, and persons who were targeted based on their sexual orientation, all of whom were targeted and killed by the Nazis and their collaborators.

The Holocaust will forever haunt the conscience of humanity.  Unchecked evil and hatred led to unprecedented depravity and destruction.  The Nazi regime sought to exterminate entire populations of those they deemed undesirable.  Millions of Jewish people were forced into ghettoes and slave labor camps in which starvation, widespread disease, and senseless brutality took a devastating toll.  Many of those who survived were sent to concentration and death camps, in which millions of Jews were murdered in gas chambers and other facilities built for daily human massacre.

In Hebrew, the day commemorating victims of the Holocaust is called “Yom HaShoah Ve-Hagevurah,” which means the “Day of (Remembrance of) the Holocaust and the Heroism.”  As we honor the victims of the Holocaust, we also celebrate the survivors and daring rescuers who overcame horrific injustices, endless nights of darkness, and daunting odds.  Survivors of the Holocaust endured firsthand hatred and evil that sought to extinguish human life, dignity, and freedom.  When the heroic American and Allied forces liberated them, the survivors had every right to sorrow and bitterness, but instead, they inspired all of humanity with their unbreakable spirit and the prevailing power of hope and forgiveness over horror and hatred.

Simon Wiesenthal, a Jewish-Austrian Holocaust survivor who endured five different labor and concentration camps to live to the age of 96, spent his life showing the world the depravity of the Nazis so that the haunting truths of the Holocaust would never fade.  In his memoirs, he recounted being told by a Nazi guard that it was worthless to tell the story of the Holocaust because no one would ever believe such things were possible.

On Yom HaShoah, and during this week of remembrance, we join Simon Wiesenthal in refuting his captor and strongly reaffirm our everlasting commitment to honor the victims and survivors of the Holocaust, who through their courageous testimony, fulfill the righteous duty never to forget.  We vow never to remain silent or indifferent in the face of evil.  With absolute devotion, we will continue to advance human rights, combat anti-Semitism, and dispel all forms of hatred in every part of the world.

NOW, THEREFORE, I, DONALD J. TRUMP, President of the United States of America, do hereby ask the people of the United States to observe the Days of Remembrance of Victims of the Holocaust, April 28 through May 5, 2019, and the solemn anniversary of the liberation of Nazi death camps, with appropriate study, prayers and commemoration, and to honor the memory of the victims of the Holocaust and Nazi persecution by remembering the lessons of this atrocity so that it is never repeated.

IN WITNESS WHEREOF, I have hereunto set my hand this twenty-sixth day of April, in the year of our Lord two thousand nineteen, and of the Independence of the United States of America the two hundred and forty-third.