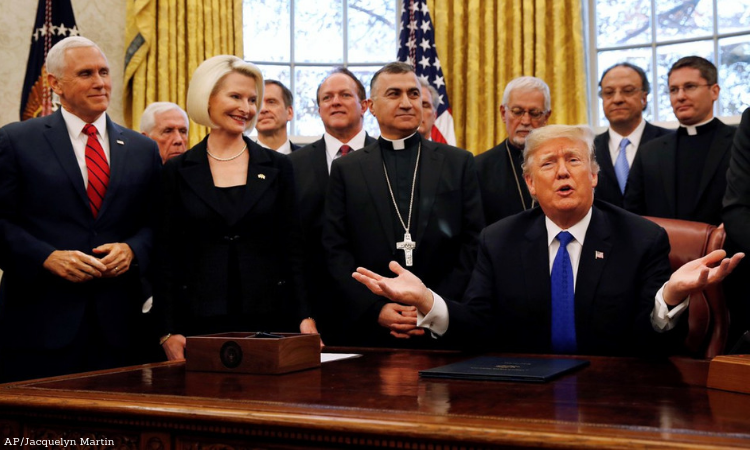 H.R. 390, the “Iraq and Syria Genocide Relief and Accountability Act of 2018,” which authorizes assistance to entities engaged in aiding individuals and communities in Iraq or Syria who are being, or are likely to be, targeted for genocide, crimes against humanity, or war crimes.

THE PRESIDENT:  Well, thank you very much.  We appreciate it.  In a few moments, I will sign legislation to assist religious and ethnic groups targeted by ISIS for mass murder and genocide in Syria and Iraq.  The bill also authorities U.S. government efforts to help bring preparations and perpetrators of these heinous crimes to justice, and to justice very swiftly.

THE PRESIDENT:  Thank you very much.  I appreciate it. Ambassador Sam Brownback for joining us today.

I also want to recognize the members of Congress in attendance — Leader Kevin McCarthy.  And thank you very much, Kevin, for everything.  And congratulations on the ascension.

THE PRESIDENT:  You’re going to do fantastically.  Thank you, Kevin.

And Representatives Chris Smith, Anna Eshoo, Michael McCaul, Steve Pearce, and somebody that nobody has ever heard of, Mark Meadows.  (Laughter.)

We’re also honored to have an inspiring group of religious leaders, scholars, and advocates with us today.  And I want to thank you all for being here.  Tremendous people.

In recent years, ISIS has committed horrifying atrocities against religious and ethnic minorities in Syria and Iraq, including Christians, Yazidis, Shia, and other groups.  And beyond the — beyond the various groups, they’ve just been devastating to a lot of people.

And I have to say, we’ve done a very, very major job on ISIS.  There are very few of them left in that area of the world.  And within another 30 days, there won’t be any of them left.

Since I took office, we’ve driven ISIS out of nearly all of the territory it once held in Syria and Iraq, devastating the caliphate.  You’ve been reading about it.  It’s actually been covered reasonably fairly, which isn’t bad.

This bill continues my administration’s efforts to direct U.S. assistance toward persecuted communities, including through faith-based programs.  It also allows the government agencies to assist a range of entities in investigating and prosecuting ISIS’s despicable acts.  And they are very despicable indeed.

Today, we honor the memory of all those killed by ISIS in Syria and Iraq, and we renew our sacred commitment to religious freedom.

And I will now sign the bill, and I want to thank you all very much for being here.  It’s a great honor.  Very, very important.  Great honor.  Thank you.

(The bill is signed.)