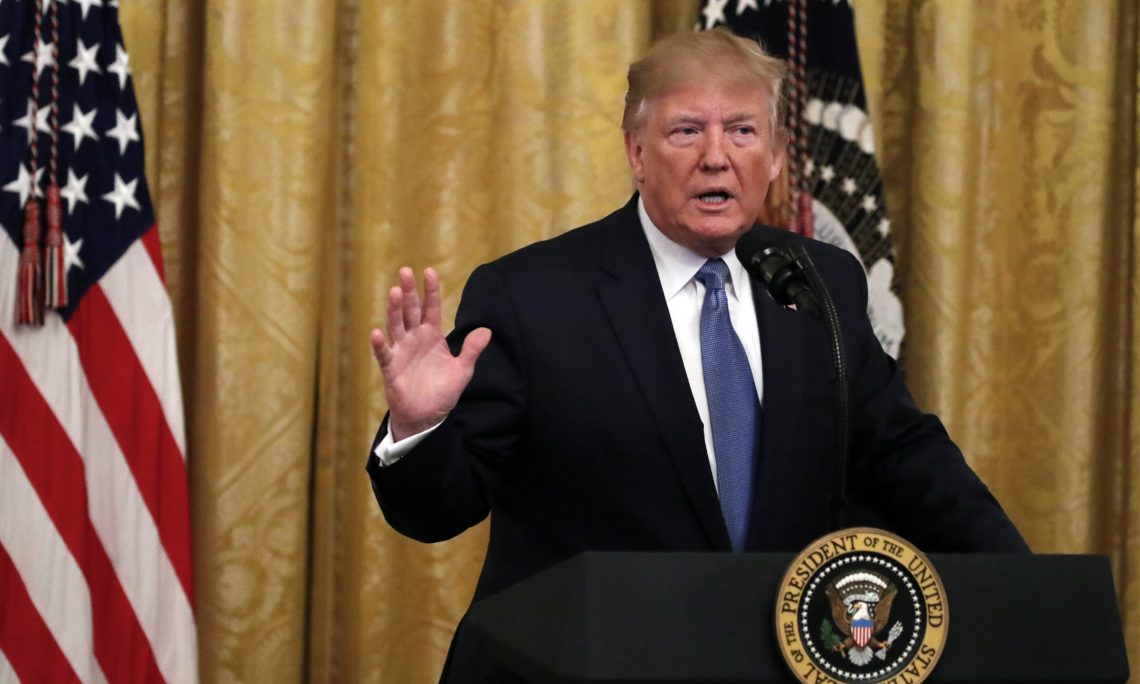 President Donald Trump speaks during an event about the environment in the East Room of the White House, Monday, July 8, 2019, in Washington. (AP Photo/Alex Brandon)

FACT SHEET
President Donald J. Trump is Promoting a Clean and Healthy Environment for All Americans
Issued on: July 8, 2019

The United States environmental record is one of the strongest in the world and America continues to make environmental progress in clean air and clean water.
From 1970 to 2018, the combined emissions of the most common air pollutants fell 74 percent while the economy grew over 275 percent.
While energy-related CO2 emissions increased slightly in 2018 due to weather and economic growth, emissions are projected to decline in 2019 and 2020.
The United States is ranked number one in the world for access to clean drinking water and of the top 10 countries, the United States has by far the largest population.
Under the Trump Administration, the United States is experiencing historic economic growth and has become the world’s leading oil and natural gas producer.

ENVIRONMENTAL STEWARDSHIP: President Trump and his Administration have taken action to restore, preserve, and protect America’s land, air, and waters.

In 2018, the President signed the Save Our Seas Act which reauthorizes the NOAA Marine Debris Program, promotes international action to reduce marine debris, and authorizes cleanup and response actions needed as a result of severe marine debris events.
This follows executive action by the President to improve Federal coordination on matters involving ocean, coastal, and Great Lakes waters, including prioritizing research and technology needs and expanding public access to ocean-related data.
The Environmental Protection Agency (EPA) is working harder than ever to clean up our Nation’s contaminated lands and hazardous sites.
In FY 2018, EPA completed cleanup work on all or part of 22 Superfund sites from the National Priorities List, the largest number in any one year since 2005.
Last month, EPA selected 149 communities to receive nearly $65 million in Brownfields grants.
Forty percent of these communities will receive clean-up grants for the first time.
The President has directed EPA to more efficiently implement air quality standards to improve America’s air quality to better protect human health and the environment.
The Trump Administration has prioritized funding for environmental restoration projects in the Florida Everglades, including more than $500 million to accelerate completion of Herbert Hoover Dike rehabilitation at Lake Okeechobee.

Earlier this year, President Trump signed the largest public lands legislation in a decade, designating 1.3 million new acres of wilderness.
The Department of the Interior has proposed to open more than a million acres across the country for expanded hunting and fishing access, ensuring that hunters, anglers, and outdoor enthusiasts are able to enjoy fully our Nation’s lands and waters.
To prevent devastating forest fires, President Trump took action to improve management of forests under Federal supervision and worked with State and local leaders to do the same.