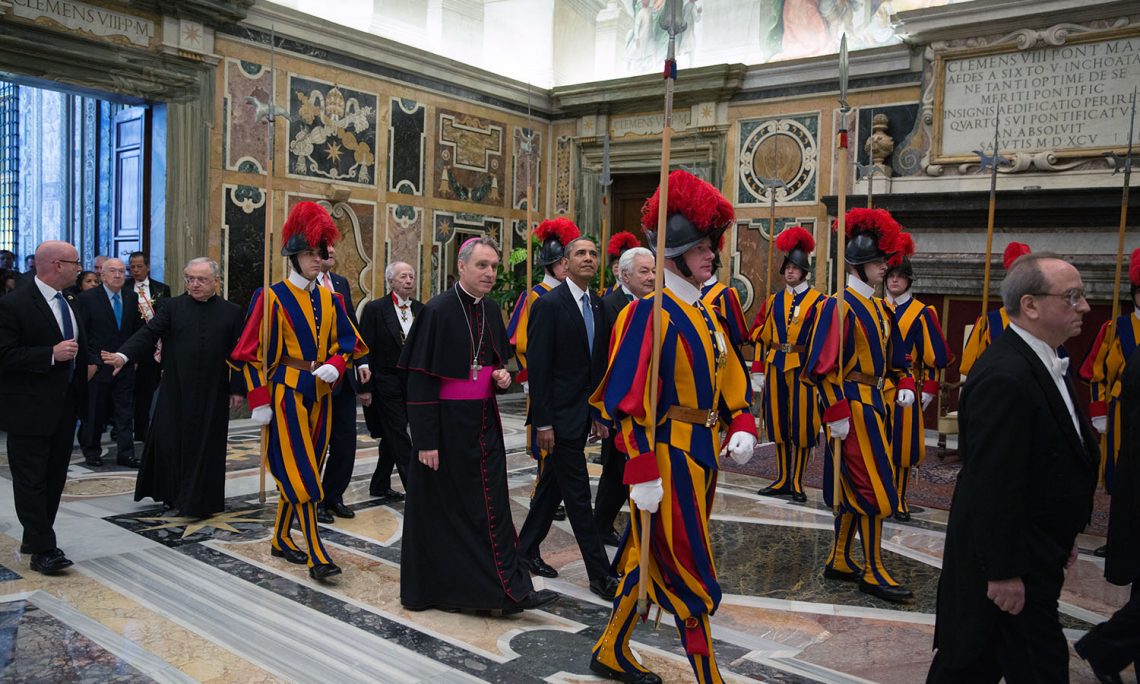 President Barack Obama is escorted through the Vatican by Archbishop Georg Ganswein, Prefect of the Pontifical Household, and the Swiss Guard for his meeting with Pope Francis, March 27, 2014. (Official White House Photo by Pete Souza)

On the morning of March 27, the Pope’s palace in Vatican City was a slightly different scene. The American flag was waving in the courtyard. The Swiss Guard – the Pope’s bodyguards – stood at attention in ceremonial dress. Dozens of journalists were lined up eager to start clicking as soon as the 13-car motorcade pulled up. And Vatican officials and embassy staff were in place, ready to receive our embassy’s biggest visitor of the year – the President of the United States.

On that morning, President Obama arrived at Vatican City to meet Pope Francis for the first time – and I and Embassy Vatican staff were lucky to have a front row seat! I arrived in the President’s motorcade at the palace. The Prefect of the Papal Household greeted President Obama and escorted him to the Papal Library – the Pope’s office – passing through rooms with stunning frescoes and artworks dating back several centuries. The Apostolic Palace is the third largest palace in the world, housing pieces from great artists such as Raphael, the School of Caravaggio, and even Michelangelo’s last work. It was also the official papal residence from 1871 until Pope Francis chose to stay in the Vatican guest house, Casa Santa Marta, to eschew the traditional pomp and circumstance that goes along with the papacy.

After a lengthy (almost one hour) meeting with Pope Francis focusing on issues of global inequality and the need to help those less fortunate, as well as issues of peace and conflicts around the world, President Obama met with the Vatican’s Secretary of State (prime minister-equivalent) Cardinal Pietro Parolin and discussed global issues in greater detail. The Vatican’s protocol team then escorted the President down the grand “Noble Staircase” of the Palace and back to his motorcade where he was off to meetings with Italian government leaders.

It is easy to see why Pope Francis has become so popular. His welcoming smile, his generous engagement, humble and spontaneous approach, and his focus on the marginalized, poor, and excluded have given not only Catholics but people of all religious traditions around the world renewed hope and faith. And with President Obama’s powerful message of hope and the administration’s focus on alleviating poverty and inequality, it was no wonder that journalists around the world were eager to capture the moment and see what kind of chemistry the two leaders would have. And they were not disappointed.

It’s been an incredible time for me to be U.S. Ambassador to the Holy See, with visits from both President Obama and Secretary Kerry, who met with Cardinal Parolin in January (as well as joining the President last week). And to have all of this happen during our 30th anniversary year of formal diplomatic relations between the United States and the Holy See demonstrates further the importance of our relationship with the Vatican as we continue to partner on global issues to help promote peace and solve conflicts. KH.

You can see more photos of the President’s visit to Vatican City on our Facebook page, at http://www.facebook.com/holysee.usembassy.