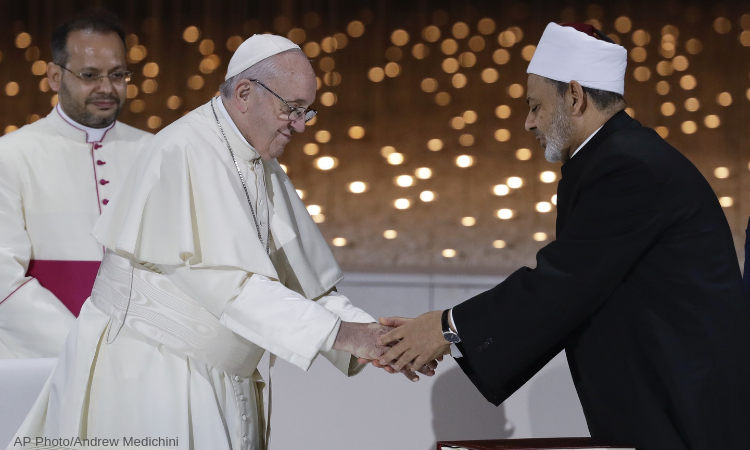 It’s incredible what can happen in just 40 hours.

Pope Francis arrived in Abu Dhabi, capital of the United Arab Emirates on the evening of Sunday, February 3, as the first pontiff to visit the Arabian Peninsula. He departed on Tuesday, February 5, shortly after celebrating a historic Catholic Mass with 135,000 people.

The unprecedented nature of this papal visit is awe inspiring. Never in the history of Christianity and Islam has the Bishop of Rome traveled to the birthplace of the Muslim faith – let alone celebrated a public Mass.

Beyond the historical implications, Pope Francis’s visit to the Arabian Peninsula marked a significant step toward advancing the principals of coexistence and religious freedom, a goal he and Sheikh Ahmed el-Tayeb, the grand imam of Egypt’s Al-Azhar, codified in their joint declaration following the visit.

The United States applauds His Highness Sheikh Mohammed bin Zayed Al Nahyan, Crown Prince of Abu Dhabi, and the UAE government for their invitation. The UAE is host to people from over 200 nationalities who are free to practice their faiths, including Christianity, Islam, Buddhism, and Hinduism.

Bridging tolerance and understanding with the Muslim world has been a central priority of Pope Francis’s pontificate. He has on five occasions met with Sheikh Ahmed el-Tayeb and visited sacred Islamic sites such as Al-Aqsa mosque in Israel and the Blue Mosque in Turkey. His trip to the UAE builds off the well-received visit to Saudi Arabia by the late Cardinal Jean-Louis Tauran in 2018, who headed the Vatican’s Pontifical Council for Interreligious Dialogue.

Earlier this year, Pope Francis told the ambassadors accredited to the Holy See that his visit to the UAE and upcoming trip to Morocco “represent two important opportunities to advance inter-religious dialogue and mutual understanding between the followers of both religions in this year that marks the 800th anniversary of the historic meeting between St Francis of Assisi and Sultan al-Malik al-Kāmil.”

A few days prior to his journey to the Arabian Peninsula, Pope Francis expressed to the news media how hopeful he was that, through interreligious dialogue, his visit could usher in “a new page in the history of relations between religions, confirming that we are brothers and sisters”.

The power of this sentiment – that through tolerance and understanding the great religions of the world can find common humanity – cannot be understated.  These values of religious diversity and dialogue are also unequivocally shared by the United States under President Donald Trump’s leadership.

In his speech in Riyadh to the Arab Islamic American Summit, the President advocated for religious tolerance, freedom, and dialogue: “For many centuries the Middle East has been home to Christians, Muslims and Jews living side-by-side. We must practice tolerance and respect for each other once again—and make this region a place where every man and woman, no matter their faith or ethnicity, can enjoy a life of dignity and hope.”

The United States understands that through interfaith engagement and dialogue, and respect for religious freedom, countries and regions once beset by division and violence can become more peaceful, secure, and prosperous.

We congratulate His Holiness Pope Francis on his historic visit to the Arabian Peninsula and look forward to continuing our important work together to advance religious freedom around the world.