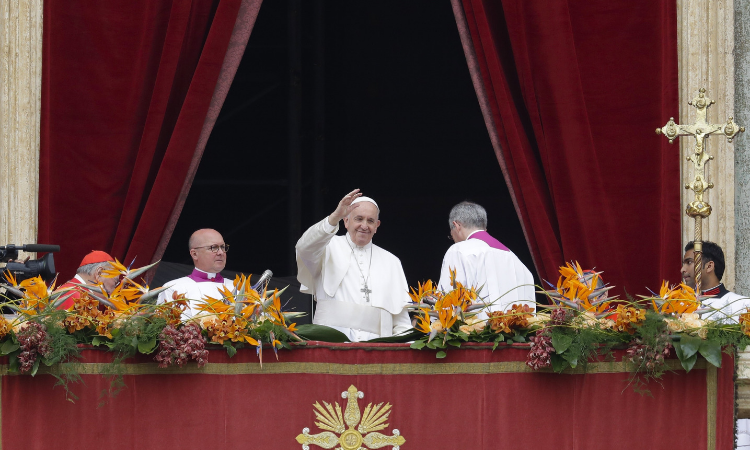 Today the Church renews the proclamation made by the first disciples: “Jesus is risen!” And from mouth to mouth, from heart to heart, there resounds a call to praise: “Alleluia, Alleluia!” On this morning of Easter, the perennial youth of the Church and of humanity as a whole, I would like to address each of you in the opening words of my recent Apostolic Exhortation devoted especially to young people:

“Christ is alive! He is our hope, and in a wonderful way he brings youth to our world. Everything he touches becomes young, new, full of life. The very first words, then, that I would like to say to every young Christian are these: Christ is alive and he wants you to be alive! He is in you, he is with you and he never abandons you. However far you may wander, he is always there, the Risen One. He calls you and he waits for you to return to him and start over again. When you feel you are growing old out of sorrow, resentment or fear, doubt or failure, he will always be there to restore your strength and your hope” (Christus Vivit, 1-2).

Dear brothers and sisters, this message is also addressed to every person in the world. The resurrection of Christ is the principle of new life for every man and every woman, for true renewal always begins from the heart, from the conscience. Yet Easter is also the beginning of the new world, set free from the slavery of sin and death: the world open at last to the Kingdom of God, a Kingdom of love, peace and fraternity.

Christ is alive and he remains with us. Risen, he shows us the light of his face, and he does not abandon all those experiencing hardship, pain and sorrow. May he, the Living One, be hope for the beloved Syrian people, victims of an ongoing conflict to which we risk becoming ever more resigned and even indifferent. Now is instead the time for a renewed commitment for a political solution able to respond to people’s legitimate hopes for freedom, peace and justice, confront the humanitarian crisis and favour the secure re-entry of the homeless, along with all those who have taken refuge in neighbouring countries, especially Lebanon and Jordan.

Easter makes us keep our eyes fixed on the Middle East, torn by continuing divisions and tensions. May the Christians of the region patiently persevere in their witness to the Risen Lord and to the victory of life over death. I think in particular of the people of Yemen, especially the children, exhausted by hunger and war. May the light of Easter illumine all government leaders and peoples in the Middle East, beginning with Israelis and Palestinians, and spur them to alleviate such great suffering and to pursue a future of peace and stability.

May conflict and bloodshed cease in Libya, where defenceless people are once more dying in recent weeks and many families have been forced to abandon their homes. I urge the parties involved to choose dialogue over force and to avoid reopening wounds left by a decade of conflicts and political instability.

May the Living Christ grant his peace to the entire beloved African continent, still rife with social tensions, conflicts and at times violent forms of extremism that leave in their wake insecurity, destruction and death, especially in Burkina Faso, Mali, Niger, Nigeria and Cameroon. I think too of Sudan, presently experiencing a moment of political uncertainty; it is my hope that all voices will be heard, and that everyone will work to enable the country to find the freedom, development and well-being to which it has long aspired.

May the Risen Lord accompany the efforts of the civil and religious authorities of South Sudan, sustained by the fruits of the spiritual retreat held several days ago here in the Vatican. May a new page open in the history of that country, in which all political, social and religious components actively commit themselves to the pursuit of the common good and the reconciliation of the nation.

May this Easter bring comfort to the people of the eastern regions of Ukraine, who suffer from the continuing conflict. May the Lord encourage initiatives of humanitarian aid and those aimed at pursuing a lasting peace.

May the joy of the resurrection fill the hearts of those who on the American continent are experiencing the effects of difficult political and economic situations. I think in particular of the Venezuelan people, of all those who lack the minimal conditions for leading a dignified and secure life due to a crisis that endures and worsens. May the Lord grant that all those with political responsibilities may work to end social injustices, abuses and acts of violence, and take the concrete steps needed to heal divisions and offer the population the help they need.

May the Risen Lord shed his light on the efforts made in Nicaragua to find as rapidly as possible a peaceful negotiated solution for the benefit of the entire Nicaraguan people.

Before the many sufferings of our time, may the Lord of life not find us cold and indifferent. May he make us builders of bridges, not walls. May the One who gives us his peace end the roar of arms, both in areas of conflict and in our cities, and inspire the leaders of nations to work for an end to the arms race and the troubling spread of weaponry, especially in the economically more advanced countries. May the Risen Christ, who flung open the doors of the tomb, open our hearts to the needs of the disadvantaged, the vulnerable, the poor, the unemployed, the marginalized, and all those who knock at our door in search of bread, refuge, and the recognition of their dignity.

Dear brothers and sisters, Christ is alive! He is hope and youth for each of us and for the entire world. May we let ourselves be renewed by him! Happy Easter!