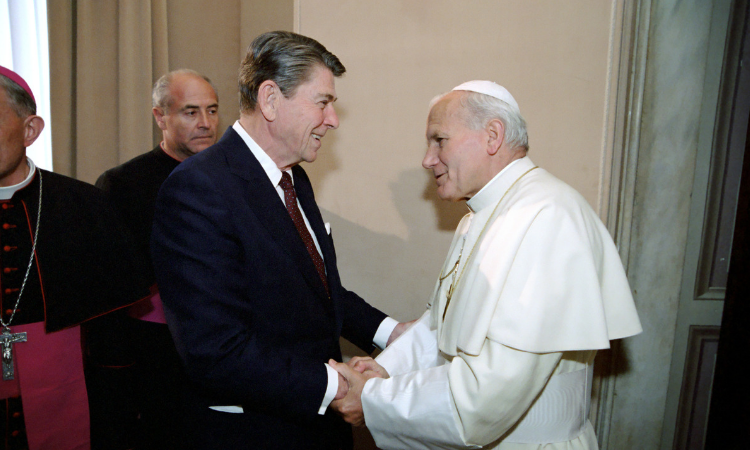 (published in the National Catholic Register on June 7, 2019)

By Callista L. Gingrich, U.S. Ambassador to the Holy See

Forty years ago this week, Saint John Paul II returned to his native Poland as the newly elected Bishop of Rome.  It was the first time in history that a Pope visited a Communist country.

From June 2-10, 1979, the Polish pontiff traveled across the nation of his birth, delivering more than 50 speeches, and inspiring a revolution of conscience that would transform Poland and reshape the spiritual and political landscape of the 20th century.

Millions of Poles, crushed under the weight of Soviet tyranny, turned out to see the Holy Father.  On the first day of his pilgrimage, in Warsaw’s Victory Square, Pope John Paul II declared, “There can be no just Europe without the independence of Poland marked on its map!”

It was a proclamation heard across the world – and by a future U.S. president in California.

Ronald Reagan was elated.  At the time, he hosted a popular radio show and dedicated numerous broadcasts to John Paul II’s historic pilgrimage.  “It has been a long time since we’ve seen a leader of such courage and such uncompromising dedication to simple morality,” Reagan said.

A few months later in November of 1979, the former Governor of California announced his candidacy for President of the United States.  Soon after taking office, the President requested a meeting with the Pope.

The two leaders met in Vatican City in 1982, and it was then that President Reagan asked Pope John Paul II when he thought Eastern Europe would be free from Soviet domination.  When the Pope responded, “In our lifetime,” the President took his hand and asked the Pope that together they make it happen.

When he returned to the United States, the President instructed the U.S. State Department to work closely with the Vatican.  He ordered a full-fledged embassy to be opened.  Two years later, in 1984, the U.S. Embassy to the Holy See was established.

Before that time, the United States and the Holy See enjoyed a respectful, although unofficial relationship.  This new relationship, as President Reagan said, “would exist to the benefit of peace-loving people everywhere.”

The Polish Pope and the American President were under no delusions about the tough task ahead in defeating Soviet Communism, which had already claimed tens of millions of lives. The Soviet Union’s collapse into the “ash-heap of history” on December 25, 1991, would not have been possible without their leadership.

Of course, the necessity of this historic partnership did not end with the fall of the Berlin Wall.  Today, our governments face different challenges —equally great and perilous.  From responding to humanitarian crises, to safeguarding human rights, to mediating and preventing conflict and violence, our partnership is a global force for good.

Like the United States, the Holy See engages on every continent, with access and credibility in the world’s most troubled areas – in places many governments are unable to work.

The U.S. Embassy to the Holy See relies on this enormous reach and influence.  We serve as an engagement post – leveraging the Vatican’s network to promote our shared priorities around the world.

Our efforts would not have been possible without the vision and commitment of President Reagan and Saint John Paul II.  Their partnership paved the way; and their example is ever-present.

The U.S. Embassy to the Holy See proudly honors and upholds this great legacy.