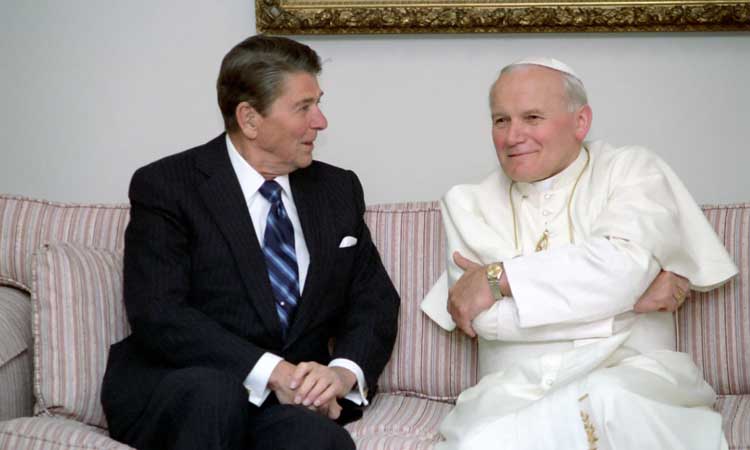 Published in the Catholic News Agency on April 9, 2019

Thirty-five years ago today, William A. Wilson presented his credentials to Pope John Paul II, becoming America’s first ambassador to the Holy See. This historic moment marked the start of formal diplomatic relations between the United States and the Vatican.

Although our embassy was officially established in 1984, ties to the Holy See date back to our nation’s founding. The early years saw the appointment of consuls and resident ministers to what was then the Papal States. Relations temporarily ended in 1870 following Italian Unification. The United States and the Holy See, however, continued to engage at a distance.

Throughout our history, U.S. presidents have recognized the important role of the Holy See in advancing peace and justice. From 1870 to 1984, several personal envoys were dispatched to the Vatican for discussions on humanitarian and political issues. During World War II, President Franklin Roosevelt’s envoy to Pope Pius XII worked with the Holy See to feed European refugees, provide aid to Eastern Europe, and assist allied prisoners of war.

But as the Second World War gave way to the Cold War, the destructive force of the Soviet Union threatened to sweep across the free world. Millions died under the thumb of communist rule and many more continued to suffer under its tyranny.

Two leaders were determined to change this: President Ronald Reagan and Pope John Paul II. They quickly realized that an unofficial relationship between the United States and the Holy See was no longer adequate to meet the dangers posed by Communism.

Soon after taking office, President Reagan requested a meeting with Pope John Paul II. When the two leaders met in Vatican City in 1982, President Reagan asked the Polish pontiff when Eastern Europe would be free from Soviet domination. When the Pope responded “in our lifetime,” the President grabbed his hand and said fervently “let’s work together!”

President Reagan returned to Washington D.C., and within two years established official diplomatic relations with the Vatican. When Ambassador Wilson presented his credentials to Pope John Paul II on April 9, 1984, the Pope told him that renewed collaboration between the United States and the Holy See should mean “exerting common efforts to defend the dignity and the rights of the human person.”

For the last 35 years, this unique partnership has done just that. It has existed, in President Reagan’s words “to the benefit of peace-loving people everywhere.”

Today the United States and the Holy See are a world-wide force for good – safeguarding religious freedom, defending human rights, and seeking peaceful solutions to crises around the world.

As we celebrate our 35th anniversary, the U.S. Embassy to the Holy See is honored to continue this great legacy of friendship and collaboration with the Vatican.