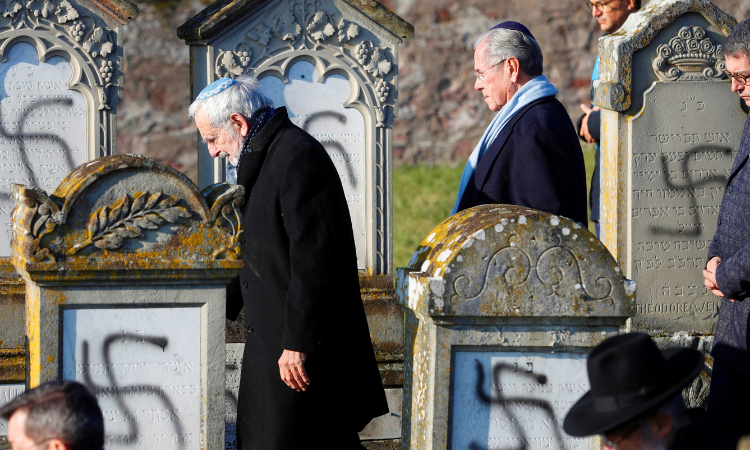 Members of the Jewish community walk amid vandalized tombs in the Jewish cemetery of Westhoffen, west of the city of Strasbourg, eastern France, Wednesday, Dec. 4, 2019. Regional authorities in eastern France say vandals have scrawled anti-Semitic inscriptions, including swastikas spray-painted in b

Ambassador Callista Gingrich: US fighting anti-Semitism at home and abroad
As President Trump has made clear, anti-Semitism is not only a Jewish problem. It is an assault on our humanity
(op ed by Ambassador Gingrich published by Fox News on November 19, 2020)

Seventy-five years after the liberation of the Auschwitz death camp and the defeat of Nazism, anti-Semitism is on the rise.

In many places around the world, Jews are vilified, demonized, and physically attacked. This increase in incidents is being reported across the globe.

In the United States, the rate of anti-Semitic incidents has risen to near-historic levels, punctuated by a deadly massacre in Pittsburgh, a horrific attack in Jersey City, and ongoing attacks in New York City, where more than half of the hate crimes in 2019 targeted Jewish people.

In Europe, according to a 2018 survey by the European Union Agency for Fundamental Rights, nearly 80 percent of European Jews believe anti-Semitism is a growing problem, and 40 percent live in daily fear of being attacked.

The United Nations released an unprecedented report in 2019 identifying anti-Semitism as a serious human rights issue, which is “toxic to democracy and mutual respect of citizens and threatens all societies in which it goes unchallenged.”

Knowledge about the Holocaust is woefully inadequate. A September 2020 survey among young Americans revealed a clear lack of awareness of key historical facts: 31 percent of those surveyed did not know when the Holocaust happened; 63 percent did not know that 6 million Jews were killed; and 48 percent could not name a single concentration camp.

This is unconscionable, and every free society has a stake in reversing this trend. As President Trump has made clear, anti-Semitism is not only a Jewish problem. It is an assault on our humanity and demands resolute action.

Under President Trump’s leadership, the United States has taken bold action to raise awareness of the Holocaust and confront the rise of anti-Semitism at home and abroad.

As the president said earlier this year in marking the 75th anniversary of the liberation of Auschwitz, “[We] recommit ourselves to the fight against anti-Semitism and to the two words that cannot be repeated often enough: Never Again.”

Assuring such atrocities will never again occur requires action. In 2018, President Trump signed the Justice for Uncompensated Survivors Today Act, which requires the U.S. Department of State to report to Congress on steps taken by 47 countries to compensate Holocaust survivors and their heirs for assets seized by Nazi Germany and postwar communist governments.

The president also issued an Executive Order in 2019 ensuring that enforcement of Title VI of the Civil Rights Act of 1964 extends to anti-Semitic discrimination. And last month the U.S. Department of State aired it’s first-ever conference on combatting anti-Semitism online.

The United States government is pressing other governments to provide adequate security for their Jewish populations and is advocating for the investigation, prosecution, and punishment of hate crimes. It is calling on countries to remove anti-Semitic content from textbooks in publicly funded schools, to promote Holocaust education, and to condemn hate speech wherever it occurs.

International cooperation is critical to these efforts. The United States currently works with the European Union, the Organization for Security and Cooperation in Europe, the International Holocaust Remembrance Alliance (IHRA), and other international organizations to confront and combat anti-Semitism.

The Muslim-Jewish Advisory Council in the United States is one example of successful interfaith cooperation, bringing together leaders in the American Jewish and Muslim communities to advocate for issues of common concern. Similarly, the Muslim-Jewish Leadership Council in Europe unites prominent figures from both communities to “free religious people and religions from prejudice, false claims, attacks, and violence.”

At the Vatican, Pope Francis is a significant ally in the fight against anti-Semitism and Holocaust denial. In his message to the Simon Wiesenthal Center in January, Pope Francis called upon all of us to keep the memory of the Holocaust alive. “If we lose our memory, we destroy our future,” he warned.

In March, Pope Francis opened the Apostolic Archives of Pope Pius XII. Many Jewish organizations have expressed support for this decision and the availability of the records is “enormously important to Catholic-Jewish relations,” according to Rabbi David Rosen, the Director of Interreligious Affairs for the American Jewish Committee (AJC).

In response to the great challenge of anti-Semitism and reaffirming our steadfast support for the Jewish community, the U.S. Embassy to the Holy See is hosting a virtual symposium Thursday titled “Never Again:  Confronting the Global Rise of Anti-Semitism.”

Leading experts are discussing the importance of Holocaust remembrance and education and sharing best practices for confronting the disturbing rise of anti-Semitism around the world.

I am pleased that U.S. Special Envoy to Monitor and Combat Anti-Semitism Elan Carr and Holy See Secretary of State Cardinal Pietro Parolin are participating in this important symposium.

With dialogue and cooperation across governments, faith communities and civil society we can confront anti-Semitism, sow the seeds of peace, and reaffirm our commitment to the eternal promise: Never again.