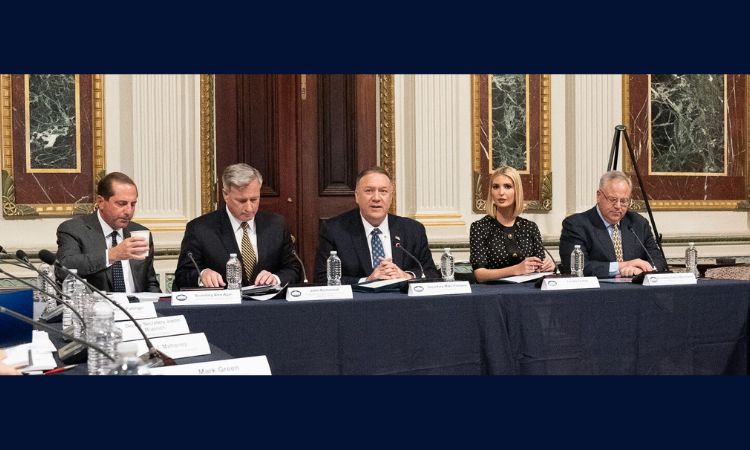 Today, I was honored to convene the Trump Administration’s third meeting of the President’s Interagency Task Force to Monitor and Combat Trafficking in Persons, a cabinet-level entity that consists of 20 agencies across the federal government responsible for coordinating U.S. efforts to combat all forms of human trafficking. I was joined by Deputy Secretary Biegun and Advisor to the President Ivanka Trump.

Task Force members underscored the Administration’s strong commitment to combating human trafficking, commemorated the 20th anniversary of the Trafficking Victims Protection Act of 2000, pledged to build on 20 years of progress in the anti-trafficking movement, and discussed key State Department initiatives.  This year’s Presidential Award for Extraordinary Efforts to Combat Trafficking in Persons was presented to A21 North Carolina for its work to reduce vulnerability and provide essential aftercare services to survivors, and to the Navajo Nation for its leadership in preventing and combating human trafficking in Native communities.

Our civil society partners have reported that residential shelters have cut back services, governments have redirected resources to COVID-19 responses, borders have closed, economies have slowed dramatically, and traffickers have exploited COVID-19 restrictions to profit even more from sex and labor trafficking.  In response to the impact of COVID-19 on efforts to combat human trafficking around the world, the State Department announced earlier this year, a year-long open competition for proposed projects to address this impact and to support government responses.  In the coming months, this initiative will provide up to $3.5 million in foreign assistance funds to support organizations operating in rapidly changing environments and facing the short- and long-term impacts of COVID-19.

Survivor engagement continues to be a central tenet of the federal government’s and the Department’s approach to combating human trafficking.  In the two years since we established the Human Trafficking Expert Consultant Network, experts have advised the Department on more than 20 matters, informed us on nearly $50 million in new global investments, and contributed to the 2020 Trafficking in Persons Report.  In the coming year, we look forward to the Network’s support on our COVID-19 response.

The State Department’s largest anti-trafficking program – the Program to End Modern Slavery – is a step closer to helping us understand the magnitude of human trafficking.   At the meeting, I shared that the Department and the University of Georgia hosted a forum this year to evaluate the prevalence of human trafficking in six countries around the world.   By combining what we learn from these studies, we will be able to identify the most effective strategies for developing human trafficking estimates that are industry specific and geographically restricted.

Finally, the Department will continue to strongly condemn the Chinese Communist Party’s egregious practice of forced labor, among other human rights abuses, as part of its campaign of repression against Uyghurs and members of other ethnic and religious minority groups in the Xinjiang, and throughout China.  In response, the United States has leveled visa restrictions on PRC government and Chinese Communist Party officials believed to be responsible for such horrific human rights abuses, built coalitions through platforms like the United Nations General Assembly, and issued the Xinjiang Supply Chain Business Advisory.  As long as the CCP continues to perpetrate such abuses, we will continue to work with industry, labor advocates, and other governments to call attention to the issue and pressure the government to immediately halt its unacceptable policy of forced labor.

This Administration is resolute in its commitment to ending human trafficking everywhere in the world.  This horrific crime cannot continue to threaten the safety of communities and individuals, and we will push forward in defeating it.